Главная / Детективы / Love Me If You Must 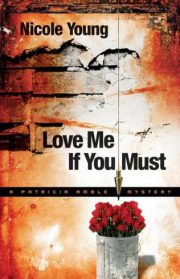 Nicole Young - Love Me If You Must краткое содержание

A run-down Victorian to renovate, a past to leave behind—who has time for romance…or murder? Patricia Amble, Tish to her friends, has gotten her life together. She’s renovating an old, rambling Victorian house in a small town outside of Detroit, and the fixer-upper should net her a big profit when she resells. Romance is right next door, with two attractive neighbors vying for her affection. But even their persistent attentions can’t dispel the sense of unease Tish feels. Voices whisper out of nowhere . . . and something odd is going on in the basement. Soon, Tish begins to question her decision to buy the old house. When a dead body turns up her own dark secrets make her a prime suspect in the current chaos. And is either of her attractive neighbors really who he says he is? What is going on just under the surface of this sleepy small town?

Love Me If You Must - читать книгу онлайн бесплатно, автор Nicole Young

Love Me If You Must

Doug Fix, Escanaba High School Creative Writing Teacher, who asked in the margin of my 11th grade journal, “Do you really believe that?” and set in motion a spiritual journey that continues today.

Old and ugly. And that was being kind. The sprawling Victorian looked like something straight out of a gothic thriller, creepy and broken, looming on the corner of Main and Railroad. Leave it to me to move into the one house in town that could pass for haunted.

The wraparound porch had lost chunks of fieldstone, the balcony above had a distinct sag, and the ancient cupola was ready to lose more than just a few pieces of wood siding. A gnarled catalpa tree, sans leaves, lurked in the side yard, adding to the spook-house effect. And to think it was only three o’clock in the afternoon.

I paused at the curb, hoping I hadn’t made a colossal mistake.

“Patricia Louise Amble,” I said aloud to myself, mimicking the voice of my grandmother. “If you’re smart, you’ll charge admission when the trick-or-treaters come around next week.”

Heaven knew I’d have to come up with something to offset the expense of fixing this place, at least until I could sell it.

Looking at the vacant windows and peeling paint was like looking in a mirror. Turmoil inside. Neglect outside. Doctors would have some fancy label to explain the whole warped line of thinking that led up to the purchase of the Victorian. Post-traumatic delirium, or some such thing.

But there’s hope. Always hope. If not for me, then for the building I’d taken on as my latest Bring It Back to Life project.

I ran my fingers through hair long overdue for a cut and color and started up the crumbling sidewalk toward skewed front steps. Beginning today, the inhospitable abode would be home for one, maybe two years, depending on how stubborn the once proud painted lady decided to be.

I balanced the bag of munchies I’d bought on the way into town on one hip and reached for the storm door. The hinges let out a squeal that set my teeth on edge. Its ’70s metal scrollwork confirmed that a human being had actually cared for this home sometime in the previous century, at least enough to add some weather protection.

Of course, that hadn’t been the only improvement or I would never have considered the property. When I looked through it in July, the prior owners had already gotten a good start toward renovation, beginning with repairs to a leaky foundation and the addition of a second bathroom upstairs. Then a bitter divorce stopped their progress cold.

I dug around in the pocket of my denim jacket for the house key. I couldn’t help but shake my head at the memory of the seller’s attorney changing the closing date yet again.

“Sorry, my client’s wife can’t be located to sign over her half.”

Probably in Mexico spending the last of the joint savings account, I figured, when the man had appeared alone at the closing, with quitclaim deed in hand.

I found the key, inserted it, and gave a half twist. The tumblers screeched. I pushed open the heavy oak door and breathed in the scent of my new home—a light, spicy odor of wood rot combined with half-starved carpet mites.

I had to smile at the thought of all the six-legged microscopic critters writhing in protest as they took their last magic carpet ride out the front door. Every stitch of polyester and olefin fiber would be replaced with good old-fashioned, hypoallergenic hardwood flooring. Today’s buyers loved the open, clean look of real wood. They’d even pay extra for it.

Yep. This place would take a lot of hard work and a good chunk of change to bring up to snuff, but I guessed by the time I was finished, I’d pocket close to double my investment at the sale. Everything I’d read supported my theory of Rawlings, Michigan, becoming the newest fashionable Detroit suburb. It was the next stop along I-75 past Clarkston, and look what had happened to that burg. Homeowners were commanding top dollar for their properties, with nowhere for the prosperity to head but north.

“Let’s get you into a new millennium, old gal.” I patted the doorframe, sure the lady wouldn’t disappoint.

I stepped over the threshold into gloom and silence. The storm door slammed behind me, shaking the four-by-four entryway with its clattering crash. I jumped, nearly donating my turkey croissant and side salad to the ever-greedy rug bugs. I clenched the paper bag containing my only calories ’til morning to my chest and took a few deep breaths to steady my heart. If I were going to survive alone in this creepy place, I’d have to change my reading material from gothic nightmare à la the Brontë sisters, to something a little less terrifying.

“Hello,” came a deep voice from behind me.

I whirled and screamed at the sight of a man’s face pressed close to the glass of the storm door. My supper went flying, landing in a heap against the baseboard.

I flung a hand to my chest. Good grief, I had nearly pelted my first visitor with chunks of lettuce. After a moment, the pounding of my heart calmed to a dull thud in my ears. For lack of words, I bent down to retrieve the salad greens and salvage what remained of my sandwich.

“Sorry. Could I help?” the man asked.

A British accent. How quaint.

I blew the bangs out of my eyes and looked up through the murky glass. If I lived closer to Detroit, there was no way I’d let a stranger in the door. But this was Rawlings. Even through the buildup of water spots and dirt, I could see he looked nice enough. Handsome, too, with a proud, straight nose and squarish jaw. Judging by his clothes, he was only here to drop off an end-of-the-world tract, anyway.

Besides, I’d learned a thing or two about self-defense in my thirty-two years. He’d never get past the inner door of the vestibule without a fight.

The storm door squeaked and his oxfords came into view, bringing with them the smell of new leather. His long-fingered hands fumbled along with mine at the tiny pieces of carrot and cucumber embedded in the inch-high shag.

He grabbed for the cherry tomato at the same time I did. Our skin touched, and I felt my face flush as red as the fruit caught between us. I heard a high-pitched teen-aged titter.

Was that me? I gasped and stood up, banging my forehead against his in my rush to put a safe distance between us—an impossible task in the tiny entry.

“I am so sorry.” Somehow, my hand ended up in his light brown hair, rubbing his scalp like he was a three-year-old with a boo-boo.

Oh, my. I jerked back and stuck my fingers in my own protein-deprived disaster.

Get a grip, Tish. Tish was the name my mother had called me. I’d always preferred it to the usual variations of my name.

“Do you always greet the neighbors with a pat on the head?” the stranger asked, rising. His blue eyes smiled at me, and suddenly I felt less like a complete idiot.

“Neighbor?” The gloom of my two-year sentence in Rawlings lifted.

“David Ramsey. Two doors over in the Greek Revival.”

His house was my favorite in Rawlings. The thing had been restored to its former grandeur. It stuck out in the neighborhood like a diamond among lumps of coal. From my perspective as an investor, the renovation had gone over and beyond what Mr. Ramsey would ever recover upon sale. The rest of the homes in the area just didn’t support the extravagance of the project. But once my Victorian jumped on the restoration bandwagon, every home in a three-block stretch would gain value.

I weighed the idea of asking David Ramsey in beyond the vestibule. It would be neighborly of me, and it couldn’t hurt to get off to a good start. The guy didn’t have fangs, after all.

“Would you like to come in a minute?” The words rushed out before I could stop them.

He gave a nod. “I haven’t been inside this house for some time. I’m curious to know what you have planned for the place.”

That accent again. I refused to swoon.

I opened the inner door and led him through the parlor, past the tiger-oak fireplace. I couldn’t wait to take a bottle of wood restorer to its carved pillars. The front stairs twirling off to one side would get the same treatment.

I trekked through the dining room, doing my best to be hospitable. “I’d offer you something to eat, but I’m afraid you’d remember where it’s been. And the only thing to drink is water from the faucet. Are you up for a little arsenic poisoning?”

I set the paper bag on the kitchen counter and turned to face my guest.

“You’re thinking of the township wells,” he said, leaning against the refrigerator as if he belonged there. “The village water tests pretty good, actually.”

“I’m not taking any chances. I think I’ll stick to my Evian.”

I pulled a bottle out of the bag and twisted off the cap. I’d already ordered the oversize jugs of water and accompanying dispenser that would help cut down on throwaways. I didn’t splurge too many places, but fresh water was nonnegotiable.

I offered my guest the first sip.

“No, no. Really. I just came over to introduce myself.”

His accent had me captivated. As did his khaki slacks and burgundy sweater. I wondered if the cashmere was as soft as it looked. My palm itched, but I controlled the urge to find out.

I sighed. Here was the kind of distinguished guy I’d pegged for myself lo those many years ago when life had been ahead of me instead of down the drain. The kind of guy I’d hoped to meet in college and one day marry.