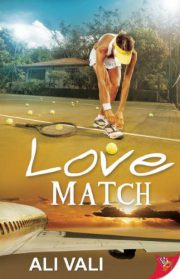 Parker “Kong” King is the number one tennis player in the world with a real talent for getting women in her bed. To prepare herself for the one title she’s never won—and avoid the press and her ex—she retreats to a secluded home in Press Cove, Alabama. There she’ll also be safe from the Soldiers of God who’ve threatened to kill her for what they see as her depraved lifestyle.
Commercial pilot Captain Sydney Parish loves the order that comes from a well-constructed plan for everything, her only failure being her personal life. She hopes a vacation will help heal her bruised heart, but soon finds that might not be possible when she discovers she’s one house over from Parker King.
When Parker and Sydney meet, sparks fly, but not from attraction. They have the summer to see if they have a love match, or will the Soldiers of God kill their chance for a relationship?


Parker King is riding high after winning the prestigious Wimbledon Tournament only to be shot down by a feisty airline pilot named Emily Parish. King Kong as she's known on the courts falls hard, but will it be because of the person who wants to kill her or for love?

Whack. The ball flew over the net at one hundred and thirty miles an hour hitting right inside the line flying off in a wicked slice that proved to be untouchable by the player on the other side. Even the ball boy had a hard time trying to chase it down as it went in a direction he wasn't expecting. The server waited for the boy to get out of the way and for her opponent to get set before she let another one fly.


"Ladies and gentlemen, this is the type of tennis that has been missing from Wimbledon since the time of Martina. This is just an awesome display of straight forward power tennis." The commentator spoke softly into the microphone from the booth to tennis fans watching the match from home. From center court the crowd cheered when the clipped English accent said, "Forty love."


"Yes, Joe, it seems that Parker used her time in England after the French to work on that first service, and isn't Jill sorry about that. It was the one thing that was missing from Parker's arsenical of weapons and now her war chest seems complete. Parker has matured into an outstanding player," continued the female commentator. For a brief moment the woman behind the microphone relived what it was like to be so close to the coveted title Parker King was sure to win by mornings end. The crowd was on their feet again as 'Kong' served up another ace to win the third consecutive game of the first set.


Parker King was the new darling of the tennis world, loved by the crowds that flocked to see her play as well as the companies that lined up to sign her to wear their logos. At a little over six one, shoulder length dark brown hair slightly streaked, skin that was touched by the hours she spent in the sun and eyes the color of blue ice, she was a natural favorite.


Anyone that saw her on a court would have to be blind not to see the fire that burned within her to win. Opponents, no matter what their ranking, cringed when they saw her name on the board as their next game. The power she displayed on the court had earned her the nickname Kong from the fans, and Parker was never one to disappoint getting to the final without dropping a set and losing only eight games in her time in England.


"Jill has got to be more aggressive at the net if she wants to get back into this match," Joe Welch, former male champion said to his two other partners in the booth. The crowd drowned the rest of what he was saying out as Parker returned a lob so hard that the ball bounced into the stands behind her opponent Jill Seabrook after it had bounced just inside the line.


"Love forty," the judge said into the microphone pointing to the King side of the net, followed momentarily by, "Game Miss King." Jill went into her return stance looking defeated already as Parker flashed her coach in the stands a winning smile. Sitting next to him was Parker's guest for the match displaying her own smile down to the number one player in the world. After they collected the title, it was back to the US for the rest of the summer to prepare for the Open, and after a grueling schedule Parker was more than ready for that.


Whack. The little yellow ball flew millimeters over the net landing just inside the line. Parker pumped her arm once pleased with the shot sending the crowd to their feet.


"What a rifle shot, Gene!" exclaimed the third commentator as Jill scrambled after the serve.


"Quiet please," said the judge as the crowd was on their feet again chanting "Kong." Less than forty minutes later Parker was doing her curtsey and holding up the women's singles trophy over her head. She walked the complete court so that everyone present could see the large silver plate in her hand. In an interview she had once said that the victories were as much the fans as they were hers, and Parker liked to share the moment with those that paid the price to come and see her. Her last stop was in front of Gary Bertrand her coach.


Gary had been at one time, a rising star in the tennis world until the day he collapsed on center court at the US Open with a blown knee. Instead of accepting defeat, he had turned to coaching finding a tall gangly kid that over the years he molded into a champion. The coach smiled like a proud father now as he watched the woman that she had turned into walk the circuit of the court showing off the spoils of her victory.


"Come on, Alicia, let's go congratulate the new champion down in the locker room," said Gary to the young woman next to him. The shapely redhead was an up and comer herself in music industry and was wild about Parker. She had been able to attend the prestigious tournament because her band's tour schedule put them in the area during the finals. It had been complete pandemonium a couple of nights before when the three of them had gone out to dinner and the two young women had been recognized. In a country that thrived on tabloid sensational stories it had been like a gift from the heavens.


"Excuse me, Mr. Bertrand, I have a message for you." The young man with the traditional Wimbledon colors on handed Gary a note, which made him frown the moment he started reading. He absolutely hated when Parker used him to blow off her date.


"Alicia, honey, why don't you head on back to the city and wait for Parker to call you. Something must have happened on one of those last serves and she is in with one of the trainers now." The look of concern on the pretty face made him feel like an ass, but there would be a heavy price to pay if he showed up with her in tow in the locker room.


"Is she going to be ok?" It had been Alicia's plan to walk out of the grounds on Parker's arm and hope there would be more photographers around. The publicity she and the band had racked up in their time in England had been priceless. The young singer had no regrets being seen on the arm of the tennis world's bad girl. Nor did she regret the stories that placed her in Parker's bed.


"She's going to be fine. This is just typical Parker believe me." If you only knew, honey, thought the coach as he looked at the young woman before him. If Parker was true to form it would be the last time he would see her unless it was by chance. Like in a restaurant where the typical scenario ended with Parker wearing a drink before the dessert cart came out. It still amazed him sometimes that women wanted to go out with the good-looking tennis star considering her track record, but they were all convinced that they were the one that was going to tame the bad ass Kong. Scratch another one off that list.


Gary entered the green room singing the line 'just another notch in my lipstick case' softly as Parker was finishing up her post game interviews. He shook his head in her direction making her laugh at his reaction to the favor she had asked of him in the note. She was going home and didn't want the complications that the increasingly demanding Alicia would pose. Gary congratulated her with a scowl on his face for using him as the heavy before cuffing her on the back of the head and sending her into the locker room to change.


He would cut her some slack like he always did considering there was no time to just kick back and not worry about the next tournament. It was the U.S. Open, and the only one that continued to elude the American player with more trophies than women she had slept with. Gary knew it wouldn't take much prodding on his part to get Parker to work hard for the title that would make her a true champion. The French, Australian and now the Wimbledon trophy were going home with them and he could almost taste the slam.


The men's final was still going on by the time they arrived at the airport. Parker was anxious to get home after being out of the country for over three months. The two police officers that had been assigned to them kept the crowds at bay as Gary and Parker sat waiting for their flight. The Bobbies stood far away enough to give the couple some privacy, but close enough to send a message to any overzealous fans. They would let in a few autograph seekers in at a time, most of them young teen girls thrilled to sit this close to their idol, before putting their arms out and closing ranks.


Parker took the time to ask them about their own tennis game and gave pointers to those that seemed serious about the sport. The tennis gear had been replaced by a lightweight linen suit over a tight white t-shirt. Without the jacket on, everyone close enough could see the muscle rippling through Parker's arms as she autographed everything from tennis balls to tournament programs. A groan went up through the crowd as boarding for the flight began and the player and coach picked up their stuff to leave.


As on most flights, the crew of Virgin flight 756 was waiting at the door to greet their passengers. The small blonde standing toward the front would have recognized their famous passenger the minute she turned the corner of the jet way even if she hadn't been carrying a large bag full of rackets. She had spent the morning watching the talented Parker King completely obliterate her opponent. Seeing her in person, everyone standing at the door agreed the player was even better looking in person.