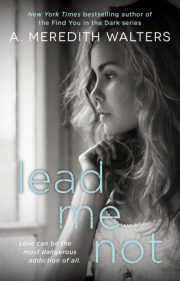 A. Walters - Lead Me Not краткое содержание

In this dangerously sexy novel from the New York Times bestselling author of Find You in the Dark, a straight-laced college student meets a handsome but enigmatic stranger who lures her into an underground club scene, where she finds it difficult to resist temptation
Aubrey Duncan understands loss. She knows what rock bottom looks like, and she is determined to crawl back up to the top after the sudden death of her younger sister. She blames herself for her part in the tragedy, convinced that she could have done something,anything, to help her.
In her effort to gain redemption, Aubrey starts fresh at Longwood University and facilitates an addiction support group, hoping she can support someone else in the way she failed her sister. But what she doesn’t count on is an all-consuming fascination with group member Maxx Demelo, a gorgeous, blond, blue-eyed enigma who hides dark secrets behind a carefully constructed mask. He only reveals what he wants others to see. But Aubrey glimpses another Maxx hidden below the surface—a Maxx who is drowning in his own personal hell.
As Aubrey and Maxx develop an attraction too intense to ignore, he pulls her into the dark underbelly of the city club scene, where she is torn by her desire to save him and an inexplicable urge to join him in his downward spiral. Worst of all, she is beginning to love everything she should run away from—a man who threatens to ignite in her a fire that could burn her alive…

Lead Me Not - читать книгу онлайн бесплатно, автор A. Walters

For everyone who is lost and hopes to be found . . .

just this once, I swore as I felt the needle kiss my skin. I grimaced as the sharp tip slid beneath the surface and connected with the waiting vein. The prick of pain bothered me. The sensation made me feel sick to my stomach.

Given how eager I was for the release, it was almost comical how squeamish I was when it came to the methods I had chosen to get my fix.

I don’t want this.

If only it were true. Too bad want and need were two entirely different things.

Sure, I didn’t want this. But my body sure as hell needed it. My veins burned as I unloaded the drug into my body. I picked at the skin around my nails, waiting for the high.

I had never gone to this extreme before. I had always kept myself perilously close to the edge without actually going over.

But this was different.

And the need to drown out the chaos in my head outweighed the inherent fear I felt of the needle that now hung limply between my fingers.

I was a goddamned mess. I sat there, squatting in the stall of the nastiest public toilet I had ever been in, when I could be out there, doing anything else but this.

What the fuck was wrong with me?

My phone buzzed in my pocket, but I didn’t bother to look at who was calling me. Because I already knew it would be her.

In a moment of stupidity I had called her. I had let my obsession with her rule me. Now she was worried.

I wish she would stop fucking worrying.

Christ, now I felt guilty. Because I should feel guilty for what I was doing to her.

I fisted my hand over my heart, ready for the pain that resided there to go away. I checked the time on my watch. Five minutes.

Any second and I would forget about all of this.

My phone buzzed again, and this time I pulled it out and stared at the screen. Aubrey’s name flashed bright in the dimness.

Before I was too blissed out on the high to care, I felt the fear.

A deep-in-my-bones sort of panic that not even the smack could erase. It all had to do with her.

And the consequences of my selfish choices on the two of us.

In my sudden clarity, I wished to God I could take it back—the moment when I had let the shameful taste of oblivion mean more than the peace I had found in her arms. I wanted to suck the poison from my veins and go back to those minutes before I had thrown my life away for a chance at drug-induced nirvana.

Because she was my nirvana. My quiet in the storm. And what I felt for her was a hell of lot more real than anything I could experience at the sharp end of a needle or through the chalky taste of pills in my throat.

But it was too late, and soon I wouldn’t care about any of it. And for the first time I hated it. I hated the high. I hated the relief. I hated me.

And then, finally, my limbs became heavy. My heartbeat began to slow. My mind, which was just a second ago debating whether to let her save me, clouded in a haze.

My phone buzzed again, and in a fit of anger, I threw it against the bathroom stall and watched with an encroaching indifference as the pieces fell to the floor.

My eyelids drooped, and my knees buckled. I slid down the wall to sit on the piss-stained floor as the air around me vibrated from the bass of the music playing in the club just beyond the door.

My mouth hung open, and all I felt was the euphoria. I fell to my side and pressed my cheek into the filth, pieces of my phone cutting my face.

And for now, that was enough.

“here are the dates and times for the addiction support group on campus. We coordinate with the local substance-abuse treatment center in facilitating the twelve-week program. The BS in psychology program here at LU requires fifty volunteer hours in a certified program to ensure your eligibility for graduation.” Dr. Lowell held out the list, and I took it with a smile.

Dr. Lowell smiled back. She was a small woman with short brown hair and serious eyes behind wire-rimmed glasses. She exuded a no-nonsense persona, which is why I gravitated toward her so easily in my early days at Longwood University. I had craved her rigid demeanor to counterbalance the tailspin in my head.

“Aubrey, I know this will be tough for you, but I think it’s extremely courageous and downright awe-inspiring the way you’re using your history to help others. The group will be lucky to have you.”

I blushed at the compliment and tucked the paper into my bag. Compliments had always made me uncomfortable because I knew, without a doubt, that I didn’t deserve them.

“Thanks, Dr. Lowell. I’ll have a look at the times and check my schedule. I’ll let you know what days I can sit in.” I got to my feet and slung my bag over my shoulder. Dr. Lowell came from around her desk and followed me to her office door.

“I’ve already let Kristie know you’ll be assisting with the group. I’ll e-mail you her contact details; that way you can communicate with her directly,” she said, holding the door open for me. “Now, this will be a lot more than you simply sitting in the group and listening while taking notes. You’re going to be an active facilitator. You’ll be working with Kristie in preparing for the sessions. She’ll want you to lead discussions. Do you think you’re up for it?”

It was an understandable question. Despite the fact that I currently had a 4.0 GPA and worked my butt off to maintain my scholarship at LU, Dr. Lowell was one of the few people on campus who was aware of my sordid and overly depressing history.

She was also the only person who didn’t allow me any excuses because of it. And for that, I appreciated her more than she could ever know. So her question didn’t piss me off the way it would have coming from someone else.

“I’m totally up for it, Dr. Lowell,” I said, injecting as much confidence as I could muster into my voice. Maybe if Dr. Lowell believed me, I could believe myself.

Dr. Lowell’s smile was a bit thin, and I was almost certain the tiny woman was a mind reader—that she somehow saw into my head and bore witness to my floundering confidence.

Because it was one thing to study the psychological effects of substance abuse. I could recite the textbooks inside and out. I could connect the dots from A to B. I could read the case studies and pretend that those people didn’t exist.

It was something else entirely to sit in a circle and hear their stories firsthand, to listen to strangers spill their guts as they shared how close they had come to losing it all. I knew that would make it all so very, very real.

And all that realness was a scary thing for a mind still reeling from a three-year-old trauma.

“Have a good evening, Aubrey,” Dr. Lowell said as I walked down the hallway of the psychology building. When I got outside and started my walk through the quad, it was already getting dark. The January air was cold, and I could smell snow.

My phone chirped in my back pocket, and I fished it out, finding a text from my roommate, Renee Alston. The vague words on the screen left an uncomfortable knot in the pit of my stomach.

Heading out. See you tomorrow.

I thought about texting her back, demanding details. Once upon a time Renee had been the ultimate fun girl. She had been the first to blast her music and get crazy drunk.

She used to be my complete opposite in every possible way. The wild girl with the heart of gold. The total extrovert who was the life of the party. Beautiful bombshell with guys falling at her feet. Taking full advantage of her long red hair and killer curves, she worked a room and enjoyed every moment.

But that was before Devon Keeton had entered the picture.

I squeezed the phone tightly in my fist and forced myself to put it back in my pocket. Responding to the text in any way would only further alienate the shadow girl who wore my best friend’s clothing.

At one time, our friendship had started to heal the snarly tangles of my wounded psyche. I had opened myself up to Renee in a way I never thought I’d be able to open up again.

So feeling like I was losing something I had come to depend on made me anxious and sometimes bitter.

And more than a little angry.

The campus was surprisingly busy for a Friday evening. Usually the place became a ghost town by four o’clock. The college was small, so most weekend entertainment happened away from the manicured lawns and perfectly pristine brick buildings.

I shoved my hands deeper into my pockets and hunched my shoulders, feeling the cold. I was making some outrageous and rowdy weekend plans in my head that included digging out the rest of my winter sweaters and categorizing them by textile and color. Watch out, world, Aubrey Duncan was getting her cleaning on!

I noticed a group of people standing in front of the brick wall that ran along the north edge of the campus. The students gathered there were pointing, and there was a definite excitement as they stared at something that had grabbed their attention.