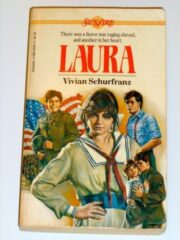 There was a fierce war raging abroad, and another in her heart.
While men are fighting overseas in World War I, lovely Laura Mitchell is caught up in the struggle for women’s rights in the Washington, D. C. of 1918. Dismayed by her willingness to go to jail for her beliefs, Laura’s mother and sister encourage her to pay more attention to her suitors. Laura only has eyes for her neighbor Joe Menotti, who treats her like a kid sister. But her brother’s friend, Shawn O’Brien, sweeps her off her feet with his Irish charm and dashing good looks. Yet everyone but Joe wants her to give up her ideals. Should she change herself, try to change the man she loves, or follow her conscience to the man who is waiting with open arms?

Laura Mitchell gazed out the classroom window at the snow-laden branches and the spirals of gray smoke that drifted upward from the brick chimney on a roof and into the bright blue sky. A few wet snowflakes gently descended on the iron fire escape. Laura’s thoughts strayed from Mr. Blair’s boring lecture on the Civil War to Joe Menotti. Darling Joe, the love of her life! To think he didn’t even know she was alive! How she yearned for him to see her as a mature young woman, instead of a freckled-faced youngster. After all, on March 10, 1918, she would be sixteen and next fall a senior at Jefferson High.

With a pang she wondered if the war would still be raging and if Joe would be sent overseas. She hoped that Joe, who was so good and kind, would be spared. She knew that his enrollment in medical school would help, but more and more young men were being sent overseas to fight the Germans. The war, which had been going on for four years, surely couldn’t last much longer.

Suddenly Joe’s handsome image danced across the frosty windowpane. In the lacy pattern she could trace his dark head and his finely chiseled profile with the strong chin and straight nose. Gradually her own face materialized. All at once his head moved down to touch her lips. As she visualized his sparkling dark eyes and slow grin, she smiled and a wave of love swept over her. Yes, she knew she was a woman, but now she had to convince Joe of that fact. At least she had Friday night at the movies to look forward to.

Every Friday night since she had been nine, and Joe thirteen, he had faithfully taken her to the movies. Well, one of these Friday nights he would see her in a new light. After all, she was beginning to notice that a transformation was taking place in her. Only last night she had stood before the mirror and examined her changing features. She was growing up! Her freckles were dwindling, and her big green eyes had taken on a deep, rich emerald glow, especially when contrasted with her deep brown hair surrounding her pure oval face. Her nose, though short, was well formed, and her cheeks had traded their roundness for hollow valleys. Her figure, too, she realized, was maturing. She smiled as she thought of how she had preened and pranced around the room, dressed only in her "teddy bear," her silky one-piece underwear.

Her mother, pillar of the war effort, would have thought her frivolous. Maude Mitchell was always involved in activities to help her community and society, so she would not have been amused at Laura’s preening. She would no doubt have laid down stronger guidelines for Laura to follow, so her excess energy would have a more proper outlet. It seemed to Laura that she, rather than her older sister, Sarah, received the brunt of new guidelines and ground rules in the Mitchell household.

Laura’s thoughts returned to her new look and the way it could help her gain Joe’s attention. She promised herself that at one of these Friday night movies he would see the new Laura Mitchell. She tucked an unruly curl back from her cheeks, pondering how she could accomplish this mission without appearing like a flirt. Quietly she tapped her pen against the inkwell. There must be some sort of solution to this problem.

"Y-yes?" she stammered, pulling her thoughts back to the chalky classroom.

"We’d like an answer," said Mr. Blair, her history instructor. He was a young man in his thirties who was always impeccably dressed from his spats to his high, stiff collar. With arched eyebrows he now waited, holding the map pointer against his left leg, much as a Prussian general might hold his swagger stick. His blond hair was oiled to perfection and combed back from his high forehead, accentuating the ice-blue eyes that now bored into hers. He looked like a mannequin as he stood rigidly poised, awaiting her answer.

"I-I’m sorry, but I didn’t hear the question." She felt the warmth creep into her cheeks. No matter what she had done this semester, she had never been able to please Mr. Blair.

"Of course you didn’t," he said softly. "You’ve been daydreaming again. I asked you to describe Pickett’s Charge for the Confederacy." His smile was smug, certain she wouldn’t be able to answer.

Just last night, however, Laura had read about the charge of the Southerners as they tried to break the Union line at Gettysburg. She vividly recalled every detail as she cleared her throat and began to recite, "Pickett’s force of about fifteen thousand men attacked the Union center. Heavy artillery was used on both sides, and Pickett’s cavalry crumpled but re-formed and pressed forward." She paused, enjoying Mr. Blair’s widening eyes. She could have sworn his blond mustache twitched, as she went on, "When the Confederate troops approached closer, the Northern sharpshooters opened fire, General Pickett was forced to retreat to Seminary Ridge." She ended her response with a sweet smile at her teacher.

Running his fingers up and down his watch chain, which dangled between two vest pockets, Mr. Blair observed her for a moment. Reluctantly he nodded and muttered, "Not bad for a girl."

Laura supposed she should have been pleased at his backhanded compliment, but she only flushed angrily. Why was he always surprised that a girl could grasp history as well as a boy? Seething, she watched as he turned and drew a map of the battlefield on the blackboard, showing the various positions of the generals.

"Gettysburg, Pennsylvania, is only about one hundred miles from Washington, D.C., but our city wasn’t threatened." His monotonous voice continued, and Laura was no longer interested in the Civil War. She wished he would discuss current news and what was happening along the western front. Thousands of Americans were pouring into France and filling the gaps in the Allied line. How many of General "Black Jack" Pershing’s troops, including her brother, Michael, were in France? If only this wretched war would end and Michael would come home again. She missed him. Her older sister, Sarah, had a double reason to wish the war were over, for besides Michael, her fiancé, Frank, was in northwestern France. Frank was a flyer with the Lafayette Escadrille. Poor Sarah. She didn’t talk much about Frank… the experts predicted that the average life of a pilot was only three weeks. Frank had been a flyer in France for three months, one of the lucky ones. But luck had a way of running out. He wrote to Sarah often, and she knew their letters were filled with wedding plans. As soon as he came back to Washington they would marry. Please, God, she prayed, let Frank come back safe and sound.

"Cassandra." Mr. Blair called out the name of Laura’s closest friend. "What was the result of Lee’s retreat at Gettysburg? Did General Meade pursue him?"

Laura glanced over at Cassie, whose large brown eyes stared at Mr. Blair. Cassie finally lowered her long lashes and studied her folded hands. It was obvious she didn’t know the answer.

Laura’s hand shot up in the air, waving it eagerly back and forth, trying to save her friend. But Mr. Blair wouldn’t be sidetracked. He studiously ignored Laura.

"Have you read the material, Cassandra ?" he asked with a resigned expression on his face. He glanced at Olaf Jorgensen, his prize history student, and a brief smile flickered between them.

Cassie looked up, her elegant long neck accentuating her short, wavy hair. Her delicate face was impassive as she said quietly, "No, sir, I didn’t have time for my school-work last night."

"You didn’t have time!" he mused. "How very odd. Perhaps we should take class time to read our assignments." His lopsided smile mocked his unsmiling eyes.

Cassandra said nothing, but her cheeks reddened. Mr. Blair continued, "Did you have more pressing matters to attend to rather than your history?"

"Yes, sir, I did," she said, as her lovely chin rose a notch and she looked straight into Mr. Blair’s eyes.

Mr. Blair was obviously enjoying this confrontation, knowing he had the upper hand. Laura was astonished at Cassie’s bold reply. What was she thinking of? It was bad enough that she, Laura, and Mr. Blair were always sparring, but if Cassandra got on his bad side, too, there would be constant battles.

Mr. Blair tapped the pointer against his leg. "What may I ask was this other urgent matter?"

"Very well," Mr. Blair snapped. "Come in before school in the morning for additional work." He dismissed Cassandra Adams as if she were a bothersome gnat. "I see it’s almost time for the bell." He paged through his textbook. "For tomorrow, read pages 201 to 230 and answer the questions at the end of the chapter." He glanced around the room and spotted Laura, who was not writing. "Jot the assignment down, Laura," he admonished sternly.

When the bell shrilled, she gathered her books and hurried to Cassandra, who was already halfway down the hall. Breathless, she came alongside her friend. "What made you say that, Cassie? Mr. Blair will loathe you forever."