Главная / Исторические любовные романы / Julia and the Master of Morancourt 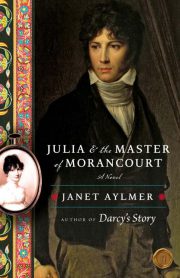 Janet Aylmer - Julia and the Master of Morancourt краткое содержание

Twenty-year-old Julia Maitland is ready to find a husband. Lord Dominic Brandon has proposed, delighting Julia’s socially ambitious mother, despite Brandon’s unsavory reputation and rumored ties to smuggling. Though her father favors Jack Douglas-who lacks a title but will inherit his father’s fortune-Julia has eyes only for Kit, Jack’s younger brother, who will inherit very little. When Julia accompanies her Aunt Lucy to the estate of Lucy’s recently deceased childhood friend, she is stunned to see Kit, who inherited the estate and new surname from his godmother, making him the Master of Morancourt. The attraction between the pair blossoms but Julia knows a loveless union still awaits unless she can convince her family otherwise. Aylmer is more enamored of the period than of her characters, and the plot serves as merely a framework for sumptuous descriptions of Regency-era events and fashions. Despite a treasure trove of Austen-era trivia, a stronger narrative would have made the love affair more compelling.

Julia and the Master of Morancourt

This book is for

who know why Dorset is so special

The noise of the wheels of the old carriage rumbling along the uneven track almost drowned out the sound of the shoes tapping on the floor.

Almost, but not quite.

“Julia, why do you keep tapping your shoes?”

There was no answer. Her sister was intent on looking out of the window, at the rather grey day, at the bare green fields and the low stone walls that divided them into a green patchwork quilt. Beside her, on the worn leather seat, was the old tapestry bag containing their riding boots, waiting ready for the treat to come.

“Julia,” persisted Sophie, “why are you tapping your shoes?”

Their father stirred from dozing on the seat opposite them and opened his eyes. “What did you say, Sophie?”

“Why is Julia tapping her feet, Papa?”

Lewis Maitland looked down at the worn old red shoes.

She had insisted on wearing them. Perhaps they were familiar, comforting, in a situation he knew that Julia would have preferred to avoid. Her face seemed paler than usual, and she had drawn her hair back from her face this morning in a rather severe style, the golden-brown curls more disciplined than usual above her brown riding skirt and short yellow jacket.

But his eldest daughter had heard his voice and, ignoring her sister, turned her head to look at him. He returned her quiet smile before Julia said, “If you keep being a nuisance, Sophie, Mr. Douglas may not allow you to ride any of his horses.”

Her sister did not look in the least abashed at this remark, but decided that it might not be a good idea to ask the question again.

“Papa, are you warm enough?”

Julia leant across to tuck the rug around him more snugly. His greatcoat had several capes, but it worried her that he was feeling the cold so much nowadays, and he always refused to wear any gloves on his thin hands.

Her father reflected, not for the first time, how very different the two sisters were. His eldest daughter had inherited her mother’s grey eyes, and her determination, certainly, but in most other respects—her calmer personality, her sympathy for other people, her love of books, and her practical and independent mind—she was quite unlike Olivia.

Sophie, on the other hand, was quite irrepressible, ran at everything in life at full tilt, and could be very thoughtless about the needs of others. Harriet, the youngest, was a mixture of the two. But she was almost sixteen now, and it might be that she had changed during her last few months away at school.

Sophie fidgeted on her seat, and Julia said, “I suppose that what you really want to know is how long it will be before we get there?”

“Well, why shouldn’t I? We seem to have been sitting on these uncomfortable seats for ages. Papa, you promised me that the journey would take no more than thirty minutes!”

“It is only twenty minutes since we left home, Sophie.”

She looked rebellious, and twisted her hair in her fingers beneath her chip straw hat.

Their father, anxious to preserve a precarious peace, changed the subject.

“Harry Douglas has several good horses, and he has been very kind in saying that you may ride one, Sophie. Aren’t you looking forward to that?”

“Oh, yes, of course I am, Papa. But I don’t like sitting in the carriage for so long, and it keeps making that really horrible squeaking noise. I hate it!”

Her father turned the conversation back to the ride that she and Julia had been promised later in the afternoon.

“You will see that the stables were built at the same time as the mansion, but the farm buildings are a more recent addition. I believe that they have been constructed by Harry Douglas since his wife died, when young Jack decided that he was more interested in farming, like his grandfather, than in any other occupation.”

Sophie was not interested in buildings—what she wanted was to go out straight away on one of the horses housed in the stables. “Does he ride often?”

“No, his son Jack—he is the person Julia is really going to see, isn’t he?”

Her father looked at Julia, but her head was turned away from him, so he looked back again at Sophie.

He did not answer her directly. “Most people who live on a large estate would need to ride some of the time, but I don’t imagine that Harry Douglas will want to go out today, so I will probably stay in the house with him whilst you and Julia ride with Jack, and maybe his brother.”

“Yes, there is a younger brother, just back from the war with Napoléon.”

Julia was getting bored with her younger sister’s conversation. She did not know anything about Kit, but she had already heard that Jack Douglas was very careless of his horses, and a daredevil rider. That was one of the matters that she had decided to put out of her mind when her father had pressed her to agree to the visit. At least Jack should get on well with Sophie, for she was fearless in the saddle, as impetuous as she was in her conversation.

Julia turned to look again out of the carriage window. Most of Derbyshire was a mixture of valleys and steep hills, but this locality seemed to be an endless fl at panorama of fields and walls. However, it was at last giving way to gently rounded slopes and groups of trees close to the road. Perhaps they had not got too much further to go now, and certainly Sophie would probably lose her temper if she had to sit still very much longer.

Soon after, the noise of the wheels on the track began to change from a loud rumble to a more gentle and even sound. As they rounded a bend, tall brownish stone pillars came into view with a lodge in the same local stone on each side, the two houses being linked by an archway over a handsome pair of iron gates. The carriage slowed, then paused, and a man came forward from one of the lodges to let them through.

Julia soon realised that her father was right, as it took fully another ten minutes for them to reach the house. She could see that Sophie was very impressed by the size of the park, for their father had said little about the Norton Place estate beyond hinting that the family was financially very secure.

Here, the gravelled drive was bordered on each side by low well-kept wooden fences to keep the sheep and deer from straying onto the track.

The only trees visible were in the further distance, on the lower slopes of the hills that formed a natural bowl surrounding the mansion. To one side, a stream widened into a lake close to the house, and then tumbled down a waterfall and away along the valley. On the other, the extensive block of stables built at right angles to the main building enclosed a courtyard where the carriage was brought to a halt at the foot of a long flight of stone steps.

Julia had not expected to be pleased by the appearance of the mansion, but found herself liking the gracious symmetry of the main facade and the tall windows, and the simple but elegant formal garden on each side.

“Welcome, welcome, Lewis!” The booming voice came from a stout red-faced gentleman standing between the stone pillars at the top of the wide stone steps by the main doors. He came down the steps to greet them.

“Thank you, Harry. May I introduce my daughters, Julia Maitland—and not forgetting Sophie?” Both the young ladies curtsied to their host.

“Indeed, you are both very welcome. I wish that we had such fine young ladies living in this house.”

Julia found his rather effusive style of speaking rather disconcerting, but Sophie was delighted. After all, she was eighteen years old now, but was always chafing at her more junior status in the family. Only the fact that Harriet was two years younger made her feel like the grown-up young lady she felt she had now become.

“Do you want the bag with you, Miss?”

They both turned, and the groom gestured towards the tapestry bag still resting on the seat of the carriage. Before Julia could reply, Sophie pushed forward and took it. Clutching the handle, Sophie started to walk up the steps.

“Sophie!” She stopped as Julia checked her. “Wait for Mr. Douglas to conduct us.”

Their host laughed. “I like to see a young lady with spirit.” And to the coachman he said, “Please take the carriage round to the stables.”

Then Mr. Douglas took their father’s arm and they walked up the steps with the two sisters following behind.

As she passed through the front door, the butler took the tapestry bag from Sophie and put it on a chair with a velvet seat. She was about to protest but thought better of it when she saw Julia’s expression.

Sensing her urgency, Mr. Douglas said, “I don’t know where Jack is, but he can’t be far away. Reuben, go and tell him that Miss Maitland and Miss Sophie have arrived. He’s probably somewhere in the farm buildings.”

The groom hurried away, and their father followed Harry Douglas through the doorway.

Inside, a handsome wooden staircase with a graceful balustrade curved away towards the rear of the hall and then split into two parts to reach the first floor. Beyond stone pillars on each side, panelled doors could be seen leading to several spacious reception rooms, and straight ahead the park outside was visible through several tall windows. Large paintings hung on the walls above more velvet chairs, and a large Turkish carpet occupied the centre of the floor. Mama would be impressed by all this, Julia thought.