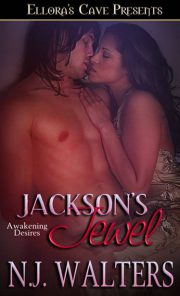 The last thing Jackson Connors wants is a housekeeper. He likes his life just as it is-solitary and uncomplicated. Emerald Jewel is a New York designer with a stalker on her trail. She needs a place to hide out and Jackson’s farm is the perfect solution to her problem. The last thing she wants is to be attracted to her sexy new boss. Neither of them is prepared for the explosion of passion that flares between them. They try to resist, but the desire will not be denied. Jackson knows Emerald’s life is in New York and his is on the farm. He’ll eventually have to let her go, but he’s not about to let her face this threat on her own. But the stalker is getting closer to finding Emerald and will stop at nothing to possess her. As the threat around her escalates, she must face leaving Jackson to draw the danger away from the man she’s coming to love.

Emerald Jewel glanced nervously in her rearview mirror, her hands tightening around the steering wheel as a black pickup pulled out to pass her. He can’t find you here. She repeated the mantra over and over but it did no good. She didn’t believe it. The truck pulled alongside her and she risked a look. The young man driving the other vehicle gave her a wink and a nod before pulling ahead of her.

Her heart pounding, her breathing shallow, Emerald eased her foot off the gas and pulled her car onto the shoulder of the road. When she’d come to a complete stop, she leaned her head against the steering wheel and took a deep breath. Slowly her breathing returned to normal and her heartbeat calmed. Her hands were trembling as she peeled them away from the wheel. Sweat rolled down her back, making her shiver even though it was a hot summer day.

She dragged a nervous hand across her forehead. Her life had gone from wonderful to terrifying in the past two months and she still couldn’t quite figure out how it had happened. When the first flower, a beautiful white orchid, had arrived at the offices of Sisters’ Jewels, the company she owned with her two sisters, she’d been charmed. There had been no card to indicate who had sent it and her sisters, Topaz and Sapphire, had teased her endlessly about her secret admirer.

Emerald had been flattered at first and had placed the orchid on the corner of her desk, enjoying its fragrance and beauty as she worked on her designs. Sisters’ Jewels sold accessories, scarves, journals, stationery, cards and jewelry out of their small New York boutique. Her older sister, Topaz, was the brains behind the business operations while her younger sister, Sapphire, was the creative force behind their unique jewelry creations. Emerald used her artistic background to create designs for cards, stationery, covers for journals and gift bags, and she’d recently branched out into designing fabric for the new scarves and purse line they wanted to carry.

Opening her eyes, she leaned her head back against the seat and sighed. She’d racked her brains trying to figure out who could be sending her these things, but she’d drawn a blank. Who knew how many men she came in contact within the run of a day? There was the grocery store, the coffee shop, the subway… The list went on and on.

There was no way she could imagine her ex-boyfriend, Beau Vater, sending them. After all, she’d broken it off with him six months ago when she’d caught him cheating on her. Yes, he’d made a few overtures about getting back together, but she’d been adamant in her refusal. She hadn’t dated since they’d split, so there were no new boyfriends to worry about.

Now that her nerves were calm, she put the car in gear and eased back onto the pavement. Ignoring the scenery around her, she continued to think as she drove. The only other men in her life on a regular basis were Fred Kirby, who delivered the mail to Sisters’ Jewels every day, and Derek Locke, longtime friend and son of their parents’ former manager.

“It can’t be either one of them.” Her voice sounded desperate even to herself. She licked her dry lips, no longer believing her own words.

The letters had been the next thing to arrive. Computer-generated and printed on plain white paper, they contained graphic suggestions about what the sender wanted to do to her. She swallowed hard, glad she hadn’t eaten yet today or she might have lost whatever food had been in her belly. As it was, her stomach churned. The possessiveness in the tone had been frightening and she’d finally given in to her sisters’ pleas and gone to the police.

She’d come away from that experience feeling more alone than ever. Although they were sympathetic, there wasn’t much they could do. They took the letters and dusted them for prints. There were none. The postmark was local, but there was no way to trace it to whoever sent it. The paper and envelopes could be bought just about anywhere. Unless she could give them some ideas, the most they could suggest was being careful about going anywhere alone.

The police had suggested that it could be a crazed fan of their parents. Moon and Aloysius Jewel had been well-known folk singers in the late Sixties and early Seventies. They toured worldwide and had been very successful. The onset of disco and her mother’s first pregnancy had led them to retire.

Her father might have been a hippie, but he’d also found he had a talent for business. He’d parlayed their money into quite a bit more and now her parents lived in upstate New York on a large, private estate. That is, when they weren’t traveling around the world. The births of all three of the girls had been a huge media event, but over the years, they’d been mostly forgotten about, except by diehard fans. Emerald supposed it could be a fan of her parents, but she really didn’t think so.

They were in Europe at the moment and knew nothing about the stalker. Both Topaz and Sapphire had wanted to tell their parents, but Emerald didn’t want to worry them. If her father knew, he’d have them all locked behind the gates of the family estate with a battalion of security guards positioned around the perimeter. At the moment, that didn’t sound like such a bad idea.

The ribbon of road in front of her blurred and she blinked. All of a sudden, she realized that the interior of the car was extremely hot. Flicking the air-conditioning up higher, she let the cool air wash over her heated flesh. She shivered, but at least the blast of air made her more alert.

The final straw had come over the past two weeks. Someone had hacked into her e-mail account and started writing nasty letters to all her friends and business contacts. By the time she’d discovered what was going on and had taken steps to stop it, Sisters’ Jewels had almost lost a very lucrative deal with a large, upscale clothing chain who wanted to carry a line of their products. Emerald had spent days on the phone contacting everyone she knew and explaining that she’d been the victim of a hacker. At first, she’d believed it was just a random attack, but she’d gotten another note from her stalker. He didn’t like her working. According to his letter, she should be singing like her parents had, not slaving in a tacky little shop.

Crazed fan suddenly went to the top of her list of possibilities.

At least that had ruled out Derek. She loved him like a brother, but he barely managed to keep his e-mail and appointments straight. The man was a genius at promotion and wheeling and dealing, but his computer skills were just average. In typical Derek fashion, he’d learned what he needed to get by—no more, no less.

When she’d started receiving packages at the apartment she shared with her two sisters, Emerald had moved beyond fear and into terror. This person knew where she lived, had likely been watching her. The final package had arrived just yesterday morning. Large and flat, it had seemed harmless enough, but they weren’t taking any chances. They’d called the police.

Her phone rang. Emerald jumped, her heart starting to pound again. “Get a grip,” she admonished herself as she pulled over onto the shoulder of the road and fished her phone out of her handbag. She’d told her sisters she’d keep in touch, but she hadn’t talked to them since breakfast this morning and it was now after two in the afternoon.

They had protested her leaving and going off by herself, but she’d been adamant. She hoped by leaving that she’d draw the threat away from her sisters. A spark of hope flickered inside her. Maybe they’d heard something from the private investigator they’d hired. “Hello.”

“Wasn’t my last present to your liking?” The voice was distorted but distinctly male. Emerald froze.

“Who is this?” Her voice was little more than a whisper.

He laughed and the sound sent chills racing over her flesh. “You belong to me, Emerald. Once you admit that, then things will get easier for everyone.”

She closed her eyes and swallowed heavily. She was dealing with a lunatic. The last package had contained a long, white wedding gown as well as a pair of heavy black handcuffs. This guy was sick! “I don’t belong to anyone, you jerk.”

“Temper, temper.” He chuckled. “I know you think you can run.” He paused for a moment. “I hope you enjoyed your overnight stay in Jaffrey.”

Emerald’s hand flew to her throat. She’d stayed at an inn in that town last night and gassed up her car there this morning. She’d purposely been taking a winding path on this trip so no one would be able to find her. “How could you know?” She hadn’t meant to whisper the words aloud, but he heard them.

“I know everything about you, my black-haired beauty.” The good humor fled his voice and it became as hard as ice. “You belong to me.”

The line went dead and she sat there shaking for the longest time. The occasional car passed her and when one of them started to slow down, she flung her phone in her purse, put her foot on the gas and spun back onto the road.