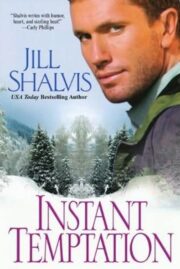 T.J. Wilder is the perfect package of breathtaking adventure and raw sex appeal. Even better, he’s about to reconnect with the one woman he’s never been able to forget…
Get Your Pulse Racing
To Harley, the landscape around Wishful, California, is exhilarating, untamed, and more than a little dangerous. The same could be said for T.J. Wilder, who’s invited himself along on her trek to study a rare coyote. Harley’s career is riding on this trip, and she doesn’t need a stubborn, incredibly sexy distraction. But T.J. is a professional guide who knows when to stay back and when to provide invaluable expertise-just like he’s done since they were in high school. And Harley, as usual, is torn between throttling him and giving in to the raw attraction that’s been smoldering all these years.
T.J. knows how proud and capable Harley is, but he’s damned sure not letting her put herself at risk when there are illegal hunters in the area. She needs him, with the same soul-stirring urgency that he’s always craved her. And here, in this beautiful place days from civilization, he’ll finally have a chance to prove it-over and over again…

Though TJ had matured and found success, he still gave off a don’t-mess-with-me vibe. Even now, at four in the afternoon, he looked big and bad and tousled enough that he might have just gotten out of bed and wouldn’t be averse to going back.

It irritated her. It confused her. And it turned her on, a fact that drove her bat-shit crazy because she was no longer interested in TJ Wilder.

It’d be suicide to still be interested. No one could sustain a crush for fifteen years.

Except, apparently, her. Because deep down, the unsettling truth was that if he so much as directed one of his sleepy, sexy looks her way, her clothes would fall right off.

Wasn’t that just her problem. The fact that once upon a time, a very long time ago, at the tail end of TJ’s out-of-control youth, the two of them had spent a single night together being just about as intimate as a man and a woman could get. Her first time, but definitely not his first. Neither of them had been exactly legal, and only she’d been sober.

Which meant only she remembered.

Not going there…never going there again. “Thanks for the maps,” she said in a clear invite to leave.

Instead he reached for her spoon and stole a bite of her ice cream.

“I wanted to talk to you.” He licked the spoon with his tongue, flashing straight white teeth, and she remembered what else he liked to do with that mouth.

She dragged her eyes off it and up to his eyes. “About?” she asked suspiciously.

“I don’t go out to dinner with the big bad wolf.”

He grinned. “Sometimes, Harley, you have to take a risk.”

She wasn’t real big on risk. Risk tended to end badly for her. Such as staring at her insufficient bank balance. Such as holding two jobs, neither of which was satisfying her. Such as waiting on Nolan to make his move sexually, when she was so overcharged she’d probably explode during her next shower.

Or the next time she leaned against the washer during the spin cycle.

Unable to explain any of that, she turned and started to walk into her kitchen. TJ hooked a finger into the back of her coveralls and halted her progress.

“In a minute. You’re off to Desolation Wilderness for a few days.”

Her back was plastered to his chest, and it was a damn fine chest. Strong. Broad and warm. “I have to check on the tracking equipment. Several cameras aren’t transmitting. Also I’m hoping to catch sight of any of the three core coyote groups that we’re tracking. I’ve got a red, a blue, and a green group scattered through Desolation.”

“Hope to catch sight of them?”

“Well, honestly, they’re so slippery, even with the GPS system in place I’ll settle for signs. DNA.”

She heard his smile. “You mean you’re going looking for coyote shit.”

She sighed. “Why do guys think anything to do with bodily functions is amusing?”

She rolled her eyes so hard they almost fell out of her head.

“Desolation, Harley? At this time of year?”

His mouth was disconcertingly close to her ear, and his voice, low and husky, had a terrible habit of bringing her deprived body to life. “I have to impress,” she said. “I want that research job in Colorado. And besides, it’s September. It’s the best time of year to go. Only a very small chance of a snowstorm, and not quite hot enough to fry an egg on a rock.”

He said nothing to that, and not being good at loaded silences, she squirmed free. “I don’t know what the big deal is. You take treks like this all the time. You just got back from two months in Alaska.”

Right. She was just a mechanic and a part-time research biologist, used to being either under a car or behind a computer. She got that.

When the cameras were functioning, that is. Which meant field trip. She’d be hiking into the northwestern slope of Desolation, a hundred-square-mile federal wilderness area west of Lake Tahoe. True, it was some of the toughest, most rugged, isolated land in the country. Most of it was roadless, trail-less, and devoid of logging and grazing.

But she’d be getting out from behind her laptop.

“I get why you’ve been asked to do this,” TJ said. “You’re a cheap resource.”

“You’re also sharp, intuitive, and probably the best intern they’ve ever had.”

While she processed that, both the compliments and the warm fuzzies it sent skittering through her, he went on. “The question is why do you want to do this? Why not just skip the internship and apply directly for the job you want?”

“Because there’s only going to be one opening, and only one of us interns is getting it.”

“What about somewhere else then?”

“There is nowhere else hiring wildlife biologist researchers.”

“And you’re tired of wrenching.”

And tired of being alone. And lonely. Her best friend Selena had met the love of her life, sold her pastry shop, and moved to New York. Her sister was busy most of the time, or preoccupied in a way only a twenty-one-year-old could be. And Nolan…well, if he moved any slower he’d be going backwards. “Beyond tired.”

“Is it Nolan? Is he pressuring you in some way, or-”

“No.” She wished. “Nothing like that. I just…I just need to make this change. Working at the garage was a necessity, never what I wanted to do. I need more.”

She knew he’d understand that. He’d come from nothing himself, and he’d worked his ass off to get his “more.”

Now she was doing the same.

“We’re trying to hire another hand at Wilder,” he said, watching her in that quiet, pensive way he had. “We’d hire you in a hot minute.”

“Thanks, but I want this job.”

A long inhale was his only answer, but it was enough to remind her of his past and a certain tragedy that he’d faced that might be making her pending trip difficult for him to accept. “I’m going to be fine out there,” she said softly. “Nothing’s going to happen to me.”

A tightening of his jaw was his only reaction. “I know that, too.” He was quiet a minute, then shook his head. “You’re right, you’ll do great.”

That brought her some unexpected surprise. Her dad had run a small holistic vitamin store before he’d lost it in the current craptastic economy. Her mom was an artist and a chef who preferred to float from one job to the next. Skye worked the cash register at the Wishful grocery store while sometimes attending classes at a junior college when it suited her or if she had a “hot” professor. Collectively, the Stephens family didn’t tend toward ambitiousness, and as a result, none of them understood Harley’s yearning for more.

So it was ironic as hell that the single most frustrating, annoying, maddening person she knew would actually be the only one in her life supporting her. She wanted to thank him for that, but more than anything, she wanted him to leave before she asked him to take off his clothes and then hers.

Clueless, he sat down at her kitchen table and carefully shifted aside her camera to gesture to the maps. “Show me your plan.”

TJ was the brains behind all the creating, organizing, planning, and plotting of the trips at Wilder. He was good at it-in large part thanks to his ability to be incredibly intuitive and doggedly aggressive, not to mention he was a master planner and a survival expert.

He wouldn’t approve of her plan to wing it.

He eyed the ice cream still in her hands and raised one brow. How busy can you be, came his silent question.

Dammit. “Maybe I have a date.”

When she sighed, he simply crooked a finger at her in the universal come-here gesture.

And just like that, her feet overtook her brain and took her straight to him.

TJ kept his eyes on Harley’s maps and notes as she moved reluctantly closer. She was dressed from a shift at the garage, but the cute dirt streak across her forehead and baggy coveralls didn’t impair his imagination any.

She was still hot.

“I didn’t realize you were going in by yourself,” he said.

“Does it involve a sharp blow to your head?”

She sighed. “It’s not that dangerous, TJ.”

“Harley, any lone trip into any part of the Sierras is dangerous. Most especially Desolation Wilderness. Where are you going in?”

She didn’t sit, he noted, but instead remained at his side. “West entrance.”

In terms of sheer acreage, Desolation wasn’t all that large, but it was isolated, remote, and contained over a hundred glacier lakes, making it a haven for wildlife. No hunting was allowed, and even hiking in there required a permit. The west entrance was the closest access but not the easiest, which didn’t matter because once she was in, there was little that was easy about the hike she’d be making. “What else are you doing in there besides checking on the surveillance cameras?”