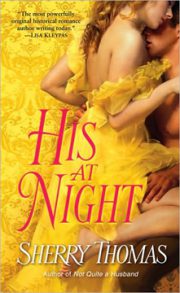 Love is hottest in the darkness before dawn.
Elissande Edgerton is a desperate woman, a virtual prisoner in the home of her tyrannical uncle. Only through marriage can she claim the freedom she craves. But how to catch the perfect man?
Lord Vere is used to baiting irresistible traps. As a secret agent for the government, he’s tracked down some of the most devious criminals in London, all the while maintaining his cover as one of Society’s most harmless — and idiotic — bachelors. But nothing can prepare him for the scandal of being ensnared by Elissande.
Forced into a marriage of convenience, Elissande and Vere are each about to discover that they’re not the only one with a hidden agenda. With seduction their only weapon — and a dark secret from the past endangering both their lives — can they learn to trust each other even as they surrender to a passion that won’t be denied?

To my dear friend Janine Ballard,

who is my story guide, my common sense,

and the wind beneath my wings.

one of the luckiest days of my life.

The Marquess of Vere was a man of few words.

This fact, however, would astonish all but a select few of his numerous friends and acquaintances. The general consensus was that Lord Vere talked. And talked. And talked. There was no subject under the sun, however remote or abstruse, upon which he did not eagerly venture an opinion or ten. Indeed, there were times when one could not stop him from pontificating on that newly discovered class of chemical substance known as the Pre-Raphaelites, or the curious culinary habits of the Pygmy tribes of central Sweden.

Lord Vere was also a man who held his secrets close.

But anyone so deluded as to voice such a pronouncement would find himself surrounded by ladies and gentlemen on the floor, screaming in laughter. For Lord Vere, according to public opinion, could not distinguish a secret from a hedgehog. Not only was he garrulous, he volunteered the most intimate, most inappropriate personal knowledge at the drop of a hat—or even without a stitch of haberdashery anywhere in sight.

He gladly related his difficulties with the courting of young ladies: He was rejected early and rejected often, despite his stature as a peer of the realm. He gave up without hesitation the state of his finances—though it had been discovered that he was quite without a notion as to how much funds were at his disposal, current and future, thereby rendering his conjectures largely moot. He even ventured—not in mixed company, of course—to comment on the size and girth of his masculine endowment: enviable on both counts, the measurements verified by the experiences of the merry widows who looked to him for an occasional tumble in the sheets.

Lord Vere was, in other words, an idiot. Not a raving one, for his sanity was rarely questioned. And not so moronic that he could not see to his daily needs. Rather, he was an amusing idiot, as ignorant and puffed up as a pillow, silly to the extreme, but sweet, harmless, and very well liked among the Upper Ten Thousand for the diversion he provided—and for his inability to remember anything told him that did not affect his meals, his nightly beauty rest, or the pride and joy that resided in his underlinens.

He could not shoot straight; his bullets never met a grouse except by accident. He rarely failed to turn knobs and levers in the wrong direction. And as his gift for wandering into the wrong place at the wrong time was legendary, hardly anyone batted an eyelash to learn that he was an eyewitness to a crime—without having any idea what he’d seen, most assuredly.

Such an extraordinary idiot had he been in the thirteen years since his unfortunate riding accident that no one not privy to his more clandestine activities had ever remarked on his proximity to some of the most sensational criminal cases of the upper crust, shortly before those cases were solved and the culprits brought to justice.

It was an interesting life, to say the least. Sometimes the tiny handful of other agents of the Crown who knew his true role wondered how he felt about playing the idiot for most of his waking hours. They never found out, for he was a man of few words and held his secrets close.

Of course, no secret remains a secret forever….the beginning of the end of Lord Vere’s secret came, quite literally, in an ambush by a young lady of questionable ancestry and equally questionable methods.

A young woman who, in a strange twist of fate, would soon become the Marchioness of Vere, his lady wife.

The rats were Vere’s idea. His idea of a joke, to be more precise.

London was emptying at the tail end of the Season. Vere had seen his brother off at the train station earlier in the day; tomorrow he himself was headed for Gloucestershire. There was no time like the beginning of August to appear innocently at a country house to which he might not have been invited—and claim that he had: After all, what was one more guest when there were already thirty of them running about?

But tonight’s meeting was about Edmund Douglas, the reclusive diamond mine owner suspected of extorting from the diamond dealers of London and Antwerp.

“We need a better way to get into his house,” said Lord Holbrook, Vere’s liaison.

Holbrook was a few years older than Vere. When Oscar Wilde had been the country’s leading literary celebrity, Holbrook had worn his dark hair long and cultivated an air of intellectual ennui. Now that Wilde had gone off to a disgraced exile, Holbrook’s languor was accompanied by shorter hair and a more straightforward display of nihilism.

Vere helped himself to a piece of Savoy cake. The cake was airy and spongy, and just sturdy enough for a spoonful of apricot jam. Holbrook had a way of keeping his hidey-holes—a smattering of properties across metropolitan London—well supplied, so that whenever his agents had to make use of one, there was always good liquor and the makings of a proper tea.

Across the gaudy drawing room—this particular house behind Fitzroy Square had once housed a succession of kept women—Lady Kingsley dabbed a napkin at the corner of her lips. She was a fine-looking brunette about the same age as Holbrook, the daughter of a baronet, and the widow of a knight.

As covert agents, women had the advantage. Vere and Holbrook must assume personas not their own in order not to be taken seriously—an absolute necessity when one went about inquiring after sensitive matters on behalf of the Crown. But a woman, even one as sharp and capable as Lady Kingsley, often managed to be dismissed on nothing more than the fact of her sex.

“I told you already, Holbrook,” she said. “We must make use of Douglas’s niece.”

Holbrook, sprawled on a red velvet chaise trimmed in gold fringe, filliped the most recent case report lying on his chest. “I thought the niece hadn’t left the house in years.”

“Precisely. Imagine you are a girl of twenty-four years, well past the age when a young lady ought to be married, and isolated from all the gaiety and amusement of proper society. What is the one thing that would tempt you the most?”

Vere smiled and said nothing.

“No.” Lady Kingsley rolled her eyes. “You would wish to meet eligible young men, as many of them as can squeeze under one roof.”

“Where do you plan to collect a houseful of desirable bachelors, madam?” asked Holbrook.

Lady Kingsley waved her hand in dismissal. “That is the easy part, the mustering of manly lures. The problem is that I cannot simply drive up to Highgate Court and present the gentlemen—it’s been three months since I leased the next-nearest house and I still haven’t met her.”

“May I?” Vere pointed at the report on Holbrook’s chest. Holbrook tossed the report his way. Vere caught it and skimmed the pages.

Edmund Douglas’s estate, in which he’d maintained residence since 1877, was a manor constructed to his specification. There were hundreds of such new country houses all over the land, built by those with a fortune to spare, thanks to the prosperity of the Age of Steam.

A fairly common sort of estate, yet one that had proved difficult to penetrate. Plain burglary had not succeeded. An attempt to infiltrate the staff had also failed. And due to Mrs. Douglas’s ill health, the family rarely mingled with local society, rendering useless the more socially acceptable routes into the manse.

“Have a domestic disaster on your part,” said Vere to Lady Kingsley. “Then you will have an excuse to approach her.”

“I know. But I’m hesitant to damage the roof—or the plumbing—of a leased house.”

“Can’t your servants come down with something disgusting but not infectious?” Holbrook inquired. “A case of communal runs?”

“Behave yourself, Holbrook. I am no chemist and I will not poison my own staff.”

“How about an infestation of rats?” Vere suggested, more to amuse himself than anything else.

Lady Kingsley shuddered. “What do you mean, an infestation of rats?”

Vere shrugged. “Put a dozen or two rats to run about the house. Your guests will scream to evacuate. And the rats won’t do permanent damage to the house, provided you have a rat catcher set to work soon enough.”

Holbrook sat up straight. “Splendid idea, my dear fellow. I happen to know a man who breeds mice and rats to supply scientific laboratories.”

That did not surprise Vere. Holbrook had at his fingertips a large assortment of bizarre and bizarrely useful contacts.

“Au contraire, I think it is pure genius,” declared Holbrook. “Douglas travels to London to meet with his solicitor in two weeks, am I correct?”

“That should be enough time.” Holbrook reclined back onto his red velvet chaise. “Consider it done.”

Holbrook tapped a finger against his lips. “Funny you should mention Queen and country, my lord: I have just received word of the blackmailing of a certain royal and—”

Vere, however, had already shown himself out.