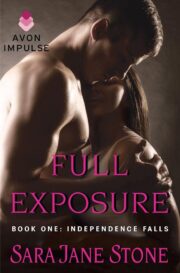 No touching allowed . . .
After serving her country, Georgia Trulane craves adventure—and sex. She’s set her sights on her brother’s best friend—now her boss, since she took a temporary job as his nephew’s live-in nanny. Only problem? Eric refuses to touch her. That doesn’t stop Georgia from seducing him. But an earth-shattering encounter leaves her fully exposed, body and soul.
Eric has a long list of reasons to steer clear of the woman he has wanted for as long as he can remember. For one, he refuses to be her next thrill ride. When he claims her, it will be for good. But the attraction is undeniable, and the more they fight it, the stronger it pulls. But will it be enough to conquer their obstacles?

To the women who are currently serving in our nation’s military or have served—thank you.

First, thank you to my wonderful agent, Jill Marsal at the Marsal Lyon Literary Agency, for challenging me every step of the way, and for finding a wonderful home for this story at Avon Impulse.

To my editor, Amanda Bergeron, your insights and suggestions made this story shine, and for that you have my humble gratitude. This story marks my Impulse debut and my first opportunity to work with Avon’s talented and hardworking marketing, publicity, and art departments—thank you for your efforts. And a special shout-out to Shawn Nicholls and Gretchen Swartley. You both are awesome.

Thank you to Monica Jelden for sharing your knowledge about the timber industry. Any mistakes are my own.

I could not have written this book (or any book) without the support of my family. To my children, thank you for inspiring me every day. I promise to always protect you from scary bears.

GEORGIA TRULANE WALKED into the kitchen wearing a purple bikini, hoping and praying for a reaction from the man she’d known practically forever. Seated at the kitchen table, Eric Moore, her brother’s best friend, now her boss since she’d taken over the care of his adopted nephew until he found another live-in nanny, studied his laptop as if it held the keys to the world’s greatest mysteries. Unless the answers were listed between items b and c on a spreadsheet about Oregon timber harvesting, the screen was not of earth-shattering importance. It certainly did not merit his full attention when she was wearing an itsy-bitsy string bikini.

“Nate is asleep,” she said.

Look up. Please, look up.

Eric nodded, his gaze fixed to the screen. Why couldn’t he look at her with that unwavering intensity? He’d snuck glances. There had been moments when she’d turned from preparing his nephew’s lunch and caught him looking at her, really looking, as if he wanted to memorize the curve of her neck or the way her jeans fit. But he quickly turned away.

“Did you pick up everything he needs for his first day of school tomorrow? I don’t want to send him unprepared.”

His deep voice warmed her from the inside out. It was so familiar and welcoming, yet at the same time utterly sexy.

“He needs another one of those stuffed frogs. He can’t go without his favorite stuffed animal.”

If she hadn’t been standing in his kitchen practically naked, waiting for him to notice her, she would have found his concern for the three-year-old’s first day of preschool sweet, maybe even heartwarming. But her body wasn’t looking for sentiments reminiscent of sunshine and puppies, or the whisper of sweet nothings against her skin. She craved physical contact—his hands on her, exploring, each touch making her feel more alive.

And damn it, he still hadn’t glanced up from his laptop.

“Nate will be home by nap time,” she said. “He’ll be there for only a few hours. You know that, right?”

“He’ll want to take his frog,” he said, his fingers moving across the keyboard. “He’ll probably lose it. And he sleeps with that thing every night. He needs that frog.”

She might be practically naked, but his emphasis on the word need thrust her headfirst into heartwarming territory. Eric worked day and night to provide Nate with the stability that had been missing from Eric’s childhood thanks to his divorced parents’ fickle dating habits. She admired his willingness to put a child who’d suffered a tragic loss first.

But tonight, for one night, she didn’t want to think about all of his honorable qualities. She wanted to see if maybe, just maybe those stolen glances when he thought she wasn’t looking meant that the man she’d laid awake thinking about while serving her country half a world away wanted her too.

“You’re now the proud owner of two stuffed frogs,” she said. “So if that’s everything for tonight, I’m going for a swim.”

Finally, finally, he looked up. She watched as his blue eyes widened and his jaw clenched. He was an imposing man, large and strong from years of climbing and felling trees. Not that he did the grunt work anymore. These days he wore tailored suits and spent more time in an office than with a chainsaw in hand. But even seated at his kitchen table poring over a computer, he looked like a wall of strong, solid muscle wound tight and ready for action. Having all of that energy focused on her? It sent a thrill down her body. Georgia clung to the feeling, savoring it.

His gaze dropped to her breasts, briefly, before returning to her face. He’d rolled up the sleeves of his white button-down dress shirt, revealing the corded muscles of his forearms. From across the kitchen, she could see those muscles tensing, his hands forming fists.

Yearning to touch? To pull at her bikini strings? Or was that wishful thinking on her part? Was she so crazed with desire for the six-foot-two man with the short black hair she longed to run her fingers through that she was imagining his reaction? Maybe he was horrified that his friend’s little sister looked as if she belonged poolside at a Vegas hotel. Or maybe he was so shocked he didn’t know what to make of the suit she’d ordered from Victoria’s Secret. He generally saw her in jeans and a T-shirt while she chased after Nate, or for the years before she’d become his nanny, her US Army fatigues.

“Eric, it’s eight o’clock and it is still August. The sun hasn’t disappeared behind the mountains. It’s the perfect night for a swim.”

He lived on two hundred acres on the outskirts of Independence Falls, a small town in the heart of Oregon’s Willamette Valley, surrounded by mountains. The water was always cold. And she loved it that way. It made her feel alive.

“It will be refreshing.” Georgia paused, biting her lower lip. She had a long list of reasons not to ask. That she might lose her temporary job as his nanny came a close third to the fact her brother would kill her. But her top reason? Pushing their friendship into uncharted waters might blow up in her face.

He’d always been there for her. When she’d gone out drinking for the first time in high school and downed one too many, she’d called Eric, not her brother or her parents, for a ride. Now Eric ran a multimillion-dollar timber business, the largest in the Pacific Northwest. Yet he’d taken the time to email her every few days while she’d served overseas.

Eric Moore was her friend. But she’d been sneaking I-want-you glances at him since she was a teenager. She’d dreamed about him, fantasizing about how he would look stripped out of his business suits.

Common sense told her the safe and sensible thing was to walk out the door now without another word. Let her dreams remain in her head. Pursuing Eric could lead to disaster. But she’d witnessed tragedy and chaos firsthand, rendering her brother’s demand from their conversation this morning impossible. Settle down, Georgia, her brother had said. But she couldn’t. She refused to calmly watch her life pass her by filled with longing for a man she shouldn’t want. Now that she was home safe and sound from a war zone, she was done holding back.

“Maybe you should join me,” she said. “I could grab the monitor for Nate’s room. The signal reaches to the pond. We’d hear if he woke up.”

Heat flashed in his eyes. No, she hadn’t imagined it. It had been a long time, more than a year, since a man had looked at her as if he wanted to get close enough to touch her. Still, she remembered. But Eric quickly buried the spark of desire. Shaking his head, he returned his attention to his computer screen.

“Too much work.” This time his tone was tight and on edge. She could hear the longing, the wanting, but knew he was holding back because he thought it was the right thing to do. Georgia shrugged. “Suit yourself.”

She crossed the kitchen, heading for the sliding door that led to bluestone patio and down to the pond. Her back was to him, but she felt his gaze on her as she slipped out into the night.

The cool air danced across her skin as she walked barefoot over the stones, down to the grass, and toward the dock. She needed this—the mountain air, the feel of the grass between her toes, the cold rush of water on her skin. She’d returned home with a burning desire to experience the world around her in short, heart-stopping bursts. She craved the adrenaline, the rush that proclaimed loud and clear she was alive. If she slowed down, she might feel all those things that threatened to overwhelm her—the pain of losing her friends, the fear that her world would never be right again. And she refused to let her experience in Afghanistan engulf the rest of her life.

Georgia ran faster, taking comfort in her body’s strength, inside and out, drawing solace from her ability to push forward. Slowing down was not an option no matter how much her brother wanted her to return to the quiet life she’d led before she’d joined the army. She wanted to jump from airplanes, feel the wind in her hair as she galloped across an open field on horseback, and more than anything, she wanted to make love. Now. Tonight. She refused to wait, allowing the days to disappear.