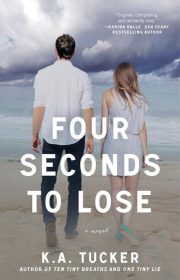 When a gorgeous young dancer walks through his door, a strip club owner must decide whether to follow his rules or his heart in the third novel by the author of One Tiny Lie and Ten Tiny Breaths.
Owning a strip club isn’t the fantasy most guys expect it to be. With long hours, a staff with enough issues to keep a psych ward in business, and the police regularly on his case, twenty-nine-year-old Cain is starting to second guess his unspoken mission to save the women he employs. And then blond, brown-eyed Charlie Rourke walks through his door, and things get really complicated. Cain abides by a strict “no sleeping with the staff” rule. But being around Charlie challenges Cain’s self-control…and it’s been a long time since any woman has done that.
Twenty-two-year-old Charlie Rourke needs a lot of money, really fast, in order to vanish before it’s too late. Taking her clothes off for men makes her stomach curl but Charlie tells herself that at least she’s putting her acting and dancing skills to good use. And though her fellow dancers seem eager to nab their sexy, sophisticated, and genuinely caring boss, she’s not interested. After all, Charlie Rourke doesn’t really exist—and the girl pretending to be her can’t get distracted by romance.
Unfortunately, Charlie soon discovers that developing feelings for Cain is inevitable, and that those feelings may not be unrequited—but losing him when he finds out what she’s involved with will be more painful than any other sentence awaiting her.

To Lia and Sadie.

You’re not allowed to read this book for a long, long time.

I believe some people are inherently evil.

I believe guilt is a powerful motivator.

I believe redemption is something you can strive for but never fully achieve.

I believe second chances exist only in dreams, never in reality.

I believe you don’t have years, or months, or weeks to impact a person’s life.

Seconds to win them over,

And seconds to lose them.

Blood drops decorate the dusty gray concrete like an abstract piece of art. The stocky brute facing me—his bottom lip split open, an angry cut across his cheekbone—can account for some of that. But given the colossal beating I’m taking at the hands of this recently paroled rapist, most of that blood is probably mine.

Holding my left elbow tight against the ribs that he just splintered with a series of powerful blows, I struggle not to wince as my feet shuffle back toward the ropes of the makeshift ring. Screams and shouts bombard me from all angles, echoing through the underground parking lot of the downtown business building. Normally I have a decent crowd of rich bitches throwing their names, numbers, and “pretty boy” comments at me. Not tonight, though. All of these people took the twenty-to-one odds against me and they’re no doubt picturing sandy beaches and shiny BMWs.

Hell, I almost bet against me. But, there’s not a person in the world that I trust with that kind of money to place it for me. Except maybe Nate. But he’s fourteen and a known associate of mine, so I might as well have painted a target on his head if I sent him to the bookie.

“Come on, pansy ass!” Jones bellows, slamming his meaty fists together, a wicked grin on his face.

I remain silent as Nate splashes my face with cool water and I swig some back, trying to rinse the coppery taste out of my mouth. I’ve heard this guy likes to draw his beatings out, so I’m not worried about him charging me like a bull. I am worried about the crowd shoving me in, though. I can feel their impatience swelling in the air over my pause. They want to see my skull hit the ground. Now. This is real underground fighting. The kind that brings the high-rolling criminal element and thrill-seekers together like family at Christmas. There are no weight classes here. No drug tests. No rules. No true refereeing. The match doesn’t end until one fighter’s broken body is collected off the ground.

Not exactly the world a loving father would introduce his son into. But I don’t have a loving father. I have a mean wannabe-mobster prick of a dad, who—after pounding on me enough to teach me how to hold my own and harden my muscles beyond their years—decided he could make some real cash by throwing me into L.A.’s illegal fighting scene. At the age of seventeen, when my body wasn’t even fully developed but was solid on account of the grueling workouts my dad insisted on. I can’t say that I went unwillingly. I’ve even enjoyed it, most times. It’s always my dad’s face I’m bashing in, his bones I’m snapping, every time I raise my fists.

Every time I pulverize my opponent.

And now, at nineteen years old, I’ve ended up fighting for my life in the upper echelon of this illicit world. I could win big on this one with what I put down. Or I could end up in a body bag. As I gaze at the goon in front of me—steroid-enhanced pecs twitching with anticipation, ugly veins protruding from his neck, his face a hideous mess of blood and ink—I accept that I probably won’t be the last one standing here, tonight. I’m a fucking moron for showing up to this fight. Jones is likely high on meth. Nothing short of two shots of fentanyl is going to bring the animal to his knees, and I don’t have elephant tranquilizers in my back pocket.

“Zee!” Nate’s voice cracks behind me, using my fighter name. I glance over my shoulder at the scrawny kid in my corner. My only reliable confidante, the one by my side through every single fight. He’s holding his cell phone to his ear, his ebony skin turned a sickly ashen tinge. “Somethin’ big is going down at Wilcox.” Wilcox. My parents’ street. Nate’s wide molasses eyes flicker to my waiting opponent before returning to my mangled face.

“They fighting again?” I ask. It wouldn’t be the first time.

Nate’s head shakes slowly, somberly. “Nah, something different. Benny saw two guys show up about twenty minutes ago.” Benny’s a fifteen-year-old kid who lives across the street from my parents and goes to Nate’s school with him. He’s a shithead, but he worships Nate because Nate is connected to me.

“For him or her?” As disturbing as the question is, it’s valid. Both of my parents took entrepreneurial paths down the wrong side of morality—my dad venturing into the drug trade, my mother running a quaint bookkeeping business/ brothel out of my late grandmother’s house. And now one of them has clearly pissed someone off enough to track them down on their doorstep.

Normally, I wouldn’t give a shit. I’d be ecstatic. Maybe, if my dad pissed off the right people, they’d get rid of my problem for me. Only it’s one in the morning on a Tuesday, and Lizzy, my sixteen-year-old sister, could be asleep in her bed. And, if these guys came looking for money and my dad goes to the hollowed-out armchair to pay them off, he’s going to find it empty.

Because I stole every last bill earlier today to put down on this fight.

A new visual blazes in my head. One of these guys collecting their payment on Lizzy.

That’s all it takes for my adrenaline to kick in. The crippling pain in my side instantly vanishes as I look at my opponent through new eyes. If I bury the odometer needle, I can get to their house in under fifteen minutes. It may be enough time. It may not. This goon is the only thing stopping me from leaving right now.

I toss my water bottle to the ground and charge forward.

It’s over so fast, no one watching seems to know what the hell happened. Silence fills the vast parking lot as everyone waits for Jones to get up. Everyone except me. I know he’s not getting up for a while. I felt the bones crack as his head snapped to the side with the venomous blows that I delivered in quick succession.

He still hasn’t moved as my peeling tires screech up the underground ramp.

“Stay here,” I bark at Nate as I pull my GTO to a stop in the middle of the street. I’m not sure how I didn’t crash, given that one eye is swollen shut. I jump out, running past the crowd of curious onlookers, toward the throng of emergency vehicles and police officers, lights flashing, cops running with radios in their hands. They couldn’t have beaten us by more than ten minutes.

It takes four police officers, a gun aimed at my forehead, and a set of handcuffs to stop me. They won’t let me go in. They won’t answer the one damn question I ask over and over again. Is Lizzy okay? Instead, they hammer me with an onslaught of words that don’t register, that I don’t care to acknowledge.

“What happened to you, son?”

“How do you know the occupants of this home?”

“Where have you been since midnight until your arrival here?”

Despite my warning, Nate ventures out of my car and somehow slips through the police tape. Like a silent shadow, he waits with me as a young paramedic tapes the gash above my eyebrow and informs me that I have three broken ribs.

I barely hear her as I watch a parade march in and out of my parents’ front door.

As I watch the coroner show up.

The beginning of dawn lights the sky when one . . . two . . . three gurneys finally roll out.

All topped with black bags.

“I’m sorry for your loss, son,” a stocky police officer with a gruff voice offers. I didn’t catch his name. I don’t care about his name. “Things like this shouldn’t happen.”

He’s right. They shouldn’t. Lizzy shouldn’t have been there in the first place. If I hadn’t given up on her, if I hadn’t kicked her out of my apartment, she wouldn’t have.

I could have saved her.

But now I’m too late.

“What do you mean you can’t deliver until after the weekend?” Despite every effort to keep my cool, my tone is biting.

“Sir, I’m sorry. As I’ve already explained, we’re experiencing labor shortages. We’re working as fast as we can to cover orders. We’re sorry for the inconvenience,” the customer service rep recites evenly, sounding like she has said it a hundred times today. Because I’m sure she has.

Pinching the bridge of my nose to dull the sudden headache forming, I fight the urge to slam the receiver against the desk. This conversation is a complete waste of time. It’s the same one I’ve had every day for two weeks. “Tell your management that ‘inconvenient’ isn’t the right word.” I hang up before she has a chance to spew the prewritten response for that.

With a groan, I lean back in my leather chair and fold my arms behind my head. I survey the walls of my office—lined floor-to-ceiling with shelves, doubling as supply room overflow. Five weeks of abnormally busy nights at Penny’s coupled with sporadic beer deliveries means I’m out of our top brands for the coming weekend. That means I’ll have to spend yet another Saturday night explaining to customers why being out of Heineken doesn’t entitle them to a free lap dance.