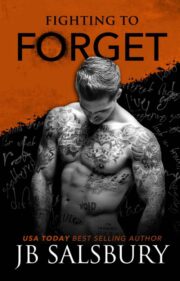 Every fighter is drawn to the violence, the release that a perfect hit can bring.
But very few are drawn to the pain.
Rex Carter lives behind a wall of indifference. The demons from his childhood act as an anesthetic, keeping him distant from emotional connections. Only the ache from a knock to the jaw, the sting of a tattoo needle, or the heat from a piercing can jolt him back from the numbness. The fiery pain is all he can feel, and nothing compares to the burn.
Or so he thought.
Working in a Las Vegas bar isn’t Georgia McIntyre’s dream. But she hopes it’ll be an end to the nightmare.
She’s watched him, followed him and kept tabs, all in preparation for this moment: to make amends and share the secret she’s been carrying since she was a kid. But she didn’t count on the feelings that seeing him again would stir up, the vacant look in his stormy-blue eyes, and his perfect body now mutilated by ink and metal.
And she knows why. She’s lived his pain every single day, since the day he left.
Changed by time, Rex doesn’t remember the girl from his past. If only she could do the same.
Will she get the absolution she’s spent her life seeking?
Or will he continueFighting to Forget?

To every child who waited for a savior that never came.

“Vengeance is mine; I will repay, saith the Lord.”

I’m waiting, watching the glowing numbers on my Little Mermaid alarm clock. It’s been quiet in the house since twelve oh eight. I close my eyes and listen hard for their voices, but I can only hear the sawing of my dad’s snore through the wall. As much as I want to race downstairs, I have to wait until they’re asleep. I can’t risk getting caught. Fresh marks on the backs of my legs still sting from the last time they found me outside of my room after bedtime. I’ll wait two more minutes just to be sure.

My tummy hums as if one hundred June bugs are buzzing inside. I’ve chewed off all my fingernails, so all that’s left is the area around them. I nibble and pull at tiny strips of skin. The salty blood hits my tongue and I move on to the next. My bare foot taps silently on the wood floor.

Blinking through the darkness, I watch another number flip. Time is moving too slowly. I have to hurry. I know he’s waiting for me. He needs me on these nights—the nights after he has a visitor.

My parents say that foster kids are trouble and that’s why he has to live in the basement. We’re homeschooled and my mom never lets him out; she only brings a few books for him to read. I’ve snuck things to him, sliding them through the space underneath the basement door that’s only big enough to fit my hand. I want to know him, but Mom and Dad say he’s not safe.

I hop from my bed and creep across the bedroom and into the hallway. Wait. I should bring him something. I turn back to my room and grab a stuffed animal, a light brown bear wearing a blue T-shirt that says Las Vegas, NV. My dad brought it back from a work trip he went on. It’s soft and should be small enough to slide through the gap under the basement door.

Sneaking back into the hall on my tiptoes, I stop at Mom and Dad’s bedroom and press my ear to the cold wooden door. They’re asleep.

One by one, I take the steps as softly as I can. The wood creaks beneath my foot. I freeze and listen. Nothing but quiet. It’s safe to move again. I skip every other step until I’m finally at the bottom. I run to the kitchen.

I can already hear him.

I’m not even to the basement door, and I can already hear him.

My chest pulls tight. What do his visitors do to him that makes him so sad?

I run and drop to my knees at the door; my flannel pajama pants make me slide on the tile. I lay my cheek on the ground and search through the space beneath the door, but it’s too dark. His cries echo off the concrete walls.

“Shhh, it’s okay. I’m here.” My whispers disappear in the black and get lost in the sound of his pain. “Please, stop crying.”

Don’t wake them up.

His gagging sounds make my stomach hurt bad. I reach up and wiggle the door handle, the way I always do when I come to see him, and like all the other times, it’s locked.

He must’ve heard me, because he stops crying. I drop my cheek again, and a small light, maybe a flashlight, moves around in the dark.

“Hey, it’s okay. It’s only me.” I wait, watching as the light gets closer until finally I see him.

His cheek drops to the floor just like mine, and then one bright blue eye appears. The white part of his eye is red, and the skin around it is puffy, but it’s still the prettiest color blue I’ve ever seen, like the sky after a monsoon, when all the clouds clear and the sun is almost blinding against it. Dark black eyelashes are clumped together from his tears, and thick black hair is stuck to the part of his forehead I can see. His nose is red and his lips are swollen.

“You came.” His words are croaked, and he hiccups on the leftovers of his crying.

“Yeah, I’m here.” I reach my hand through the crack and he quickly snatches it in his. “Are you okay?”

His grip on my hand tightens, and he wraps his other hand around my fingers too. “Better now.”

“I brought you something.” With my free hand, I shove the bear under the door.

His eye darts down, and he releases one hand to snatch the bear. “For me?”

“Yeah, he’s really soft. I thought it might help you sleep.”

He’s quiet, staring at the bear. “Sleep.” He clutches it between his hands and mine. “Thanks, Gia.”

The visitors who make him cry have been showing up more and more. At first it was the same men, but now there are new faces. I get locked in my room while they’re here, but I see them leave the house from my window. My mom tells me it’s none of my business when I ask why he gets visitors and I don’t. I guess they’re the foster care people coming to check on him. Maybe they tell him he’s a bad kid. That would make me sad.

“Was that man mean to you?”

His eye goes wide, he breathes in a deep breath, and his lip shakes.

Watching him cry feels funny. I don’t know much about boys, but I’m pretty sure ten-year-old ones don’t get this sad.

“Shh, it’s okay.” I try to hold his hand tighter, to let him know I’m here and not going to leave him, but his grip is so strong my fingers don’t move. “You’re not a bad kid, shhh.”

His crying gets louder. My heart races.

“Please, it’s okay.” I turn to look behind me out of fear that one of my parents will catch us. I don’t want to go back into the dark. “They’ll wake up if we’re not quiet.”

Some nights are bad like this, where he can’t calm down enough to breathe. On these nights, there’s only one thing that works to make him stop. The first time I tried it I was desperate for anything that would work. It did.

I start off in whispers and sing one of the only songs I know by heart, “Silent Night.” He quiets and his breath comes in hitches, until finally he stops crying. The song is so easy, I keep singing to avoid him breaking down again. Finally, my voice croaking and throat dry, I stop.

“I’m gonna die in here.” His voice so soft I wonder if I imagined it.

“Don’t say that. If I can figure out where they hide the key, I could—”

“Shh.” The heat in my cheeks warms and moves into my chest. “We’ll figure it out. But it’s late.”

We sit like this for a long time—not talking, only touching beneath the door—each of us with one eye on the other. My shoulder hurts, my arm is pins and needles, and my hand is numb.

I yawn and my eyes flutter closed. “You should go to sleep.”

“Anything. Your voice is enough.”

I sing a few lines of “Rudolf the Red-Nosed Reindeer” and try to force my eyes to stay open. Finally, his blue eye disappears beneath the splotchy pink lid. His hold on my hand loosens. He’s fallen asleep.

I’m so tired from all the worry and fear that my body melts into the tile floor. “I don’t know what’s happening to you down here, but I promise I’ll be here for you always. I’ll get you out of here. You don’t think I can because I’m only eight, but I can. I will.” I slide my hand back from under the door and watch to make sure he doesn’t wake up.

Pushing up, I stretch and wiggle my fingers. Placing my hand flat on the only thing that separates us, that stupid door, I make a silent promise to save my foster brother from whatever’s hurting him. No matter what it takes.

Because inside my shell I’m that boy

Who was never given a say

The real me I’ll cover and destroy

To keep the worst of the pain away.

I look just in time to see a bottle sailing through the air, and I snag it before it hits the dirt. “Thanks, man.”

Talon drops down into the folding chair next to me. I pop the cap on my beer and take a long drag. The bonfire flickers, illuminating at least two dozen faces standing around it. Some friends, others strangers, most shitfaced.

I keep my eyes to the fire but, with my peripheral vision, tune in to a few new faces that look as if they’re out to shake shit up.

“How many crates did Lane throw in that bitch?” He scoots his chair back a foot, distancing himself from the fire. “That shit’s hot. How can you sit that close?”

Talon’s been Ataxia’s drummer since the band started. He should know me better than to ask that.

“Not that hot, my ass. That thing’s like, what, at least five feet of pure flame.” He cringes away from the fire. “Good thing we’re out in the boonies or the cops would be all over our shit.”

It’s become a tradition, coming out here in the middle of nowhere with nothing but our dirt bikes and enough beer to intoxicate a small country. Our band has been playing so many local clubs lately it’s a nice change from the everyday Vegas nightlife.