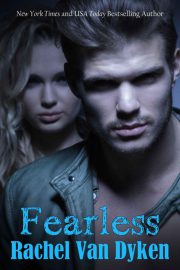 Ruin — 2.5
When I met Kiersten, time stood still. It was as if every cell in my body screamed HER. I couldn’t look away, I couldn’t walk away, I couldn’t even move. My other half, my soul mate, was staring right at me. I had to have her. I had to make her mine. But I felt selfish doing that—knowing that I may not have endless amounts of time to give her…and even now that every things’ over with and I’ve been given that time back.
Nothing is ever certain in this life.
Which is why I’m about to do something crazy, impulsive, daring.
After all, what type of person would I be if I didn’t take my own advice?
I’m jumping off the cliff, I’m living fearlessly.
This is the continuation of Wes and Kiersten’s story.

The human heart beats around one hundred thousand times a day. It pumps over two thousand gallons of blood through over sixty miles of blood vessels in any given twenty-four hour period. The physical greatness would be staggering enough, given those facts. But the emotional capacity? Words can’t explain. Doctors can’t describe why certain parts of your heart react to anger, sadness, joy, and love. Why, when you laugh, your heart laughs with you. When you cry, your heart breaks for you. But the most amazing fact of all? How easily we give our heart away even with the knowledge that in another person’s hands you are the most vulnerable you will ever be.—Wes Michels

I sat in one of the pool chairs at my house. The mid-afternoon fog gathered around the Sound making it look more magical than eerie. Every time I exhaled, I could see my breath—proof that I was living.

My muscles ached and my head felt like it was going to explode. I was still trying to figure out if I liked living in that moment or if I wanted to stick my head in the sand and let out a little cry.

I was trying to balance wedding planning with Kiersten, drama with Gabe, and spring training with the Seahawks.

Life was quickly spinning out of control… not in a bad way, but if there was anything I’d learned in my twenty-two years of living, it was that even good things could end up being bad if you didn’t put what was important first.

She was most important.

I winced as my muscles debated whether or not they were going to work or cease from functioning and let me fall on my ass.

“Wes?” Kiersten’s pretty voice floated through the air. The sound of her voice was always like a balm to my soul, it reminded me of the first time my name had the honor of being formed by those beautiful lips. I could be in the worst mood—and just hearing her voice, my name and her voice mixed together, was enough to fix everything.

Moving slowly because I felt like an old man with a walker, I turned and gave her a bright smile.

“What’s wrong?” She ran towards me and grabbed my hands. Her green eyes filled with tears.

“Why do you assume something’s wrong, baby?”

“Aww…” I pulled her into my arms, knowing that it was going to hurt like hell when she squeezed around my midsection. “I’m just in a bit of pain, that’s all.”

Her eyebrows furrowed together in concern. “Your chest?”

“No.” I chuckled stroking her red hair with my fingertips. “My entire body. Those workouts are rough.”

“Oh.” She sighed in relief, almost melting against me. “So you’re fine? Your heart’s fine? Everything’s fine?”

“Sweetheart…” I slowly released her and looked into her deep green eyes, framed by dark lashes and flawless skin, she still took my breath away. “Are we going to have to have another one of those talks where I tell you not to freak out every time I’m doing something other than smiling?”

Her shoulders sagged. “Probably. It’s just everything with Gabe and Saylor—it just reminds me of last year and… I don’t know. It’s too close to home, you know?”

“Yeah.” I sat back on the chair, pulling her down with me until she sat in my lap. “I know.” My hands instinctively dug into her red hair, my fingers twisting her silky locks. Each strand had a mind of its own as it wrapped around and slid through between two fingers, only for me to grab another piece and repeat the process. Each touch of her hair shot an obsessive need to have her—straight through me.

With a groan, she laid against my chest. “It’s kind of cold out here. What were you doing anyways?”

I swallowed the panic and told myself that being nervous was ridiculous. Kiersten had seen me at my best and my worst. She could take anything.

“Remember last year? When I told you I wanted to marry you a year after I woke up from surgery?”

She tensed in my arms. “Yeah.”

“So…I don’t want to do that anymore.”

“I can’t wait.” I stopped her from pulling completely away from me. “If I have to wait one more week I’m seriously going to lose my mind.” I kissed her exposed neck and sighed against it, my body finally relaxing now that I was in her arms. “I want to get married now.”

“I lied. I wanted to be married the day you said yes.”

“I’ve spent my entire life being patient, Kiersten. I’ve spent my life waiting. Waiting to live, waiting to die, waiting to hear good news, waiting to hear bad news. And for once, I really, really, want to be selfish and screw the whole waiting process. I want you. I want you right now. I want you in every way a man could want a woman. I want you every second of every day. I want to give you my name. I want to live with you. I want to take care of you. I want to have kids with you. I want to massage your feet after a hard day. I want to hug you when you’re sad. I want to hold your hand when you’re sick. I want to hold you in my arms and never let go—even waking up in the morning with our bodies intertwined, won’t be enough for me. Breathing your air destroys me because I can taste you in everything—even when your lips aren’t anywhere near mine—damn, I can taste them, I taste you. I want you so deeply etched in my soul that I don’t know where I end and you begin. So, Kiersten, I’m going to pull the whole “I was dying and this is my dying wish card”—because every day I’m not with you. Every day that goes by when I don’t get to share every single moment with you…is like waiting to die all over again. So, will you marry me? Not in another eight months—will you marry me….now?”

“How…” Kiersten’s hoarse voice shook. “How in the world do you expect me to answer that?”

My chest ached deep inside like I’d held my breath for too long and my lungs were about to explode. Was she rejecting my proposal?

“I would have married you the second you asked, Wes. Had the doctors said they could only keep you alive for five minutes, I would have spent those five minutes in your arms—loving you. Time is precious—and I want to give you all of mine. So marrying you today? Even if I was in nothing but jeans and a t-shirt. Even if I was running a fever or got hit by a car…I’d do it. I love you. My heart’s been yours since the minute you needed it to beat for you. So Wes…” She cupped my face and peered deep into my eyes.

With one look, she exposed everything I had ever been or would ever be. I stopped breathing.

Then her lips tipped upward in one of her gentle smiles. “My answer’s yes.”

“Really?” I choked and gasped for my next breath. “You mean it? Right now?”

Her eyes narrowed. “Sure. Right now.”

“Oh good.” I smiled, kissing her mouth once… twice, considered a third but spoke instead. “I’m so glad because that would have been super embarrassing.”

Kiersten bit down on her lower lip and pulled back from me. Her gaze searched behind me then behind her.

I looked too. Nothing but swirling fog in both directions.

Those beautiful, accusing eyes returned to me, and she raised one eyebrow. “What did you do?”

“I read so many romance novels someone should seriously cut my balls off and take my man card.”

“You think I don’t notice,” I said, smirking. “But I see what you and your Kindle do at night.” Laughing, I cupped her chin. “Why didn’t you just tell me you wanted me to storm your castle? I would have totally bought a horse.”

“And, really, there were so many highlights on that one contemporary romance where the guy was a hockey player that I almost thought about trying out for the NHL.”

“But what really got me,” I whispered, “was that every single one of your quotes…were about true love. About surprises and a lot of them, about being fearless.”

Her eyes smiled. “You taught me that. To be fearless.”

“Yeah, well.” I slowly nudged her off my lap and got to my feet, bringing her with me. “I’m taking a cue from all that advice and all five hundred of those romance books and doing something really scary.”

“Marrying me is scary?”

“Hell, no,” I growled pulling her against my chest, kissing her head, damn just touching her shook my self-control. “But planning an impromptu wedding in front of all your friends and family without telling you? Yeah, it may have freaked me out.”

“What?” Her eyes went were so wide that I was afraid she was going to pass out from the strain. “I’m sorry, impromptu wedding?”

“Surprise?” I lifted her into my arms and carried her into the house.

“But I didn’t see anyone and—”

“Oh, thank God.” The words came out in a rush as Lisa slumped in relief and smiled. “She said yes!” The relief was short-lived, as two seconds later Lisa was running towards us with a hairbrush in one hand and some sort of torture device in the other. “We only have like two hours.”

I set her on her feet and kissed her forehead. “See you girls at the ceremony.”

Lisa and I both nodded then shared a high five behind Kiersten’s head.

“You think my dad would let me forget about Uncle Jobob? Geez, they’re worse than two old ladies. I’m shocked your uncle kept the secret this long. Now, go get ready. I’ll see you in a bit.”