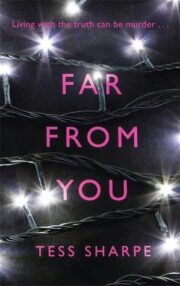 Nine months. Two weeks. Six days.
That’s how long recovering addict Sophie’s been drug-free. Four months ago her best friend, Mina, died in what everyone believes was a drug deal gone wrong — a deal they think Sophie set up. Only Sophie knows the truth. She and Mina shared a secret, but there was no drug deal. Mina was deliberately murdered.
Forced into rehab for an addiction she’d already beaten, Sophie’s finally out and on the trail of the killer — but can she track them down before they come for her?

who gave me all my great loves.

who believed this would happen, even when I didn’t.

You’d think it would: two terrified girls in the middle of nowhere, cowering together, eyes bulging at the gun in his hand.

But it doesn’t start here.

It starts the first time I almost die.

The first time, I’m fourteen and Trev’s driving us home from swim practice. Mina has the windows rolled down, her hands dancing to the music, rings glinting in the late afternoon sunlight as we speed past barbed wire fences and scrabbly ranches, the mountains stretching out behind them. We sing along to the radio in the backseat, and Trev laughs at my off-key voice.

It happens fast: the screech of metal on metal, glass everywhere. I’m not wearing my seat belt, and I pitch forward as Mina’s scream drowns out the music.

The second time, I’m seventeen and annoyed with Mina. We’re already late, and now she’s turning off the highway, onto Burnt Oak Road.

“Just one little detour. It’ll be quick, I promise.”

This is a mistake.

The first time, I wake up in a hospital room, hooked to an IV and beeping machines.

There are tubes everywhere. I claw at the one down my throat, panic climbing inside me, and someone grabs my hand away. It takes me a second to realize it’s Mina beside me, to meet her gray eyes and focus enough to let her words sink in.

“You’re going to be fine,” she promises.

I stop fighting and trust her.

It’s only later that I learn she’s lying.

The second time, I remember everything. The beam of the car’s brights. The shooter’s eyes shining at us through his mask. How steady his finger is on that trigger. Mina’s hand clutching mine, our nails digging into each other’s flesh.

After, I’ll trace my fingers over those bloody half-moon marks and realize they’re all I have left of her.

The first time, I spend weeks in the hospital. The doctors put me back together piece by piece. Surgical scars snake their way up my leg, around my knee, down my chest.

Her hands shake when she helps me button my sweater.

The second time, there is no hospital. There are no scars.

There is only blood.

It’s everywhere. I press hard against Mina’s chest, but my jacket’s already soaked through.

“It’s okay,” I keep saying. Over and over. She stares up at me with shocked, wet eyes and takes gulping breaths. Her body shivers beneath my hands.

“Sophie…” My name wheezes out of her. She lifts her hand, drags it toward mine. “Soph—”

It’s the last thing she ever says.

I look across the desk. From her shiny pumps to her tasteful, “natural” makeup, there’s not a hair out of place on her. When I met Dr. Charles, all I wanted to do was mess her up. Slip the glasses down her nose, crush one of those perfectly pressed French cuffs. Tear into that neat, orderly mask and get down to the grit, the chaos.

Chaos has no place in recovery, Dr. Charles would say.

But I crave it. Sometimes even more than the Oxy.

That’s what happens when you’re trapped by clean white walls, endless therapy sessions, and piped-in new-age music for three months. The order and rules get to you, make you want to screw up just for the messiness of it.

But I can’t afford that. Not now. Freedom is so close, I can almost taste it.

“I guess,” I say, when I realize that Dr. Charles is waiting for an answer. She’s big on getting answers to her nonquestions.

“Are you nervous?” she asks.

“No.” It’s the truth. I can count on one hand how many times I’ve been honest with her. Including this one.

Three months of lying is exhausting, even when it’s necessary.

“There’s no shame in being nervous,” Dr. Charles says. “It’s a natural feeling, given the circumstances.”

Of course, when I finally do tell her the truth, she doesn’t believe me.

Story of my life.

“It is a little scary.…” I let my voice go reluctant, and Dr. Charles’s neutral therapist mask almost slips at the prospect of a confession. Getting me to open up has been like pulling teeth. I can tell it bugs her. One time she asked me to walk her through the night of Mina’s murder, and I knocked over the coffee table, glass shattering all over as I tried to get away from her—just another thing I’ve destroyed in Mina’s name.

Dr. Charles stares like she’s trying to see through me. I stare back. She may have her therapist mask, but I have my “I’m a drug addict” face. She can’t ignore that, because deep down, buried underneath all the other things I am (crippled, broken, scarred, and grieving), I am a drug addict—always will be. Dr. Charles understands that I know this about myself. That I’ve accepted it.

She thinks she’s the one responsible for my change from raging to recovering, but she’s not. She doesn’t get to take the credit for that.

So I stare her down. And finally she breaks the eye contact and looks at her leather portfolio, writing a few notes. “You’ve made tremendous progress in the time you’ve spent at Seaside Wellness, Sophie. There will be challenges as you adjust to living a drug-free life, but I feel confident that with the therapist your parents have arranged for you and your commitment to recovery, you’ll succeed.”

She shuffles some papers, and just when I think I’m free and clear, she drops the bomb: “Before we go downstairs, I’d like to talk with you a little more. About Mina.”

She looks up at me then, carefully monitoring my response. Waiting to see if I’ll break her new coffee table. (It’s wood this time—I guess she figured she needed something sturdier.)

I can’t stop it: the way my lips tighten up and my heartbeat thuds in my ears. I force myself to breathe, in and out through my nose like in yoga, relaxing my mouth.

I can’t slip up. Not now. Not when I’m this close to getting out.

“What about Mina?” My voice is so steady, I want to pat myself on the back.

“We haven’t talked about her in a while.” She’s still watching me. Waiting for me to freak, like I have every time she’s forced this. “Going home is a big adjustment. A lot of memories will come up. I need to make sure you’re in the right frame of mind to deal with them without…” She tugs at her left cuff.

This is another of her tactics. Dr. Charles likes to make me finish her sentences. Own up to my mistakes and faults.

“Without going on an Oxy binge?” I supply.

She nods. “Mina and her murder are triggers. It’s important you’re aware of that. That you’re prepared for the challenges her memory may bring up—and the guilt.”

I have to stifle my knee-jerk response. The one that screams, “Her murder wasn’t about drugs!”

It’s no use. No one will believe the truth. No one will believe me. Not with the evidence in front of them. That fucker in the mask had covered his bases—he knew I’d never notice the drugs he planted on me, not after he’d shot Mina and knocked me out. My mom called in every favor imaginable to get me into Seaside to deal with my supposed relapse instead of being booked for possession.

Dr. Charles smiles at me. It’s both bland and encouraging, a warring twist of pink lipstick.

This is my final test; I have to be careful with my words. They’re my ticket out of here. But it’s hard, almost impossible, to keep my voice from shaking, to stop the memories from creeping back. Of Mina, laughing with me that morning, both of us unaware that she’d end with the day.

“I loved Mina,” I say. I’ve practiced it a hundred times, but this can’t sound rehearsed. “And her murder is something I have to deal with for the rest of my life. But Mina would want me to move on. She’d want me to be happy. And she’d want me to stay clean. So I’m going to do that.”

“And what about her killer?” Dr. Charles asks. “Do you feel ready to talk to the police about what you might know?”

“I loved Mina,” I say again, and this time my voice does shake. This time it’s the truth, and nothing but. “And if I knew who killed her, I would be screaming his name at the top of my lungs. But he was wearing a mask. I don’t know who it was.”

Dr. Charles leans back and examines me like I’m a fish in a bowl. I have to bite the inside of my lip to stop it from trembling. I keep my breathing steady, like I’m holding a difficult yoga pose and have to power through.

“She was my best friend,” I say. “Don’t you think I know how I screwed up? I barely sleep sometimes, thinking about what I could’ve done differently that night. How I could’ve stopped it. How it’s my fault. I know all of that. I just have to learn to live with it.”

This is the truth.

The guilt—it’s real. It just doesn’t come from the place that Dr. Charles thinks it does.

It is my fault. For not stopping Mina. For not asking more questions. For letting her act like a newspaper story was something to keep top secret. For following her lead, like always. For not being faster. For being crippled, unable to run or fight or do anything to protect her.

“I’d be happy to talk to Detective James again,” I say. “But he doesn’t think I’m the most reliable witness.”