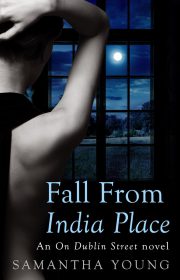 The New York Times bestselling author of On Dublin Street and Down London Road returns with a story about letting go of the past and learning to trust in the future…
When Hannah Nichols last saw Marco D’Alessandro, five long years ago, he broke her heart. The bad boy with a hidden sweet side was the only guy Hannah ever loved—and the only man she’s ever been with. After one intense night of giving into temptation, Marco took off, leaving Scotland and Hannah behind. Shattered by the consequences of their night together, Hannah has never truly moved on.
Leaving Hannah was the biggest mistake of Marco’s life, something he has deeply regretted for years. So when fate reunites them, he refuses to let her go without a fight. Determined to make her his, Marco pursues Hannah, reminding her of all the reasons they’re meant to be together.…
But just when Marco thinks they’re committed to a future together, Hannah makes a discovery that unearths the secret pain she’s been hiding from him, a secret that could tear them apart before they have a real chance to start over again….

For Kate and Shanine.

And for Mr. Neil Innes.

Remember tonight, for it is the beginning of always.

I’d made a promise to myself when I stepped onto the cobbled streets of Edinburgh on the way to my first teaching job that I’d be the kind of teacher who would do whatever it took to reach my students. Never mind that now keeping that promise meant embarrassing myself and them with my fantastically awful drawing skills.

Removing my badly drawn illustrations from the projector, I replaced them with two sentences.

I glanced up at the small class of six adults, ranging in age from twenty-four to fifty-two, and gave them a wry smile. “Though I hate to deprive you of my artistic genius, I think I’d better get rid of those.”

Portia, my fifty-two-year-old student, who had enough good cheer to lighten the often nervous atmosphere in the small classroom, grinned at me, while Duncan, a thirty-three-year-old mechanic, snorted. My other four students continued to stare at me wide-eyed and slightly scared, as though everything I said and did was a test.

“Now that you’ve learned these sight words and hopefully connected to them through my terrible attempts at drawing, I want you to become familiar with how they fit in an everyday sentence. For the rest of our time this evening I want you to write these two sentences ten times each.” I watched Lorraine, my very, very anxious and prickly twenty-four-year-old student, gnaw at her lip, and winced at the thought of what she might do to said lip after my next instruction. I continued. “I’ve got two small booklets here for each of you. One is filled with sight words, the other with sentences made up entirely of sight words. I want you to choose ten sentences and write those sentences out ten times each and bring them with you next week.”

Lorraine blanched and I immediately felt my chest squeeze with empathy. Lorraine was a prime example of why I’d decided to volunteer to teach an adult literacy course at my local community center. Some people, like my friend Suzanne, thought I was absolutely nuts to take on a volunteer teaching job during my probationary year as a high school English teacher. And maybe I was. My workload for school was insane. However, I shared the literacy class with another volunteer, so it was only one night out of my week – and it was something that really made me feel like I was making a difference. Sometimes it was harder to see the impact I made in high school, and I knew that there would be an awful lot of days ahead of me when I wouldn’t feel like I was leaving much of an impression. However, volunteering gave me that sense of satisfaction every single time. The adults I was teaching were mostly unemployed, with the exception of Portia and Duncan. Duncan’s employer had asked him to improve his reading and writing skills. Portia had somehow managed to get through life on a very basic understanding of literacy and numeracy (until one day she decided she wanted more), but the others were struggling to maintain employment because of their lack of language and communication skills.

I knew illiteracy was still a big deal in this country, but since I came from an educated family, and was a massive bookworm, it was something I had never been touched by. Until last year.

There was one moment during my teacher training year that would always stand out: I was in contact with a student’s father who had been visibly shaken when asked to look at his child’s work. Sweat beaded on his forehead as he confessed in a halting voice that he couldn’t read it. Then, when I asked him to sign a permission slip that would allow us to take his daughter with us for the class trip to see Twelfth Night in the theater, his hand badly trembled as he made a squiggle on the signature line.

The utter fear and humiliation in his expression due to his illiteracy really hit me emotionally. I could feel the sting of tears in my eyes for him. A grown man made to feel weak and helpless by letters on a page? I didn’t like having to witness his struggle, and later that night I started looking into local literacy courses. I put out some inquiries and a month or so later St. Stephen’s Centre, my local community center, had contacted me because they had just lost one of their volunteer teachers.

Despite the fact that the small class seemed a bit dubious about having a woman younger than they were as a teacher, I really felt we were getting somewhere.

“Hannah, your head is blocking the word between ‘wash’ and ‘cold,’” Duncan said teasingly.

“Is that your polite way of telling me I’ve got a big head?” I said, moving off to the side so they could all see the board.

“Why, thank you. I grew it myself,” I drawled cockily.

He groaned at the daft joke, but his eyes were filled with mirth as Portia hee-hawed behind him.

Smiling, I let my eyes roam over the heads bent low to their jotters, pencils moving at different speeds, from the painstakingly slow and deeply grooved print to the fairly fast and sweeping handwriting. The smile died on my lips at the sight of Lorraine. She kept looking around at the others, panic in her eyes as she saw them getting on with the work.

She caught me looking and glowered, then lowered her eyes to her jotter.

I was losing her. I felt it in my gut.

Once I called time up, I walked over to Lorraine before she could bolt. “Can you stay back for a few minutes?”

She narrowed her eyes and licked her lips nervously. “Eh, why?”

She didn’t reply, but she also didn’t leave.

“Thanks for tonight, Hannah!” Portia called over to me, her voice probably carrying all the way down into Reception. I always spoke a little more loudly than I had to in class because I had a feeling Portia had a slight hearing problem and was unwilling to admit to it. She was a glamorous woman who benefited either from great genes or fabulous anti-aging creams, and anyone could tell she took a lot of pride in her appearance. Admitting to illiteracy was one thing, but admitting to being hard of hearing would signify her age, and I doubted she wanted anyone to think she was older than she felt inside.

“You’re very welcome,” I called back fondly, smiling and waving good-bye to the others as they thanked me and left.

Turning back to Lorraine, I was completely prepared for it when she crossed her arms over her chest and snapped, “I dinnae see the point in me stickin’ aroond since am done wi’ this shite.”

She rolled her eyes. “Aye, I bet ye did. Whitever.” She started to walk toward the door.

“You leave and you’ll be right back at square one. Unemployable.”

“And is that what you want?”

Lorraine whirled around, her eyes spitting fire as she sneered, “Whit? Is that no gid enough fer ye? Aye? Too fuckin’ gid tae be a cleaner? Look at ye. Whit the hell dae ye ken aboot hard graft and huvin’ nae money? And am supposed tae learn fae ye? I dinnae think sae.”

Calmly, I took in her dark hair scraped back into a scraggly ponytail, her cheap makeup, her inexpensive and untidy shirt and trousers, and the thin waterproof jacket she wore over them. Finally, I saw the scuffed boots that had seen too many rough days on her feet.

Lorraine was only two years older than me, but there was a hardness in her eyes that made her appear much older. I didn’t know anything about her life, but I did know she was lashing out at me because she was scared.

Who knows? Maybe she was also lashing out at me because of the way I talked, looked, dressed, and held myself. I was educated. I was confident. Two things she was not. Sometimes that’s enough for someone to take a dislike to you. Was I the wrong person to teach Lorraine? Perhaps. But I wasn’t quite ready to give up.

“Working hard comes in all forms, Lorraine,” I told her quietly, careful to keep the kindness out of my voice in case she made the assumption I was being condescending. “The cleaners in the high school where I teach work their arses off tidying up after those kids.” I wrinkled my nose. “I don’t even want to think about what they find in the boys’ toilets.

“But I work my arse off teaching those very same kids – lesson plans, piles of marking that eat into my evenings and weekends, spending my own personal money on resources because the school never seems to have enough in the budget, and I work on the lesson plans for this class and I teach this class for free. I know what it’s like to work hard. It’s not as physically tiring as cleaning, but it’s mentally draining.” I took a step toward her. “You’re used to physical hard graft, Lorraine. This stuff” – I gestured to the board – “this is completely out of your comfort zone. I understand that. But that’s why I’m here. I’m here to teach you to read and write so you can apply for a job that you actually want, and you wouldn’t be here if you wanted to be a cleaner.

“Although, on a side note I’m guessing you’d still need reading and writing skills for that job. There are applications to fill out, client checklists to read through…” I saw her lips pinch and got back to the point. “You don’t like me, fine, I could give a shit. I don’t need you to like me. I need you to listen to me when I say I’m not here to embarrass you or make you feel bad about yourself. I’m here to teach you. You don’t need to like me to learn what I have to teach. You do need to like yourself enough to believe you deserve more out of life.”