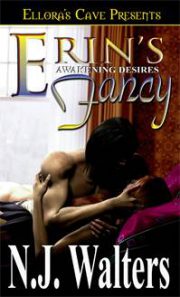 «Seven Sex Positions That Will Drive You Both Wild » Deciding that she needs a sex life, Erin Conners studies this magazine article to learn how to seduce a man. When Abel Benjamin Garrett unexpectedly returns home, Erin decides to test her newfound knowledge and have a summer fling with him. He’s been at the center of all her erotic fantasies since her teens and she wants to try out all seven sex positions with him. Erin doesn’t think she’ll have any problem getting Abel to co-operate. After all, what red-blooded male doesn’t want a no-strings, hot summer affair? Burnt out from his work, Abel has come home to rest and re-evaluate his life. He awakens one morning to find a gorgeous, naked woman in his bed. There is one problem-the sexy goddess is his best friend’s sister. But Abel finds it impossible to resist Erin’s open and honest sex appeal. But a secret from his past may force Abel to leave long before summer’s end. Furthermore, Abel is not content to be Erin’s summer lover. Unknown to her, he plans to be her lover for all time and in more than just seven ways.

Erin Connors ran her index finger over the glossy magazine cover with the scantily clad cover model and underlined the article, “Seven Sex Positions That Will Drive You Both Wild!”

Taking a deep breath, she opened the cover and scanned the table of contents. She flipped through the pages, stopping at, appropriately enough, page sixty-nine, and spread the magazine wide on the scarred wood table in front of her. Bold pink letters flashed up at her from the page. Legs on shoulders, Doggy-style, Sixty-nine, Standing Backward Position, Face-to-Face, Spooning and Scissors. She could feel the heat creeping up her face as she perused the pictures of half-naked couples, with strategically placed clothing and blankets, demonstrating the techniques.

Glancing up, she peeked out the open back door and noted that the yard was empty. Her brother Jackson was busy in the barn and Nathan had already left for work. The coast was clear. Sighing, she rubbed the back of her suntanned neck. It was pathetic that a woman of twenty-five had to hide the fact that she was reading a woman’s magazine. Especially a magazine that gave advice about sex. That’s what came from still living at home at her age, and having two, very large, very protective older brothers, one of whom was a local deputy sheriff. They still treated her like some kind of nun who supposedly never even thought about sex, much less had sex.

That was entirely the problem. She hadn’t had sex. Well, technically she had, but she didn’t count graduation night in the back of Brad Hutchinson’s pickup truck out at Peak’s Pond. That had been a lot of fumbling, a little pain, and a whole lot of nothing! It had been such a disaster that Erin had never quite worked up the nerve to try it again. Not that she’d had much of an opportunity.

The fact of the matter was that men didn’t notice her. Well, they noticed her, but not for the right reasons. Erin was what was known as “a big girl”. Six feet tall in her stocking feet, her arms and legs muscular, and her shoulders wide from working side by side with her brothers, tended to be off-putting to a lot of men.

It wouldn’t have been so bad, but the only part of her that wasn’t large was her breasts. She’d gotten shortchanged in that department. Though nicely rounded, they tended to disappear in the overalls and loose shirts she wore for work.

Still, she wasn’t ugly. Her hair was deep auburn, but it was a thick, curly mess that wouldn’t hold a style, so she usually kept it confined in a single braid that fell to her waist. She had the Connors blue eyes, the pale blue of a sunny summer sky, just like her brothers Jackson and Nathan. Her nose tilted up just slightly and had a light dusting of freckles, and her lips were wide and full. It was a nice face, a comfortable face, and that was part of the problem.

Erin looked like the proverbial girl-next-door with her wholesome looks. Tagging behind her older brothers, doing the same work, had quickly labeled her a tomboy. By the time she’d become interested in what it meant to be a girl, everyone was used to her being just one of the guys. None of the girls in the neighborhood or at school had liked her because she was a friend to all the boys. Conversely, all the guys liked her because she didn’t act like a girl.

The problem was that when all the boys grew into men and the girls grew into women, Erin was left out. The men started dating and she was still just one of the boys. Everybody’s pal, that was her. And she hated it. Maybe not all of it. But damn it, she was a woman too, with women’s needs, except no one ever seemed to notice. If she was ever to get the sweaty, grinding, orgasmic sex that she wanted, she needed help.

Turning her attention to the article, she began to read aloud. “Any man who’s being truthful will tell you his favorite position is doggy-style. It’s very primal and sexy to your man.” Okay, she’d grown up in a farming community, so she could understand the animalistic appeal to a guy.

“Just get down on all fours and stick your ass in the air. No, it’s not the most dignified position in the world.” Erin pictured it in her head and thought that this was an understatement. In fact, she figured it would look pretty ridiculous, but what did she know. These people were the experts or they never would have gotten published in this magazine.

As her eyes drifted closed, the image in her head changed slightly and came into sharper focus. She saw herself kneeling on the kitchen linoleum with her face pressed to the cool floor and her ass stuck up in the air. A man stood behind her, but she couldn’t quite picture his features, but his deep voice washed over her, filling her with pleasure…

“Spread your legs wider and offer yourself to me.”

Erin could feel her juices run down her legs as she slid her knees as far apart as they would go. She could feel the heat rolling off of him as he knelt behind her. Without warning, he gripped her hips with his large hands and thrust his cock deep inside her. Moaning, she ground her bottom against him. He laughed and slipped his hands up to cup her breasts. “You know you want me to fuck you, don’t you?”

“Yes,” she cried. “Fuck me. Hard.” He began pumping into her from behind.

Erin’s eyes popped open and she gasped for breath, desperately trying to focus on the magazine page in front of her.

Grabbing her tall glass of iced tea, she took a huge gulp and continued to read. “We guarantee he’ll go crazy. As he enters you from behind, he’ll go in very deep and will hit your G-spot. He can also stimulate your breasts and clitoris in this position.” She paused to take a deep breath.

“He most certainly can,” she panted. Her underwear was wet and she could feel her inner muscles contracting slightly. She wasn’t even sure where her G-spot was, but she was certainly feeling hot. The glass was sweaty and cool, and she rubbed it against her cheeks and neck. It made her feel slightly better.

Plunking the glass back on the table, she continued reading the article. “The standing backward position is simple. Standing about two feet from the wall, turn around and face it, bracing your hands against it. Stick out your behind and allow him to enter you. He can thrust harder because you can brace yourself, and he can still stimulate all parts of your body as well.”

Erin could feel her nipples pushing against her sports bra and had an almost overwhelming urge to rub them. Uncomfortable with her thoughts, she squirmed slightly to get comfortable in her chair, but that only made things worse as she could feel the heat between her thighs. So far the only thing she’d learned was that men really seem to like to have sex from behind. That, and make herself incredibly uncomfortable and aroused.

Again a picture formed in her mind of her naked and facing a wood paneled wall. His voice rumbled behind her.

“Bend over and lean against the wall.” He stood behind her, towering over her making her feel small and feminine for the first time in her entire life.

His hairy thighs brushed against her smooth ones as he inserted himself between her legs. She could feel his hard cock pressed against the dark cleft of her ass and it made her shiver. He reached a hand between her legs and parted her slick folds before pushing himself deep inside her. The feeling of fullness was incredible and the urge to move was too powerful to ignore.

Erin plastered her thighs together and squirmed on her chair. God, she’d never been this close to coming before. The buzz of the dryer shocked her and her eyes popped open, she glanced frantically around the kitchen. For a moment, she’d forgotten where she was, the feelings so real, so intense. Wrapping her arms around her waist, she took a few deep breaths to calm herself before venturing back to her magazine.

More determined than ever to learn all she needed in order to seduce a man, she smoothed the pages of the magazine wide open. If she didn’t learn, then she’d never have sex. And at this very moment, she wanted it more than anything she’d ever wanted in her entire life. Boldly, she returned to the article. “Face to face,” she read. Finally, she sighed to herself, something a little different.

Clearing her voice, she continued. “Sit on his lap, facing him, and wrap your legs over his hips and lock your feet behind his back. Once, he’s inside you, keep it slow and steady, and just rock. He can use his hands for support on the bed. Take advantage of this position for some heavy necking…” Her voice faded as she finally got a face to go with her fantasy man. No longer was he a nameless, faceless body. This was not just any man. This was the man. With his intelligent pale green eyes, high cheekbones, square jaw and full, kissable lips, it was a face no woman in her right mind would ever forget— Abel Garrett.

He had grown up on the farm next to theirs and was friends with both her brothers. For as far back as she could remember, she’d wanted him to notice her. As he’d grown from tall, lanky boy to an incredibly handsome man, her infatuation with him had intensified. But she’d never been more to him than Jackson’s younger sister, treating her with the same careless affection and kindness as one would a cute little puppy, ruffling her hair whenever he came over to spend time with her brothers. He’d leased his family’s land to her family and left home right after high school. And except for a short yearly visit, he’d stayed away for the last fourteen years.

If she was left with nothing but a fantasy, then this man more than fit the bill. Licking her lips, she went back to the article. “Legs on shoulders,” she whispered. This one looked promising. “Lie on the bed and have your man kneel between your legs. Place your ankles on his shoulders as he enters you. He has access to your breasts and clitoris and can hold your behind if he wants to thrust hard. A great position for both of you.”