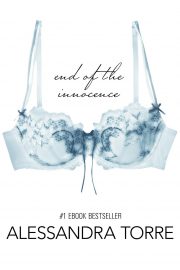 He thought I owned him. He thought he loved me, that I was enough. But this animal, this sex god who could drive me crazy and steal my heart in the same breath, he would never fully be mine. It was impossible. No one ever owned a God…
One year. I have one year to find out more about this man I am marrying. More about his family. More about our sex, and all of the dirty, delicious places it will take me.
I thought I’d spend this year making a decision. I never thought the decision would be taken from me, snatched right from my naive little hands.

End of the Innocence

To the women who teach their sons to open doors, respect women, and make us laugh. Thank you.

They say you will never love someone like you love your children. But my love for Brad was so consuming, so boundless. It stretched my universe and took over every breath, heartbeat, and thought. How could I possibly love anyone more? It seemed impossible.

Blindfolded. It was how this whole thing started; it was the birth of my sexual awakening, the first loose thread that started the unraveling of my inhibitions. It almost seemed fitting that, in what could be the end of my life, I was, once again, blindfolded.

I woke up in pure blackness, my senses reawakening one by one, slowly reporting grim details of my surroundings. Sight. Pure dark, so complete in its entirety that I felt a wave of claustrophobia hit me. Sound. Muffled voices, hard tones filled with anger, hate, and—most terrifying of all—glee. The rustle of fabric against my ear as I twisted my head, the sound informing my brain that I was, in fact, blindfolded. Smell. A sickly-sweet scent, coming from the blindfold, almost—but not quite—overriding the dirty, masculine stench that reeked in this room. Taste. Wet cloth in my mouth, tugging at my skin, keeping my tongue in place, the horrible aftertaste of vomit in my mouth. Touch. Hands bound behind my back with rough, scratchy rope. Ankles spread and secured to chair legs beneath me. Sitting upright, utterly secured, my body recognizing, even without sight, the bruises that covered me.

My brain understood everything about the situation at once, bursting into reality in one, horrific instance, like stepping into the harsh sun, painful in its strength. I screamed through the blindfold, my effort producing only a small sound, and strained every muscle, thrashing my body from side to side, trying to free some small part of my body in at least one minor way. The chair rocked, tipped, and in an agonizingly slow motion, tipped backward and crashed to the concrete floor. The impact slammed my head back, and with one painful crack, my body stilled, all senses instantly snuffed.

Fiancée. It was a role I knew, had been in just a couple of months earlier. But now, back in the title, with Brad De Luca as my future husband, it felt completely different. I woke slowly, pulling myself out of sleep, aided by the warm sear of his skin against my bare back, the sigh of his breath against my hair, the thrust of his pelvis as he let me know he was up in the naughtiest way possible. Yes, I could get used to this. Yes, I could spend the next fifty years of my life waking up in his arms.

I rolled over, putting us face to face, his eyes still closed, his mouth curving into a smile. I studied the thick line of his lashes, the peace on his face, peace that would disappear as soon as his eyes opened, as soon as intensity stole over his features and dominance ruled the beautiful canvas of his face.

Then his eyes opened, and I lost some of my breath. Five minutes later, he took that breath in a completely different way. With my back arched against the sheets, my hands deep in his hair, the glitter of diamond on my finger the only thing respectful and sane about our union.

I dressed for work, pairing a gray suit and cream shirt, and was putting on earrings when Brad came out of the bathroom, wrapped in a towel, steam following him into the room. He stopped short when he saw me, frowning slightly. “Are you wearing that to my father’s house?”

I turned away from the mirror, wincing slightly when my earring didn’t go the right way through my ear. “No, sweetie, I am wearing this for work. That place that I go to during the week?” I looked at my watch. “The place I will be late to if I don’t run downstairs and eat.” I moved my hand quickly down, but not before my bare finger caught his eye.

“It’s ah, on top of the safe. I figured you could put it inside.”

He stepped forward slowly, the scent of soap and masculinity disturbing my senses. “And why would I do that?”

“I don’t know ... so it doesn’t get stolen?” I smiled sweetly at him and reached for my makeup bag, his iron grip grabbing my wrist before I made it to the pink plastic. I frowned up at him, tugging with my wrist until he finally released me.

“What is this about?” He towered over me in my bare feet, and I struck a defiant pose, looking up at him with all the tenacity I could muster.

“It’s about me trying to get to work on time.”

“I thought you agreed to come to my father’s with me.”

“This seems suspiciously like something I would attempt.” He folded him arms, looking down at me, a frown on his face—a frown that was fighting to keep from breaking into a grin.

“Good. Then you should see the wisdom in it.” I reached for the makeup bag again, and he blocked my arm. I threw up my hands. Fuck the makeup. Moving around him, I headed to the bathroom.

“Okay, so you don’t want to go to my father’s. Fine. What’s the deal with the ring? You don’t like it?” He had the nerve to look almost hurt. Almost. I don’t think anything could hurt this man’s ego.

I rolled my eyes at him. “I love the ring. Fucking Marilyn Monroe would love that ring. It’s not that.”

“Yes.” I set down the toothbrush I was preparing and turned to him. “I am more than a little freaked out by the idea of the office knowing about our engagement. I didn’t commit to working for CDB past this semester. Why go through all that when I can just keep it a secret ‘til this semester ends?”

“I’m not used to being hidden, Julia.”

I groaned inwardly, wanting to be anywhere other than here, having any discussion other than this one. Especially when I was running late. “I am not hiding you. I am avoiding lots of questions, discussions, and evil stares. Please, Brad.” I clasped my hands in front of me and tried my best puppy-dog stare, one that I had not had much practice in, and I think a sad clown face ended up coming out instead.

He looked at me with a mixture of confusion and amusement, then threw up his hands and left. With a smile, I relaxed, picking up the toothpaste tube.

He was back before I had time to begin brushing. He set the ring box down with a thud on the marble counter next to me. “Wear it.” I threw the toothpaste down and turned to him with a retort on my lips. “I’ll be in the office around ten. I’ll tell my staff, so you can either be the engaged assistant who looks like she’s hiding her engagement, or you can be the confident fiancée I know you are. But I am not going to spend the next seven weeks pretending you don’t exist when I want to tell everyone the good news.” He winked at me, turned on his heel, and left, my retort dying a slow and painful death in my throat. Ugh. Great first day of engagery. I had a brief understanding of what it must have been like for Luke. I had been a pretty heavy-handed dictator in that relationship.

I steamed my way through the entire teeth-brushing process, staring at the damn velvet box the entire time. I had absolutely no doubt that Brad would do exactly as he had promised, telling the news to anyone and everyone he met. A small part of me, one that jumped up and down and did the salsa, was happy that he was proud. Proud of me, of our relationship, of our engagement. That he wasn’t treating it as a prison sentence. I tried to suffocate the happy part of myself but failed miserably.

I opened up the velvet box and looked at the ring again. It was so heartbreakingly beautiful, and I was terrified of falling in love with it and then one day having to give it up. I picked out the ring and slid it on, my knees weakening a little in the process. I allowed myself a brief, small happy dance in the middle of the bathroom, then put on my game face and headed downstairs.

I entered the kitchen and waved hello to Martha, hoping to grab a bagel and escape without interrogation, but I knew from the way she set down her hand towel and beamed at me, that I wasn’t going to get out easily.

“Julia.” She held out her arms and came around the island, pulling me into a strong, soft, lavender-scented embrace. “I am so happy for you.” She tightened the hug, and I laughed at the sheer strength of it.

I pulled out of the hug. “I’m sorry, is this the same woman who told me to get my ass out of her house, just—what—two weeks ago?” I grinned mischievously and shot around her, grabbing an orange and some grapes from a bowl on the counter.

“Nope. That was bitchy Martha. You’re part of the family now, so I’ll keep her hidden away.” She waddled after me. “You’re not eating just fruit. Let me fix you something else.”

“I can’t,” I warbled from a mouthful of grapes. “I’m late for work already.” She glared at me, and I saw a bit of the Martha I remembered. “I’ll eat tonight, whatever you make, I promise!” I called out the last two words as I trotted out the door, pulling it softly, but firmly closed behind me. I stopped short when I saw my Camry, parked to the side of the garage, Brad, on his cell, leaning against it. He saw me and met me halfway, ending the call and holding out my keys, his eyes sweeping over my ring finger.

I snatched the keys from his outstretched hand, stepping up on my tiptoes and giving him a brief kiss. “Thanks.”