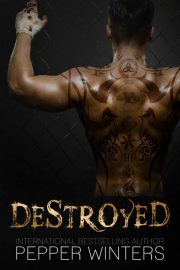 She has a secret.
I’m complicated. Not broken or ruined or running from a past I can’t face. Just complicated.
I thought my life couldn’t get any more tangled in deceit and confusion. But I hadn’t met him. I hadn’t realized how far I could fall or what I’d do to get free.
He has a secret.
I’ve never pretended to be good or deserving. I chase who I want, do what I want, act how I want.
I didn’t have time to lust after a woman I had no right to lust after. I told myself to shut up and stay hidden. But then she tried to run. I’d tasted what she could offer me and damned if I would let her go.
One secret destroys them.

For finding redemption in love.

For finding a second chance in hope.

I didn’t believe her when she said she was complicated.

She didn’t believe me when I said I had secrets.

I didn’t understand the truth, even when she let me glimpse behind her mask.

She didn’t understand that I couldn’t live with the consequences.

I thought she was a saint.

She thought I was a sinner.

Too bad we didn’t try to find the truth.

We both paid the price.

We destroyed each other.

If I knew now what I suspected then, I’d like to think I would’ve done things differently. I would’ve planned better, worked harder, stressed out on more important things. But I was young, naïve, and woefully unprepared for the big, scary world of life.

Now, I looked back on the past with a strange fondness. While I lived it, it seemed hard but now it seemed so incredibly easy. Especially now when the present seemed impossible and the future dire and bleak.

That was...until I met him.

Then it got worse.

“I don’t think this is a good idea, Clue.” The gothic mansion rose from gravel and soil like a beacon of doom. Gargoyles decorated plinths and overhangs; huge pillars soared to at least six stories high. I didn’t know anything like this existed in Sydney, let alone in the rich and exclusive Eastern Suburbs.

My fingers hadn’t stopped twitching for my knife ever since we stepped off the bus and headed toward a residential suburb instead of the party district in town.

Losing ourselves in a rabbit warren of streets, my heart never settled sensing this might be one experience that would end up killing us.

“Stop being such a worrier. You said you’d come. I need my wing woman,” Clue said, her gentle voice edging to stern.

My mouth hung open, gawking at the intricate stonework, trying to see past the grandeur to unveil the tricks of such a place. It couldn’t be real? Could it?

It seemed misplaced—as if it’d been transplanted from a long past century. It sent chills down my spine, conjuring images of insane, broken women and psychotic, sadistic men.

Huge double doors halted our entry. The thick wood, embellished with wrought iron accents in the shape of a fox on a wintry night, cracked open to reveal a black-suited bouncer with oil-slicked hair. His body jammed the doorway like a mountain while his face crossed somewhere between a bulldog and a shark.

His eyes froze me to the spot, capturing us with just one look. His pupils were black as the night behind us and held a cocky glint.

“You better have the password; otherwise you’ll wish you never set foot on this stoop.” His gaze swept to the concrete beneath us. A motto had been painstakingly engraved with a chisel into the stone. It looked hand done and rudimentary, but held a certain threat all the same.

Was that Russian? I couldn’t make out the verse, but I inched to the side in my stupid kitten heels to avoid standing in the groove of letters.

“We were invited by Corkscrew. He gave us a one-night pass.” For the millionth time since I’d showered, donned this ridiculous gold and silver dress, and coaxed my thick chocolate hair into some resemblance of curls and waves, I wanted to throttle Clue.

She was my dearest friend, closest confident, flatmate, babysitter, and non-blood sister, but I wanted to kill her for dragging me out tonight.

Clue and I had history—linked by shared dreams and hopes. We wouldn’t let the other fail. And that was the only reason why I hadn’t knocked her out and dragged her unconscious body back home.

She knew all I wanted to do was return to our crappy two bedroom apartment and avoid the world. She also knew I’d suffered so much in the past few weeks that I’d hit rock bottom, and I had no energy left to fight. Life had effectively pulled the rug, the flooring, and the fucking planet from under my feet. I didn’t want to be here.

But as I grumbled and shed a tear on the couch, hugging my very reason for existence, she swore and cursed me. She reminded me that I might be in a bad place, but she needed me. That life goes on, solutions come, and tragedies happen. I couldn’t change the future by either moping on the settee or dressing up like a hooker and going out with her. And as much as I wished I had a hacksaw in my cleavage, to threaten her to take me home to Clara, I didn’t.

“Corkscrew, huh? What discipline?” The bouncer crossed his arms, raking his eyes over me. I’d lost weight from the stress of the last few weeks, but it didn’t stop me feeling like an over-stuffed sausage in Clue’s slinky dress.

My stomach twisted as I plucked the loaned attire that clung to me like a second skin. A web of lace covered my shoulders, but it couldn’t disguise the sluttiness. My entire figure was on show, complete with perky nipples from the chill in the evening air.

Damn Clue and her fetishes for blingy, completely impractical clothing. She always forced me to wear the worst one. She said I was too serious; too focused; too obsessed with creating a future where nothing bad from the past could find us.

And she was right.

Tears pricked the back of my eyes again, and I swallowed hard. I shouldn’t be here, dammit. What am I doing?

“Muay Thai,” Clue answered, her black almond eyes flashing with pride. Her latest acquisition, who I’d only met once, had successfully swept my commitment-phobic friend off her feet.

I didn’t even know how they met or his real name. And Corkscrew, what the hell kind of title was that?

My mouth pursed. I couldn’t stop the flash of fire; protective instincts rose to swell firmly in my chest. “Did you just call her sugar tits?” I’d never been one to stand by while another was ridiculed, embarrassed, or taken advantage of. I liked to think it was a strong character trait, but life had turned it into yet another flaw.

He chuckled. “Well, she has nice tits and she looks as sweet as sugar, so yeah. I did.” His eyes narrowed. “You got a problem with that?”

Clue patted my forearm, and I forced the retaliation from my tongue. My hands clenched, but I stayed silent. Giving him a verbal lashing wouldn’t help us gain entry into this illegal club for Clue to see her man.

Dismissing me, the bouncer looked back at Clue. “Spit out the code or leave. I don’t have time for this.”

“Thou may draw blood, but never draw life,” Clue whispered, layering her husky voice with a heavy dose of allure.

Even if the password had been completely wrong, the bouncer was so spellbound he would’ve let us in. His cocky attitude left; replaced with a smitten smile. Clue had magical powers over men. She was the exact opposite of me. I seemed to repel men, which was perfect considering my situation.

“Well, what do you know? You’re in.” He swung the door wide, spilling warm light into the darkness of the night. “Head down to the end, then to the left. The main arena is there. Don’t go into the other rooms unless invited.”

Clue smiled and brushed past him, deliberately letting him gawk at her cleavage. “Thanks so much.”

He nodded dumbly, letting me sneak past without fanfare.

My heart raced, taking in the ridiculously wide corridor. The heavy doors latched behind us, and all I wanted to do was run home to her.

You left her alone. With strangers. For this.

For this? This decadence, this richness, this mockery of everything that I needed in order to save her life. Instead of tears, anger filled me.

Whoever owned this monstrosity had so much more than they deserved. If only life had been kind enough to give me a way out. Give me a way to save her.

Clue spun again, grabbing my hands. “You’re not, Zel. And I’ll tell you why.”

Her thumb caressed my knuckles, trying to calm me, but just riling me up even more. “You’re not going home. Mrs. Berry will take great care of her. Life hasn’t ended outside our apartment. You need to remember why you fought so hard to get to where you are.” Her voice softened. “I’m losing someone I care deeply about and my best friend, too. You can’t die with her, Zelly. I won’t let you.” Her eyes tightened, full of grief.

The fucking tears that seemed to be a constant companion these days shot up my spine in a tingling wake. I squeezed my eyes to stop them from spilling.

Clue gathered me into her arms, whispering in my ear. “You’ll find a way. I swear. I know in my bones you’ll save her. Just like you saved me. You’ll have a lifetime together, and she’ll drive you nuts when she’s older.” Her voice thickened. “But you have to get out into the world to find a solution. You won’t find it hidden in the cereal box in a dingy flat you haven’t left in weeks.”