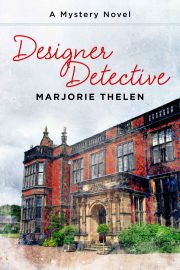 Fiona Marlowe, interior designer to the rich and powerful, finds her wealthy old client, Albert Lodge, dead on the floor of his library in the posh McLean suburb of Washington, D.C. As the investigation unfolds, Fiona discovers she has detective talent, and her innate curiosity spurs her into sticking her nose where it does not belong. Albert’s eighty year old eccentric sister, Opal, arrives from her ranch in south eastern Oregon to settle the estate. She has talked her ranch hand, Jake Manyhorses, into the role of private investigator as she is convinced one of the numerous family members murdered Albert for his money. With Opal’s encouragement Fiona joins Jake in the investigation as it spirals into the netherworld of betrayal, blackmail and smuggling, none of which Jake or Fiona bargained for when they said yes to helping Opal solve the mystery of Albert’s demise.

To my writer and reader friends everywhere, thank you. To the original Aussie girl, Bronwen Porter, who inspired me to write the book, a special thanks; to the Harney Basin Writers for the wind beneath my wings; and for John, always

What readers are saying about Marjorie Thelen’s books

“In Designer Detective the reader is taken along on a fun and fast-paced journey filled with unexpected villains and heroes and is treated to a surprising ending. I literally couldn’t put the book down and anxiously await Fiona’s next adventure.”

“The Forty Column Castle is a perfect blend of filial concern, romance, international intrigue, fashion, and surprising plot twists that create a lighthearted escape from the burdens of daily life. You'll have fun reading it.”

For The Hieroglyphic Staircase: “Of all the noted authors I have read, Larry McMurtry, Craig Johnson, Tony Hillerman and many others, who have that ability, Marjorie Thelen did a magnificent job of portraying every character and all the places where I could just imagine, or close my eyes and picture myself being in the story. It was really enjoyable. I have read some books where the author does not have that ability to transcend the reader from the comfort of their favorite chair to being present as the story unfolds. She does an excellent job. I enjoyed every chapter of the book and was sad when I got to the last page.”

The private investigator introduced himself as Jake.

“I understand you’re an interior decorator,” he said.

He cast his eyes around the room like maybe he didn't understand me right, like I'm glad you're not my interior designer.

We sat on my beige leather couch. His knees didn't quite fit between the couch and the black lacquer coffee table, overloaded with books and empty coffee cups that hadn't made it to the dishwasher. He spread his legs wide in the way only a man can do. His thighs were big, and his Levis fit tight. I like the curve of a man's thigh so I sneaked a discreet glance when he wasn't looking. I didn't think he noticed.

“I understand you found the deceased when you went to his house this morning.”

“Yes. I have a key. I let myself in because he leaves for work before I arrive.”

“What time was that?”

“Then you arrived late in the morning.”

“Yes.” I smiled like it was normal to report to work after eleven in the morning. I am not an early riser.

“Did you notice anything out of the ordinary?”

I thought that one over and felt a need to explain. “I was in a rush this morning and got held up in traffic. When I arrived at the Lodge estate, parked in the drive, ran through the downpour, struggled with the key in a Byzantine lock, banged open the door and shook off, I was in a foul mood. Finding Albert Lodge on the floor of the library was the final nail in the coffin, you might say. I wasn't at my most observant.”

“I see,” he said, writing in a little spiral notebook. “Describe finding the body.”

I thought back over the scene. “When I walked into the library, he was stretched out on the floor. I thought he was sleeping. Maybe he’d had a wild night. I sniffed the air for booze. Didn't smell like the inside of a bar. I shook him a little, called his name.” I did a mental pause. “Are you investigating a murder?”

His eyes came up from where he was writing in the little spiral notebook. Creases framed his eyes, and he looked as tired as I felt.

“The coroner ruled he died of natural causes.”

He addressed me like I was a bothersome child. “I’ve been hired by the family to find out if the death was, in fact, natural.”

“Right,” he said and checked his watch. “I was up at four this morning.” He plodded on. Tenacious guy. “You didn't notice anything about the deceased's house that would make you suspicious? Like a window open, glass on the floor, muddy foot prints?”

“No, nothing.” I was trying hard to remain patient. He was being too methodical for me. I wanted to jump to conclusions.

“After you tried to rouse him, what did you do?”

“I yelled for help, anybody, help. Loud. Several times. No one came.”

“Like I told the officer this morning, I picked up the phone and dialed 911, because I sensed we had a medical emergency on our hands.”

I must have put too cynical a twist on that last part because he looked up from his notebook. “Miss,” he glanced at his notes, “uh, Marlowe, I believe it is. I'm sorry if it's late, if you're tired, if I'm tired, if I'm asking a lot of questions. I'm sorry but a man is dead, and I am to determine if foul play was involved. If you'd like, if I'm inconveniencing you, I could come back in the morning.”

We stared at each other until I got uncomfortable and looked away. “I'll make coffee,” I said. “It sounds like we might be here all night.”

“No, thanks,” he said, holding up his hand to stop me from rising from the couch. “I'd like to get this done and get out of here. I got another stop before I crash tonight.”

I was impressed with his work ethic. I stepped out of my wiseass suit and answered the man's questions. He left in fifteen minutes, after scribbling his name and cell phone number on a piece of notebook paper. He must have been out of business cards.

“Call me,” he said, “if you think of anything that might help. Any little detail, no matter how insignificant.”

“Do you think Mr. Lodge was murdered?” I asked as we stood in the foyer surrounded by my collection of Australian aborigine masks.

“I don't know,” he said. “That's what I've been hired to find out. Good evening, Ms. Marlowe.” He gave me a two-finger salute, glanced around at the masks, back at me, then walked away down the hall to the elevator. He was taller than I and held himself erect, not the slouchy type, but the slope of his shoulders had some tired to them.

I looked at the piece of paper. Jake Manyhorses. What kind of a name was that?

I sat at my breakfast table window with a cup of organic fair trade coffee, enjoying the view looking across the Potomac River into Washington D.C. To the east the sun was trying to muscle its way through heavy gray clouds. This town had its faults, politics came to mind, but the view from Virginia of the Washington Monument and the Lincoln Memorial with the Capitol building in the background was spectacular.

I hadn't slept a wink. Visions of Albert Lodge's face schmushed on the gold Persian carpet kept playing in my mind. Maybe he’d had a heart attack or stroke. Someone must have been pretty clever to conceal a cause of death the coroner thought natural. Who would want to do away with a nice, old gent like Albert Lodge?

I was now unemployed. Too bad. I’d some great ideas for a new, contemporary look to the library. Being the practical woman I was, I fished in my purse for my cell phone to call a client who was waiting for me to faux paint her dining room. After dumping the entire contents of my Coach purse, which seconded as a briefcase, I discovered the phone was not in residence. I must have left it in Mr. Lodge's library when I tried to call 911 and couldn’t get a signal. That meant a trip back to his house. I still had the key, so there'd be no problem getting in. I should have given the key to the policeman or Jake Many Horses, but it slipped my mind. That happened to me.

I decided, as I pulled on a pair of black slacks and olive turtleneck sweater after a steamy shower, I should tell Jake about Mr. Lodge having the library redone to erase the memory of his wife. I had asked him why he wanted to re-decorate the library. He said his wife had decorated it. Now that she was gone, it reminded him of her and he wanted a change. He didn't mention whether the memory of the wife was a good thing or a bad thing.

Zipping along the George Washington Parkway on my way to McLean where the rich and powerful lived and misbehaved, it struck me like a hopper of molten steel that I was involved in a murder investigation. Goose flesh prickled on my arms, maybe even my heart. Talk about a chilling feeling.

I didn't know much about Albert Lodge. He had photos sitting about the library, but he hadn't talked about any of the people in the photos. Maybe I should do some looking around on my own when I got there. What if someone had murdered him? Maybe I should forget about getting the cell phone. But my perverse nature made me blunder on.

As I entered the open gate to the Lodge estate, I noticed a car parked on the side of the road in a ditch under a tree shedding golden leaves. That car wasn't there the day before. Or was it? It was a rust bucket that looked like something an illegal alien would drive, way out of place in this neighborhood. I stopped, whipped out my daily planner and made a note under today's date of the license plate number, color and model. We detectives had to keep track of clues. I'd tell Jake about it.