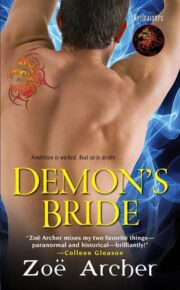 Leo Bailey may have been born to poverty, but ruthless business sense and sparkling intelligence have made money worries a thing of his past. It doesn’t hurt that the Devil himself has granted Leo the ability to read the future. But even infallible predictions are a declasse commoner’s trick to some members of the ton. They’ll never see Leo as their equal — one good reason to prove himself their better. And a noble marriage is an obvious start. Bookish Anne Hartfield, daughter of a baron, is hardly the flashiest miss on the marriage market. But her thoughtful reserve complements Leo’s brash boldness in an attraction neither can deny. A whirlwind courtship sweeps Anne and Leo into a smoldering marriage before either can believe their luck. But happiness built on Leo’s dark powers can’t last. Soon, Anne will have to save her husband…or lose her heart.

To Zack, through the fire and the forge

The Honorable Anne Hartfield had married a stranger.

The thought drummed in her head all day, through the morning ceremony at Saint George’s and the recitation of vows.

I, Anne Elizabeth, take thee, Leopold, to my wedded Husband, to have and to hold from this day forward, for better for worse, for richer for poorer, in sickness and in health, to love, cherish, and to obey, till death us do part, according to God’s holy ordinance; and thereto I give thee my troth.

He had slipped a ring upon her finger, of rubies and diamonds that had been purchased the day before—it was no family heirloom, no treasure passed from one generation to the next, but pristine from the jeweler’s workbench. It was beautiful, yet as Leopold Bailey had given her the ring, its red stones on the golden band reminded Anne of sunlight pierced by drops of blood.

With this Ring I thee wed, with my Body I thee worship, and with all my worldly Goods I thee endow: In the Name of the Father, and of the Son, and of the Holy Ghost. Amen.

They were married. She was no longer her father’s responsibility, but everything of her keeping now relied upon her husband. The food she ate, the clothing covering her body. The bed in which she slept, which she would sometimes share with her husband when he so chose to exercise his rights and make use of her body.

The thought made her stomach pitch to her feet. This night would see her enter into the state of married women everywhere, leaving behind the solitude of virginity. She belonged to him now, his possession.

Those whom God hath joined together let no man put asunder.

She watched him now, this stranger who was now her husband for the rest of her living days. Leopold Bailey. He stood with a group of guests, and though the breakfast at his Bloomsbury home was well attended, finding him in the glittering crowd proved itself an easy task.

Heat spread through Anne’s cheeks, and her father’s cousin chuckled. “There’s no shame in it, child, for he’s worth admiration.”

“Then we share an opinion,” Anne said. She almost checked herself, then remembered that she was now a married woman, and had the liberty of speaking with greater boldness. Unwed girls hadn’t freedom of opinion, for they were to be at all times agreeable. As Mrs. Bailey, she could opine as she wished. Though she did not know if her husband would encourage such behavior. Perhaps he would be one of those stern men who wanted only silence and obedience from his wife.

She rather hoped not.

“In my youth,” said Lady Byton, “we would have called such a man a ‘strapper,’ and so he is. Mark me, child, you’ll have the devil’s own time in the bedchamber, but I warrant it will put more roses in your cheeks.”

Lady Byton lived in the country.

Her cheeks already red, Anne studied her new husband. Her cousin’s assessment, coarse as it was, proved correct. The drawing room of his Bloomsbury house was filled with the wealthiest and most influential of London Society, men of extraordinary power, and men of extraordinary affluence. Yet no one commanded attention as Leopold did.

He was not much taller than any of the other men, yet the eye sought him out with unerring frequency. Normally, he eschewed a wig and wore his sandy hair back in a simple queue—rather like a laborer—but today he marked the occasion by having his hair dressed and powdered.

Even in his wedding finery of gold velvet and cream satin, his lean, muscular build could not be disguised, nor the breadth of his shoulders or length of his legs. A few of the wedding breakfast guests were sportsmen, just as Anne’s own brothers were, but Leopold carried his physicality in a way that suggested use and purpose rather than idle recreation.

Easy to imagine that Leopold was, in fact, the son of a saddler. Not a gentleman.

“Is his father here?” Lady Byton scanned the chamber. “With a son so handsome, surely the father is as well favored.”

Lady Byton clicked her tongue. “Such a disappointment.”

“I imagine the greater disappointment belonged to Mr. Bailey.”

“And the elder Mr. Bailey’s wife?”

“She was likely disappointed by her husband’s death, as well.”

Lady Byton pursed her lips. “As a woman happily widowed, I beg you to reconsider that notion.”

Anne had witnessed many marriages amongst the ranks of the gentry. A select few could be called truly happy; even fewer might be considered love matches. Love had no commerce when it came to marriage. Only in the pages of sentimental novels did girls and young men of standing find love. For herself, she hoped only to earn her husband’s respect and to give it in return. That she was married at all was something of a miracle.

A cloud of gillyflower perfume announced the approaching presence of Anne’s Aunt Louise before she even spoke a word. She enveloped Anne in a fragrant embrace, crying, “Oh, my child, I wish you happy on this wondrous day.”

“My thanks, Aunt.” Anne extracted herself from her aunt’s arms. Wondrous. She supposed it was.

Aunt Louise and Lady Byton hailed from opposite sides of the family and, after curtsying, eyed each other warily like two strutting hens.

“Lud, Clarissa,” Louise chirped to Lady Byton. “Is it really you? You are so altered from last we saw each other. Ah, well, I suppose all that country air has a rather ripening effect.”

“You are much the same as when last we met,” answered Lady Byton. She peered closer at Aunt Louise. “The paint is unchanged.”

Anne supposed she had better avert a full-scale war whilst there was still time, or else the iced cakes would be used as mortars and the wedding breakfast table would serve as battlements. “I was just telling Lady Byton that my husband’s mother resides in the country, and hasn’t the constitution for travel.”

“She sounds very delicate,” said Aunt Louise, “for a woman from the lower orders.”

Anne supposed that now she was Leopold’s wife, she would have to hear such comments frequently. “I have never met her, so I have no firsthand knowledge of her health. Only what Leopold relates to me.”

Lady Byton’s brows rose. “It is passing strange that you have not met your husband’s mother. But,” she added, “the whole courtship seemed to take place with extreme haste. No banns read. Everything done by special license, regardless of the expense.” Her kinswoman glanced at Anne’s silver-embroidered stomacher. “Perhaps you have acted quickly in anticipation of an event?”

The very idea nearly made Anne laugh. Her? Indulge in a dalliance? “You forget, cousin, how very little any man might have to gain by compromising me.”

“A hard truth, child,” agreed Aunt Louise. “A baron’s daughter you might be, but the estate loses capital like a cup made of lace.”

Lady Byton clearly felt the need to defend her side of the family. “But Anne has three brothers. Even the most profitable of titles would be hard-pressed in the keeping of all of them.”

“Yes, however,” smiled Aunt Louise with all the warmth of an adder, “I am obliged to note that the two younger boys must truly earn their bread through the military and the Church.”

Leaving Anne with a paltry dowry and even smaller annual income. Soon after her coming-out, she began to realize the futility of a Season as, one by one, young men learned how little she could bring them, and they fell away, petals from a dying blossom.

“If you are not enceinte,” said Lady Byton, pointedly turning from Aunt Louise, “then why the rapidity of the marriage?”

“Because Leopold wished it.” Honestly, Anne did not know how or why the courtship had progressed as fast as it had. It seemed a blur to her now. Within a few meetings, she had found herself engaged and, only weeks after that, married. It was as though she had been playing blindman’s buff: she’d been blindfolded and spun around, then she had grabbed the first person she could. Now she stood with sight and balance restored, the wife of a man she hardly knew.

As if sensing her watching him, Leopold turned, his gaze holding hers. Anne could not look away as he murmured something to the guests and then walked toward her, weaving through the guests. He moved beautifully, with a sleek animal fluidity that suggested barely restrained power. His gaze never left her, as if she were the prize he was determined to claim. The thought both thrilled and terrified.

She saw now how he had risen from his humble beginnings to who he was now: one of the wealthiest nontitled men in England. He permitted nothing to stand in his path.

Anne’s pulse quickened as Leopold came to stand before her. Good Lord, how had she managed to wed this gorgeous stranger? He had none of the well-bred gentleman’s softness, no insipid chin from generations of selective breeding. A bold jaw, high cheekbones, firm mouth that boasted a full lower lip. His morning shave had already lost its battle, and Anne could mark the faint trace where his beard gilded his cheeks and chin. As if the veneer of civility could not last long, and the marauder beneath came to the surface.

At eight and twenty, he was only five years older than she, yet he had the air of a man who had seen and knew the world. She had known ... only this. London. The circles of the polite. What she understood of life outside her conscripted patterns came from books, yet she knew that the world as depicted on the printed page did not reflect true experience.