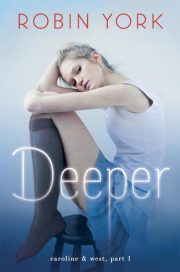 In this New Adult debut by Robin York, a college student is attacked online and must restore her name—and stay clear of a guy who’s wrong for her, but feels so right.
When Caroline Piasecki’s ex-boyfriend posts their sex pictures on the Internet, it destroys her reputation as a nice college girl. Suddenly her once-promising future doesn’t look so bright. Caroline tries to make the pictures disappear, hoping time will bury her shame. Then a guy she barely knows rises to her defense and punches her ex to the ground.
West Leavitt is the last person Caroline needs in her life. Everyone knows he’s shady. Still, Caroline is drawn to his confidence and swagger—even after promising her dad she’ll keep her distance. On late, sleepless nights, Caroline starts wandering into the bakery where West works.
They hang out, they talk, they listen. Though Caroline and West tell each other they’re “just friends,” their feelings intensify until it becomes impossible to pretend. The more complicated her relationship with West gets, the harder Caroline has to struggle to discover what she wants for herself—and the easier it becomes to find the courage she needs to fight back against the people who would judge her.
When all seems lost, sometimes the only place to go is deeper.

Note from the Author

Sometimes I hate the girl I was back then. It’s like how, when you see a horror movie, you can’t help but feel contempt for the virgin who goes for a walk in the woods after midnight. How can she be so stupid? Doesn’t she know she’s about to get gruesomely hacked to death?

She should know. That’s why it’s so hard to watch. Because you want her to know. You want her to defend herself, and you look down on her for not knowing, even though obviously it’s the guy who hacks her up who’s at fault.

The thing is, the movie makes him seem like a force of nature—unstoppable—so the virgin comes off as a total dumb-ass for not checking the forecast to see if it calls for serial murder before she skips off into the night.

These days, if someone sent me a text that said nothing but OMG, I wouldn’t wonder if whatever I was about to find out was going to be bad. I’d only wonder how bad and how long it was going to take me to crawl out of whatever pit I was about to fall in. But in August of my sophomore year at Putnam College, I didn’t worry. I thought maybe Bridget, my best friend and roommate, had gotten distracted before she could finish her train of thought.

I towel-dried my hair and stood up to lob the damp towel into my laundry basket in the closet. Missed. By the time I’d picked it up and put it where it belonged, another message had popped up on my phone, this time with a link.

You need to see this, it said.

And then, immediately after, I’m so sorry.

I clicked the link.

I think part of me knew even then. Because the thing about being a good girl is, you spend your whole life developing a finely honed radar for detecting anything that could potentially cause people to love you less.

The screen filled up with a picture of me, topless, with Nate’s dick in my mouth.

I looked, and I took a deep breath. I closed my eyes.

I could actually feel it—the solid ground of my life, cracking open.

It sounds too drama llama when I put it like that, I know, but I can’t think of another way to describe it. One minute, I was on firm footing—a nineteen-year-old overachieving politics geek, on track to go to law school and take the world by storm—and the next, my feet had lost purchase on the floor. I sagged against the desk. I couldn’t get enough air.

The shock of it didn’t take any time at all to sink in. It sank in immediately, traveling some kind of shortcut path from my eyes to the area of my brain that had made a quiet, private list of the consequences of those photos the second Nate took them.

Everyone will see you, mock you, hate you.

You won’t get into law school.

You’ll never get a Rhodes.

You’ll never be a judge or get elected to office.

Seeing those pictures—I was devastated. Immediately. Because I’d known.

That night when I’d gone down on Nate and he’d lifted his iPhone in the air and aimed it at my head, my good-girl radar was working fine. Bad idea, the radar told me. Such a bad idea. But I overrode it, because Nate was in a mood, and I thought if I went along, it would bring him out of it.

You trust him, I told myself. Nate would never.

But he did. He must have. The website identified me as Caroline Piasecki from Putnam, Iowa, and Nate was the only one who had those pictures. Either he put them there, or he gave them to someone who did.

There were two shots of my face smiling. One duckface from my car that I’d sent him just to be an ass. One of me in my favorite animal-print bra and panties, which I’d taken in the mirror in my high school bedroom, sucking in my stomach and pushing out my chest because I’d wanted to look sexy. I’d wanted so much to be sexy for him.

And the other, even dirtier pictures. The ones I almost couldn’t look at.

At the bottom, my face again, with a cartoon bubble that said, I’m Caroline Piasecki! I’m a frigid bitch who needs to get FUCKED!!!

I couldn’t really believe it.

If someone had asked me ten minutes earlier how I felt about Nate, I would have told them, “Oh, there are no hard feelings.” Three years together, and we’d just grown apart. I guess it was college that did it. By the end of our freshman year, I’d started to feel like maybe Nate and I didn’t have all that much in common. In high school, I’d been dateless until he asked me out—a late bloomer, my dad said. Nate was cute, popular, smart. Flattering to be noticed by a boy like that. But at Putnam, I had started to think maybe there was something missing between him and me. Better chemistry. A deeper connection.

I’d broken up with him before we came back to school. We shared a pizza and drank soda, and I tried to explain my reasoning without hurting his feelings. I thought I had pulled it off pretty well. By the end of dinner, he’d been smiling and agreeable again.

I would have said he was a nice guy. That we were still friends.

Because who expects that?

I sank down into the desk chair and thumbed through the first few screens of comments. Then the next few. Screen after screen.

She has nice tits.

What an ugly slut. I want more vag!

Every word I read—every filthy thing some basement-dwelling Internet creep said about me—I thought, This is my fault.

I never should have let Nate take the pictures. I knew it. I knew it when he took them, I knew it after, I knew it when we broke up and I had this fleeting, urgent impulse to beg him to let me delete every single photo of me off his phone. An impulse I shrugged off because I didn’t want to offend him.

I didn’t want to be rude.

I sat there for a long time, scrolling and reading, wiping tears from my eyes with the back of my free hand. I was panting more than breathing, panicking more than thinking, too disoriented to have anything like a coherent plan.

I think I was mourning the end of something without even knowing it had ended. My youth, maybe. The sunny, perfect part of my life.

It wasn’t until Bridget messaged me again—R u ok?—that I really understood. I thought about how she would come back to the room and she would have seen. She would know, and I would have to face her.

I thought about how it wouldn’t be just Bridget. It would be everybody.

That’s when it hit me that I would never be okay again.

Two and a half weeks after the photos appear online, I have everything under control. Right up until I walk out of Latin and into West Leavitt’s elbow.

I’m walking with my head down, my mind on the upcoming student-senate election. I thought I would run this year to represent my dorm, but now I don’t see how I can. The girl who is running is … Well, I’m trying not to be uncharitable. She’s not my top choice.

My feet are moving out the door and steering me to the right, away from most of the other students. I used to go to the left, but Nate has Macroeconomics in the classroom next to mine, and I don’t want to run into him. I’ve started going right instead and then walking around the outside of the building to head toward the dining hall for lunch.