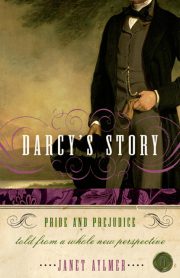 What is it about Fitzwilliam Darcy? Two hundred years after he captivated Elizabeth Bennett, readers still can’t seem to get their fill of him. This title is just the latest in Darcy-inspired Jane Austen «fanfiction.» Aylmer adheres more closely to the original in Darcy’s Story, which retells Pride and Prejudice from Darcy’s point of view. Big chunks of dialogue are lifted straight from Austen, accompanied by Darcy’s own thoughts and perceptions. It’s an interesting idea, but Aylmer’s reverence for the text stands in the way of creating a lively story. There is no attempt to match Austen’s sparkle or to flesh out the period setting, and opportunities to create more drama are missed; for example, Wickham’s attempted abduction of Georgiana, which in another writer’s hands might be a novel in itself, is dealt with in a few matter-of-fact sentences. As a result, this Darcy seems a dull dog. Nevertheless, the book should appeal to ardent Austen fans, especially if they object to too much tinkering.

This book is dedicated to the very many people who have

enjoyed reading Pride and Prejudice since it was first

published in 1813, and especially to

Who always wants to know more.

Jane Austen’s famous novel Pride and Prejudice was first published in 1813, and it has been popular with readers ever since.

In Elizabeth Bennet and Fitzwilliam Darcy, she created two of the best loved characters in romantic fiction. Millions of people over the years have been intrigued by Mr. Darcy, the handsome, proud but enigmatic hero of the novel, and the story of how he meets, misunderstands and finally is united with Elizabeth Bennet.

However, Pride and Prejudice reveals surprisingly little about Darcy and how he is changed from a “haughty, reserved and fastidious” young man to the ardent and humble suitor for the hand of the woman he loves.

Darcy’s Story explores Darcy’s thoughts and actions, and the reasons behind them, and demonstrates that the hero is just as interesting a person as Elizabeth Bennet herself.

Many readers of the novel have agreed with the author when she described Elizabeth Bennet in a letter to her sister Cassandra as being “as delightful a creature as ever appeared in print.” Her independence of mind, and lack of respect for people who take their social position too seriously, have been described as very modern for the time, now nearly two centuries ago, when the book was completed.

Darcy is a more sombre and reserved personality than Elizabeth, very conscious of his social position, and often appearing aloof and distant. In the story, he observes himself that “my temper would perhaps be called resentful.” Described by the author of Pride and Prejudice early in the book as “the proudest, most disagreeable man in the world,” Darcy changes so much that Elizabeth can assure her father that “Indeed he has no improper pride. He is perfectly amiable. You do not know what he really is . . .”

This book explains much more about Darcy’s relationships with his formidable aunt, the forthright Lady Catherine de Bourgh, with his sister, Georgiana, and with his cousin, Colonel Fitzwilliam. We see Elizabeth Bennet, her parents and sisters, and Mr. Bennet’s cousin, the odious but comical curate Mr. Collins, through Darcy’s eyes.

Darcy’s Story reveals how he overcomes the problems and misunderstandings that threaten to separate him from Elizabeth, so that he is able to say to her towards the end of the story “By you I was properly humbled. I came to you without a doubt of my reception. You shewed me how insufficient were all my pretensions to please a woman worthy of being pleased.”

year, but not all his large estate in Derbyshire could

save him from being proud, above his company and

It is a consequence of possessing an income of ten thousand pounds a year that a man may order his life to his own liking, and choose his own society.

The tall and handsome young man surveying his estate from the first floor window had much to be proud of, and few matters to regret. The estate at Pemberley was ten miles round. The gracious prospect from the house overlooked a verdant valley where the stream had been dammed to form a lake in the foreground. The vista over the park extended across to the woods beyond, where the view widened and the slopes on the far side blended with the trees across the hills to each side. Beyond, the High Peak could be seen in the distance. It was a view of which its owner never wearied; and one of many reasons why he was happier in Derbyshire than in any other place.

“You never tire of that view, Darcy?” said Colonel Fitzwilliam.

“No,” he replied, turning to look at his cousin, “but should I?”

“I do not value the landscape of Derbyshire as highly as you do, perhaps, but I dare say that if I had inherited such a handsome house and a fine estate myself, I might have the same preference.”

Darcy smiled and answered, “All you lack is a wealthy wife; make a prudent marriage, and you could be in the same position.”

His cousin paused for a few moments before saying, “I do not need an heiress to a great estate, just someone whose fortune would compensate for my being the younger son, rather than having the prospect of being the next Earl ___. And I myself give some priority to the lady being agreeable, as you should.”

Darcy made no reply to this, but gazed at the prospect over the lake for some time. Then he turned to Fitzwilliam. “Seeing the new growth on the trees at this time of year reminds me that both my mother and later my father died in this month.” He paused, and then added, “I am glad to have your company for a few days, for I find it easy to become melancholy in May, indeed resentful that my mother was taken from me so early.”

Fitzwilliam reflected it was a very great pity that the late Mr. George Darcy had also not lived longer.

“Your parents were very fond of each other,” said Fitzwilliam.

“Yes,” said Darcy, “indeed, a rarity in our level of society, I am sure you would agree?”

“You are thinking of Lady Catherine, our aunt, and Sir Lewis de Bourgh, I suppose?”

“They are but one example,” said his cousin.

“But do not forget,” said Fitzwilliam, “that your mother was very young at the time of her marriage, so that her disposition was not set, whereas our aunt was not only the elder sister, but was two and thirty when she wed. In any case, her marriage was not so much unhappy as more formal. And you should recall that Sir Lewis was an elderly widower when they met, and died only three years later, when his daughter was only two years old. At least his will left Lady Catherine a considerable fortune, together with a very handsome house and with the estate at Rosings in trust for our cousin Anne.”

“But if you are trying to suggest,” said Darcy testily, “that a gentleman whom our aunt had met taking the waters at Bath, and who was very nearly a contemporary of our grandfather, could have had a really happy marriage with someone of such strong opinions as Lady Catherine, I do not believe you!”

Fitzwilliam reflected to himself that Lady Catherine could more properly be described as arrogant, with an ill concealed contempt for her inferiors in society. Indeed, he knew that Darcy himself could appear to be disdainful in company. Although he had inherited his father’s shy, reserved disposition and dislike of the social round in town, in many other respects his cousin strongly resembled his mother, having a strong sense of his social position and being jealous of his ancestry and the possession of his great estate.

“Perhaps it would have been as useful if Sir Lewis could have bequeathed Anne better health rather than so large a fortune, for she was a sickly child from the beginning,” said Fitzwilliam. “But you must excuse me, for I must make preparations for when we leave tomorrow.”

Darcy returned to sit at the table where he had been writing a letter to Georgiana.

His sister, more than ten years his junior, had been left on their father’s death five years earlier to the guardianship of himself and his cousin Fitzwilliam. Although she was happiest when in Derbyshire, since their bereavement Georgiana had lived mainly in London, so that she might have access to the best of tutors, and be instructed in music and dancing prior to her being presented at court.

She was now some fifteen years of age, and had lately left school. Darcy had recently employed a Mrs. Younge as his sister’s companion, who had been recommended by an acquaintance of his uncle, the Earl ___, for whom she had occupied a similar post. At the suggestion of Mrs. Younge, who knew the place well, she and Georgiana were shortly to travel from Darcy’s house in London to Ramsgate, to take the sea air for a few weeks.

They were to break their journey at Rosings, the home of Lady Catherine de Bourgh and her daughter Anne, who was several years’ younger than Darcy. He himself had recently spent a few days with Fitzwilliam there on his annual visit, but with little enjoyment from the company of his aunt and cousin.

On Lady Catherine’s insistence, Georgiana and Mrs. Younge were to be accompanied on their journey through Kent by a pair of manservants, in addition to the coachman and his assistant, as outriders alongside the chaise.

He took up the letter that he had most recently received from his sister.

I know, my dear brother, that you wish us to visit my aunt on our journey. I confess that lately I find her manner rather severe for my taste, and her strictures on my accomplishments compared to those of Anne rather dispiriting.

His recollection was that, despite the little time she spent in society, their cousin’s health had not enabled her to acquire many accomplishments, save a very proper disdain for inferior companions and a rather constant concern for her own indispositions.