Главная / Исторические любовные романы / Darcy and Fitzwilliam: A Tale of a Gentleman and an Officer 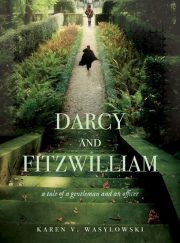 Karen Wasylowski - Darcy and Fitzwilliam: A Tale of a Gentleman and an Officer краткое содержание

A gentleman in love cannot survive without his best friend…
Fitzwilliam Darcy and Colonel Fitzwilliam couldn’t be more different, and that goes for the way each one woos and pursues the woman of his dreams. Darcy is quiet and reserved, careful and dutiful, and his qualms and hesitations are going to torpedo his courtship of Elizabeth. His affable and vivacious cousin, Colonel Fitzwilliam is a military hero whose devil-may-care personality hides the torments within, until he finds himself in a passionate, whirlwind affair with a beautiful widow who won’t hear of his honorable intentions.
Cousins, best friends, and sparring partners, Darcy and Fitzwilliam have always been there for each other. So it’s no surprise when the only one who can help Darcy fix his botched marriage proposals is Fitzwilliam, and the only one who can pull Fitzwilliam out of an increasingly dangerous entanglement is Darcy…

Darcy and Fitzwilliam: A Tale of a Gentleman and an Officer - читать онлайн бесплатно полную версию (весь текст целиком)

Darcy and Fitzwilliam: A Tale of a Gentleman and an Officer - читать книгу онлайн бесплатно, автор Karen Wasylowski

A Tale of a Gentleman and an Officer

This book is dedicated to

the love of my life,

my best friend and fiercest champion,

“I assure you, I feel it exceedingly,” said Lady Catherine; “I believe nobody feels the loss of friends so much as I do. But I am particularly attached to these young men; and know them to be so much attached to me!—They were excessively sorry to go! But so they always are. The dear Colonel rallied his spirits tolerably till just at last; but Darcy seemed to feel it most acutely, more I think than last year. His attachment to Rosings, certainly increases.”

The two men stared off in different directions, making their awkward final good-byes to each other. They were, in appearance and comportment, as dissimilar as two men could be.

Though both were exceedingly tall, Fitzwilliam Darcy, the younger by nearly two years and a gentleman, was dark and handsome, elegantly dressed in the finest coat and neck cloth, breeches, and boots. His air was one of a man of elegance and breeding, his demeanor of a man three times his age: heavy, solemn, serious, and levelheaded. He was also shy to the point of seemingly rude indifference. The owner of one of the largest and wealthiest estates in England, inherited by him at the grand old age of twenty-one and then doubled, he had achieved his great success at the expense of his youth.

The elder of the two men, Colonel Richard Fitzwilliam, was bulkier, barrel-chested, and slightly rougher looking, dressed in his unkempt colonel’s uniform. An uninhibited joy of life exuded from him. He was like a large, gangly puppy, a happy, wild spirit trapped within a respectable soldier’s body. What he lacked in physical beauty he more than made up for in character, the magnetic center of anywhere he went and of everyone he knew. A second son, he had bought his commission into the army near the beginnings of the crusade to rid Europe of Napoleon. The past nine years of that devastating war had made him snatch life and laughter wildly, wherever and whenever he could.

“Darcy, I cannot tell you how badly I feel about this business with Miss Bennet. If you had but told me of the depth of your feeling for her, I would have backed off. I would not have flirted half so much, and I wouldn’t have wagged my tongue so carelessly.” Feeling a bit guilty now for his actions Fitzwilliam leaned against the bureau in his cousin’s room watching as that man packed the remainder of his clothes. It was evident that his dearest friend and cousin was devastated over Miss Elizabeth Bennet’s refusal of his marriage proposal. Worse yet for the colonel’s conscience, her refusal had been in part based on his own gossipy revelations regarding the destruction of her beloved sister’s romance through Darcy’s intervention.

Darcy looked out through his bedroom window, across his aunt Catherine’s immense estate, Rosings Park, his intense gaze cast in the direction of the vicarage where Miss Bennet was visiting; reluctantly he returned his attention to his packing. Her emotional reaction haunted his thoughts. In her judgment, his very character was wanting to such a degree that she could never marry him, and worse, he was no gentleman. Her words stung his pride and his honor; her rejection caused him to question values he had regarded as inviolate.

“It’s done and over, Fitz.” The solemn young man sighed as he snapped his valise shut and then dragged it from the bed. “I’m sure I shall survive.” But his eyes were hooded and hollow, his shoulders drooping a little too low for the light weight of his bag. “This was a bleak Easter visit, though, I must confess.”

“Let me go over there one more time and speak with her; she may have returned by now. I can’t help but think that if you were willing to confide in her about Georgiana and Wickham, she must mean a great deal to you.”

“Leave it, Richard. It just wasn’t meant to be.” Darcy placed his bag on the floor and checked his pocket watch. “Besides, I think you have more important worries than my love life at the moment.” He looked at his cousin, his hands clasped behind him, his weight casually resting on his back leg.

The two were like brothers, closer really, and had been each other’s best friend and arch rival their entire lives. One was returning to his solitary existence in the country, the other to war.

“You’re going straight to it, then?” Darcy searched his cousin’s eyes, frightened for him, amazed at the man’s calm. Nine years of campaigns, and he was still alive with all his limbs, a monumental accomplishment in this never-ending battle with France.

“Yes, I go immediately to join my regiment in Spain, but I believe the decider will be farther north. I’ll see Wellington upon my return, and then I’ll know better what’s to come.” He smiled brightly at his cousin, but the cloud of an unknown future for both men had already begun to overshadow their eyes.

“How do you get through it, Fitz?” Darcy asked as he stepped forward to take Fitzwilliam’s hand to shake.

“Prodigious amounts of liquor, brat.” Fitzwilliam pulled his cousin to him and, ignoring any reticence he might encounter, proceeded to give him a great manly hug, and although Darcy was not normally a demonstrative man, he returned the hug unashamedly, steeling himself once again to the possibility that his cousin might not return from this fight.

Pushing away, suddenly somewhat embarrassed by his emotions, he grinned. “Oh, that reminds me. Aunt Catherine told me to discreetly remonstrate with you on exactly that point. Seems she feels you drink far too much, and I’m to explain the evils of overindulgence to you.”

Fitzwilliam let out a loud hoot of laughter. “Poor old soul would faint if she knew the half of what I do in excess.”

“Well, consider yourself told.” Darcy smiled warmly at him. “But for my part, whatever gets you through this safely and in one piece, I say go ahead.”

The servants came for their luggage as the two men headed down the staircase, waiting a moment as they watched the odious clergyman, Mr. Collins, run from the house, his face contorted in a silent scream, his daily interview with their aunt Catherine evidently over.

“Actually, Darcy, I have a good feeling about you and Miss Bennet. I think she and you will eventually suit perfectly.” Fitzwilliam chuckled at his cousin’s groan.

“You just will not let this lie, will you?” Darcy said, his voice showing his exasperation.

“Well, no. Not now that I have the satisfaction of knowing it will annoy you so much.” Fitzwilliam grinned mischievously. “Surely after all we’ve been through together, you know me by now.”

Darcy’s shoulder was leaning on the closed door, his hand grasping the doorknob to their aunt’s sitting room, as they hesitated for a moment to rally their courage for one last bout with the Grande Dame of their family before they left.

“In that case, I’m afraid I will have to tell Catherine about your sudden and sad addiction to opium.”

“Why, you lying bastard. You know I’d never touch that horrid stuff; she’ll attack me like a mad ferret!”

Darcy smiled wickedly as he opened the door, calling out, “Aunt Catherine, I have shocking news for you!”

Fitzwilliam slapped the back of his little cousin’s head as he entered the room behind him.

His years are young, but his experience old;

His head unmellow’d, but his judgment ripe;

And in a word (for far behind his worth)

Come all the praise that I now bestow,

He is complete in feature and mind,

With all good grace to grace

It was now a full two months after their wedding, and a sunny, crisp winter morning to boot. The newly wedded Elizabeth Darcy, née Bennet, was making a concerted effort to look out the window at the beautiful winter expanse below and not turn her gaze immediately upon waking to her magnificent husband as he slept, admiring his strong jaw line and his long eyelashes. He was, to her eyes, simply put, beautiful.

She would stare at him all day if he had not whispered to her during a performance of “The Magic Flute” that her gazes were unsettling to him and that she really must stop. But then, of course, his own eyes had been dark with longing as he squeezed her hand and kissed it during his reprimand, so how serious could he really be?

She decided to compromise and just gaze at him when he couldn’t possibly be aware, like in the morning, when she always awoke before him, or perhaps when she watched him ride his horse from the stables, or maybe at breakfast as he read the daily reports from his estate manager.