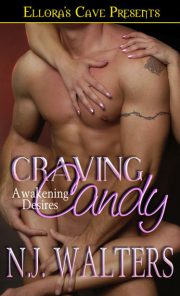 Candy Logan loves her job as a publicist for TK Publishing, but her newest client is causing her problems. Determined to meet the elusive Lucas Squires and get him to agree to publicize his upcoming book, she crashes a party that he is giving in hopes of cornering him.
Lucas wishes he’d never let his friend talk him into writing a cookbook. He has his hands full opening a new location of his café, Coffee Breaks. He forgets all about his business problems, however, when a woman straight out of his dreams walks into his party. He knows he can’t let her leave without finding out who she is.
Sparks fly between Candy and Lucas from the first moment they lay eyes on each other. The sexual attraction is immediate and consuming, but a case of mistaken identity gets their relationship off to a rocky start. Just when things start to smooth out between them, issues from each of their pasts threaten their budding relationship.

This book is dedicated to my wonderful husband, whose support and encouragement still continues to grow after all these years.

Thanks to all the readers who have written to tell me how much they have loved this series and wanted to make sure I didn’t plan to leave Lucas out.

And thank you to Mary. As always, I appreciate your hard work and your encouragement.

It was the screams that woke him.

He’d come home from working a double shift at the grocery store, totally exhausted, and had fallen into bed immediately. For once, the house had been blessedly silent. The money was starting to accumulate in his bank account and in less than a month he would be moving out of the cramped, cheap, squalid apartment he’d called home his entire life and into his own place. His life was about to begin.

And then the screaming had started.

He thought about pulling the pillow over his head and pretending he couldn’t hear the male voice yelling obscenities in the other room, but he knew that was impossible. He’d never be able to rest until he knew his mom was okay.

Sighing, he rolled out of bed, clad only in his boxer shorts. The floor was cold against his feet, but he didn’t take the time to pull on socks. Sounded like the old man was really on a bender tonight. He scrubbed his hand over his face, wishing he’d taken a shower and shaved before he’d fallen into bed earlier.

He paused at the door and listened. Maybe the old man would crash in his easy chair and drink himself into a stupor. That’s what he did most nights. Only one more month of this crap, he consoled himself.

“You stupid bitch!” The sound of glass smashing was followed quickly by a woman’s cry of pain.

Yanking the bedroom door open, he pounded down the hall just in time to see his mother crash against the wall, cowering in fear as her enraged husband loomed above her. She clutched her right hand to her chest and, from the way she held it, he suspected that it was sprained or broken. It wouldn’t be the first time. Blood dripped from her nose as she turned her face away.

The world seemed to shift, almost as if it were in slow motion. This scene had played itself out over and over in this household for as long as he could remember. It was always the same. The old man would beat his mother or him until he got tired or some neighbor called the cops, complaining about the noise. The cops would come and his mother would tell the officers that nothing was wrong.

But tonight, he’d had enough. “Stop it!” He was across the room before he’d really thought about it and grabbed his father’s arm just as he was about to strike his mother again. He was tall but scrawny. Certainly no match for his father, who was heavily muscled— a man in his prime.

He sensed his father’s disbelief as the older man jerked around, and the fist that had been about to descend on his mother now swung in his direction. Rearing back, he barely avoided being hit and felt the whoosh of air against his cheek. As he stood there facing his father, a deep calm settled upon him. His mother sank down to the floor, whimpering in pain, but her eyes never left them as they squared off, father against son.

“Stay out of this, boy. It ain’t your business.” His father’s voice was rough from too many years of smoking and hard drinking. A dull red suffused his face as he flexed his huge hands by his sides.

“Leave her be.” He swallowed hard, his mouth dry as he dared to defy his father. “You telling me what to do, boy?” Utter disbelief filled the older man’s voice. And why wouldn’t it? The thought left a bitter taste in his mouth. He’d rarely stood up to his father and had always been beaten down when he had. But he’d just turned eighteen yesterday. He was a man now and a man protected those weaker than himself. At least, a good man did.

He took a deep breath, knowing he was inviting a beating, but there was no turning back. It was as if his whole life had led him to this place in time, to this showdown with his father. “Yes, I am. I’m telling you to leave my mother alone.”

He could see the bead of sweat as it dripped down his father’s face. The old man looked more like fifty than thirty-eight. Hard living and just plain meanness had left their mark etched on his once-handsome face. He wore faded blue jeans, work boots and a white wifebeater, which showed off the tattoos that spanned the length of both massive arms from wrist to shoulder. His face was lined and worn, fixed in a perpetual sneer, and his cold, blue eyes glared at his only son. “This is between me and my wife. Stay the fuck out of it or get the hell out of my house.”

As quick as a rattler, his father turned on his mother and kicked her in the ribs with his steel-toed boots. “You stay out of this. This is all your fault.”

His mother’s cry of pain awakened some sleeping beast within him. A red haze filled his vision as he let out a primal yell and launched himself at his father. They fell to the floor in a flurry of arms and legs, each trying to hit the other. With rage came strength and he rolled until his father was beneath him. Drawing back his arm, he punched his father in the face.

Blood spurted from his father’s mouth, the crimson stream spraying across the white wifebeater. His father bucked beneath him, but he pushed him down and hit him again and again and again, releasing a lifetime of pain and anger against his father’s face. The sickening, wet slap of flesh meeting flesh was lost beneath the rush of his own heartbeat, pounding in his ears.

His father ceased to struggle, lying limp against the faded blue linoleum that covered the living room floor. He could hear his mother crying and yelling, but it seemed to be coming from a great distance.

He stared down at his hands, hardly able to believe they were his own. Fisted, they were covered in blood. He reared back, half falling, half stumbling off his father’s still body. His mother’s weeping drew his attention and he turned to her.

Her blonde hair was matted with blood and her face was ghostly white as she stared at him. “What have you done?” She pushed herself up off the floor and staggered to her feet. Her red-rimmed eyes were wide as she glanced from her husband to her son. “Quick, honey, you’ve got to get dressed and get away before he comes to.” She glanced at her husband as she skirted around his body, as if she expected him to jump up and start hitting her again. “He’ll kill you if you don’t get away. I’ve got some money you can have.”

“Mom.” He didn’t know what else to say. All he wanted to do was bury his face in her lap and have her stroke his hair and tell him everything was going to be all right, like she used to do when he was little. But nothing was right and he was very afraid that it would never be right again.

“Shh, honey.” Her gentle hands shook as she pushed his hair out of his eyes. “This is all my fault. I should have left him years ago. Should have taken you away from here.” Resignation filled her timeworn face and, for a brief moment, he could see a flash of determination in her eyes. She tugged on his hand, making him stand. “It’s not too late for you.”

The old man groaned just as someone pounded on the front door. “Police. Open the door.”

His mother tried to push him down the hallway, whispering at him to hurry to the bathroom and wash the blood off his hands and chest. He loved her more in that moment than he ever had in his entire life. He could see by the look in her eyes that she planned to take the blame for what he’d done and he couldn’t allow that. A man took responsibility for his actions.

Leaning down, he cupped her battered face in her hands and gently kissed her forehead. “Everything will be okay.” At least, he prayed it would be as he slowly walked to the front door and turned the locks.

The next few hours were a blur as he was arrested and charged with assault. It was strange, the things he remembered. The red lights flashing in the dark of the night, casting ghostly shadows on their worn brick building in the slums of the city they called home. The feel of the rain against his skin as he was placed in the backseat of the police car. The sight of his mother’s face, filled with tears and grief. And later, the sound of the prison bars slamming shut behind him, the coldness of the cell and the faraway echo of voices. But it was the sense of desperation he remembered most. It permeated the very air and he sucked it into his lungs with every breath he took.

He kept telling himself over and over that everything would be fine. His mother came to visit often, but his father was out for vengeance. Playing the victim, the old man lied on the stand and smiled when they sentenced his son to five years in prison. They wanted to make an example of him for such a vicious assault against a parent. He was eighteen, an adult now, and would serve his term in prison.

His mother cried and screamed as his father all but dragged her from the courtroom. He knew the old man would hurt her, especially since he was no longer there to help protect her. He fought the guards, begging and pleading with them to help his mother. His father’s smile was cruel as he waved goodbye to his son.

It was the last time he’d ever see her alive. A prison guard came by his cell less than a month later to tell him his mother was dead.

He covered his ears with his hands, but her screams echoed in his head. The agony vibrated in his very soul. It was the screams that woke him.