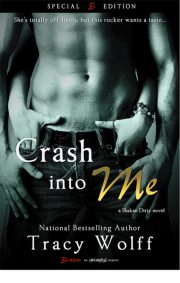 Jamison Matthews has lusted after Ryder Montgomery since she was a preteen. But now that Ryder and her brother’s band, Shaken Dirty, has made it huge, she’s just one of many pining for the brooding lead singer. Too bad Ryder still sees her as a little sister. Not that it matters. Her brother would never allow it, and the last thing Jamison wants is to be another notch on a rock star’s bed post. Even if it’s Ryder’s.
Ryder doesn’t deserve happiness. After his fame destroyed his last girlfriend, he swore he’d never fall in love again. So when Jamison, the girl he’s been in danger of loving for years, joins the band on the road, he’ll do anything to deny the sparks between them—even after one hot night together. But Jamison is determined to show Ryder that he’s worthy of love—her love—and that she’s all grown up and ready to play.

His voice roared over her. Loud, sexy, and so richly decadent that she felt her limbs going loose with excitement. With arousal. With need. Jamison Matthews knew she wasn’t the only woman in the audience to feel that way while listening to Ryder Montgomery sing—his deep, raspy baritone was one long mind-and-body-fuck—but that didn’t make it any less powerful. Neither did the fact that she’d been listening to it for ten long years—ever since she was a thirteen-year-old kid with a crush on the lead singer of her brother’s band.

And some things did. Shaken Dirty had come a long way from the teenage garage band they’d once been. The tens of thousands of screaming fans currently filling this very amphitheater attested to that. As did the bras and panties that haphazardly littered the stage. Her brother, Jared, had picked up a sheer red thong and draped it over the neck of his guitar, while Micah’s base was decorated with lacy purple boy shorts. Totally disgusting if she let herself dwell on where those panties had been just a short time before.

But she wasn’t going to do that, wasn’t going to let anything mar her enjoyment of the show. Being here, watching her brother play with the others in the middle of this gigantic venue, co-headlining the Rock On tour with some of the hottest bands around, was a dream come true. She wouldn’t waste a second of it.

The song ended and the crowd went nuts, screaming and whistling, chanting and shouting. Begging for more. Jamison went nuts right along with them, didn’t even mind when the surging fans pressed her closer and closer to the barricade that kept eager devotees off the stage. That was her big brother up on that stage. Her big brother and Ryder and Wyatt and Quinn and Micah. They’d come a long way since Jared had let her listen in while they’d practiced in the garage, and she couldn’t be more proud. After all they’d been through, they’d finally made it.

For a second, panic threatened at the disaster her life had become practically overnight. It wasn’t the accident that hadn’t been her fault but had left her with a totaled car anyway. A car that had been worth only three thousand dollars, which gave her pretty much no chance of buying a reliable replacement for the amount the insurance would pony up.

Nor was it that her douchebag boyfriend had dumped her while she was down. Sure, she’d thought she was in love with Charles, but in retrospect she was willing to admit that there had been some major red flags in their relationship. Chief among them was his inability to keep his zipper up around other women.

Not even the fact that the closest friend she’d made since moving to San Diego had been sleeping with her douchebag of a boyfriend had made her feel this tied up in knots. She’d thought Lisa was pretty cool, but her friend—make that her ex-friend—had never made a secret of her freewheeling morals.

But losing her job this morning—a job she’d loved and had invested so much of her time in—had been the piece de resistance on top of the shit-pile her life had recently become. Especially considering she’d uprooted her whole life to move to San Diego less than six months before just so she could take the stupid job. It was the first step on the ten-year plan she’d had for her life, a plan that now lay in utter ruins around her.

She wanted to crawl back into bed and forget the last forty-eight hours had ever happened. Or, barring that, rewind the clock so that she could have seen coming some of the crap that had been heaped on her. Not all of it, obviously, but it might have been nice to know the restaurant where she’d landed her first big job out of cooking school was having to close before she’d bought, and worn, the most gorgeous pair of Louboutins she’d ever seen. Or before Charles had forced her to listen to his diatribe of all the reasons he’d cheated on her, reasons that were, of course, completely her fault.

She’d called bullshit on him, but still. Standing here with all these women, so many of whom were skinnier and prettier than her, only gave his words credence in her head. Not to mention the last thing she should be doing right now was screaming along with a bunch of Shaken Dirty fans while fantasizing about the lead singer of her brother’s band.

Onstage, the band launched into “Awake,” one of the power ballads that had made them famous. The crowd screamed their approval and so did she. Totally not her typical modus operandi, but she couldn’t help it. Something about listening to Ryder croonthe darkly haunting lyrics had her knees trembling and her heart beating much too quickly. If she closed her eyes, she could do what all the other women in the audience were doing and pretend that he was singing straight to her.

So much better than remembering he’d written these heartfelt words for another woman. For Carrie, who had killed herself and broken his heart so many years before. Her own heart ached at the thought. For him. Always for him. At twenty-nine, Ryder had already been through more darkness and despair than any one person should have to handle.

“Awake” finally came to a close, the last note hanging in the air for long, tension-fueled seconds. Then the band fell silent and the audience did the same, as if they were all holding their breaths. Ryder lowered his guitar, shuffled and stamped his feet once, twice. It was a familiar gesture, one years of experience had taught her was his way of shaking off excess emotion. Again her heart twisted. It devastated her that more than ten years after the fact he was still eaten up by what had happened. Still determined to bury it under a bunch of layers that not only insulated him from his pain but also hid the real Ryder so deep inside the public Ryder that she wondered sometimes if he even existed anymore. Or if the boy who had held her while she cried, who had let her whisper her pre-adolescent fears without ever making fun of her, had disappeared forever.

She searched for him, in that one endless moment.

Looked for him in the obsidian eyes that arrowed to the heart of the crowd even as they barricaded his own emotions.

Combed through her own memories and expectations in an effort to see Ryder as he really was instead of how he portrayed himself.

And when his eyes—his crazy, beautiful eyes—met hers, she found him. Seconds passed, long, intense seconds where she lost the ability to hear or breathe or even think. All she could do was look into Ryder’s eyes, at the feral heat boiling up and out of them, and want.

She smiled at him, waved. He snarled back. But it wasn’t a leave-me-alone snarl. No, definitely not. It was his I-want-to-fuck-you-up-against-a-wall snarl—she knew it well, had seen it directed at a lot of women through the years—and her knees gave way when she realized that this time, finally, it was directed at her. It didn’t matter that there was no sign of recognition in his eyes, no knowledge that the woman he was looking at like that was actually her. Jamison. For one moment he wanted her the way she’d always wanted him.

It was more than enough.

And then Jared thrust a hand in the air and the moment was gone. The silence shattered, the crowd exploding in catcalls and screams and whistles, pleas for more mingling with pledges of undying love. It was awe-inspiring, yet humbling, to witness. She still remembered the guys as lanky teenagers beating out a rhythm in her garage. As struggling musicians driving up and down the coast to play at dives that barely paid. As an opening act to bands much bigger and better than they were.

She watched as Ryder flirted with the crowd a little in true lead singer fashion. Women screamed in response, while men shouted and cheered. And when Ryder walked to the edge of the stage and switched out the acoustic guitar for his electric one, Jamison felt herself swoon right along with the others. She couldn’t help it. This had always been her favorite part of the show and when they’d gotten so close to the end of their set without it making an appearance, she’d worried they’d cut it.

Jared stepped forward as well, told the crowd to “Make some fucking noise!”

Much feet-stomping and clapping ensued, and Jamison was right there with the rest of the audience, screaming herself hoarse as Ryder and her brother teased them into a frenzy. And then, just when it felt like the amphitheater was going to explode from excitement, they dueled.

It was the most beautiful, the most perfect, thing she had ever seen. Her brother was in his element, huge smile on his face, fingers flying over the guitar strings so fast at times that they seemed to blur. On and on he played, his talent as mind-blowing as his grin was infectious, until finally he reached a shattering crescendo.

The last notes of his solo were still ringing through the amphitheater when he stepped back and Ryder took over.

Though he was the band’s front man, Ryder was almost as good a guitarist as her brother. But where Jared was totally engaging and fun to watch, listening to Ryder play was like opening a conduit straight to the rawest part of the human soul. It was amazing and terrifying in equal measures, and so spellbinding that he caught an audience of thirty thousand in his web and held them there, suspended, as his guitar wailed in agonized ecstasy.

Suddenly Ryder hit a particularly complicated series of chords and the fans behind her shouted their approval. He grinned—a dark, haunting twist of his lips that came and went so quickly that she almost thought she’d imagined it. Except she was pressed up against the stage now, so close that she could see his eyes. Deep and dark though they were, for a minute, just a minute she’d glimpsed a flash of pure enjoyment. And then she lost it as he tilted his head forward so that his chin-length black hair fell over his face, obscuring him for long seconds from the prying eyes of the crowd.