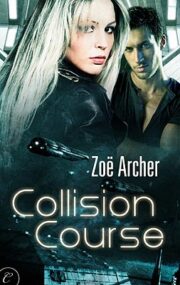 In a galaxy torn apart by war…
Mara Skiren is a scavenger, a black-market dealer. Blackmailed into helping Commander Kell Frayne infiltrate a treacherous corner of the galaxy, Mara learns that her biggest danger is from her sexy, by-the-book partner. She’s a loner with more than a few battle scars on her heart, but something about Commander Frayne stirs up her long-buried need for an intimate connection.
An ace pilot for the elite Black Wraith Squadron, Kell’s mission is to rescue a lost pilot and ship. Unable to deny his attraction to the beautiful, rebellious Mara, he decides bedding her would cool his ardor. But one taste is not nearly enough, and he finds himself sharing more of his real self with her than he has with anyone.
With deadly criminals on their heels and an increasingly dangerous assignment to complete, he’s starting to wonder…if they survived, could he let her go? And will Mara want to stay?

Mara Skiren knew there was a venerable expression that perfectly captured her current situation: she was screwed. Completely, unreservedly screwed.

Walking down the corridor toward her ship, she should have been headed toward freedom.

Instead, she was being forced into a mission she didn’t want.

The ranking captain briefed Mara as they headed to the docking bay. His words were clipped,

efficient, and combined with his standard-issue severe haircut and his crisp gray 8th Wing uniform, made him exactly the type of person she avoided as much as possible. As they walked, they passed more people in 8th Wing uniforms, all of them staring at Mara with undisguised curiosity. Guess it wasn’t every day that scavenging smugglers like her were allowed to roam free through the station.

“Any questions?” the captain asked.

He frowned at her. “Clarify.”

“You’ve got dozens, maybe hundreds, of good pilots. All of them perfectly happy to take on this mission. Why do you need me to carry it out?”

He stopped walking, then glanced around and lowered his voice. “Our missing pilot and her ship disappeared inside the Smoke Quadrant.”

Mara couldn’t hide her wry smile. “The 8th Wing doesn’t know their ass from their nose inside the Smoke.”

“We’re not familiar with the region, no.” The captain pressed his lips together tightly. “Between the natural barriers and the information network in place, the 8th Wing lacks sufficient intel to adequately appraise the situation.”

“Meaning, you aren’t smugglers, scavengers or pirates, so the whole place is a giant question mark.” She chuckled. “That’s exactly why us scum like it there. Both the 8th Wing and PRAXIS leave us to drink, brawl and murder in peace.”

At the mention of the 8th Wing’s old enemy, the captain’s mouth tightened. “Even if the PRAXIS Group cannot breach that quadrant, either, it is vitally important that we locate and retrieve our pilot and her ship.” He consulted the readout on his digitablet. “Lieutenant Jur’s ship was damaged in an ambush. Her last communication indicated she and her ship were being overrun by scavengers. Her ship’s tracking device stopped functioning within the Smoke Quadrant. We can only assume she has been taken, but by whom and precisely where in the Smoke Quadrant is unknown.”

Mara processed all of this information. It made sense to assume that if the lieutenant and her ship had been seized by scavengers, they would be taken to the Smoke. It was the best place for dealing in black market goods. In the Smoke, no opportunity for profit was ever wasted. Mara never took on human cargo, but an 8th Wing fighter ship would definitely tempt her.

“This rescue mission must be conducted in secrecy,” the captain added.

“If the 8th Wing tries to move in force,” Mara deduced, “all signs of the good lieutenant will vanish.”

The captain nodded. He resumed walking. “At best, Lieutenant Jur will disappear and we won’t ever find her. At worst, she’ll be killed.”

That’s why they needed Mara. She knew the Smoke Quadrant better than anyone. That didn’t reflect well on her character. Fortunately, she didn’t give a damn.

“Your objective,” continued the captain, “will be to infiltrate the quadrant, then find Lieutenant Jur and her ship. You have already been apprised of the repercussions if you refuse to cooperate.”

“I’ve been apprised.” She’d be tried as an enemy combatant and most likely thrown onto a prison scow. Her beloved scavenge ship would be impounded, broken up and used for scrap. “It’s bullshit, you know. I’m not your enemy and I am definitely not a combatant.” She went out of her way to avoid a fight, any fight. She’d had enough of that in her other life.

“It would not be difficult for our courts to prove otherwise. You sell scavenged parts to the PRAXIS Group.”

“I sell scavenged parts to the 8th Wing too,” Mara shot back. “I sell to anybody, so long as they’ve got the credits.”

“Semantics. A guilty verdict can and will be found if you don’t cooperate.”

She fought to keep herself from snarling. Yes, she was truly screwed. She hated being forced to do anything. And she hated going into the Smoke as an operative of the 8th Wing. The Smoke was her place, damn it—rough, wild and unprincipled. Everything the 8th Wing wasn’t.

But she didn’t have a choice. Choice had been taken from her when the 8th Wing had found her in that Kauri bar and brought her in to their station on some flimsy tariff pretext.

“I’ll want an exoneration in writing.” She stepped closer to him, her chin jutted forward aggressively.

“Once you, Lieutenant Jur and her ship return, you will have an amnesty certificate inscribed in your ship’s spec imprint.”

That was something, at least. She just wanted to lead a nice, quiet life of scavenging and smuggling.

She and the captain reached the bay. After he punched in his security code, the doors slid open and Mara let out a little sigh of relief. There she was. Her baby. The Arcadia.

She wasn’t the prettiest ship—Mara had repaired her too many times, and the old girl showed her age now. But Mara was older too. Older didn’t mean less useful, less capable. The Arcadia was still sleek, still fast, and could still tow payloads ten times her size, and that’s all that truly mattered. The ship belonged to Mara, and Mara alone, and for simply that reason, she loved the scruffy thing.

“You didn’t do anything to her?” she demanded. “Tear her open or put a tracking pod on her?”

“Your ship is exactly as it was when you last saw it.”

Mara planned to run a scan later, just to be sure. She’d configured some black market tech so it could detect even the most hidden tracking devices. Her hatred of being monitored or tethered—like a Pabu dog on a leash—was another relic of her old life.

She began to walk toward the Arcadia, drawn by the irresistible pull of everything the ship represented. Her steps faltered and then stopped when a man walked around from the other side of the ship.

Sweet meteor candy. Mara had been back and forth through the galaxy more times than most people changed their socks. She’d seen everything from the Fire Caverns on Tawhiri Rho to the Ice Ghosts haunting the cliffs of Janxa. She’d been to every inhabitable planet and done business with their natives. Seen species both hideous and beautiful, miserable and sublime. Nothing’s appearance shocked her.

This man amazed her.

No way around it. He was one of the most physically attractive men she had ever seen, including the famed Halu pleasure slaves bred specifically to be the most aesthetically appealing creatures in the galaxy. Broad shoulders, powerful arms, long legs. His immaculate 8th Wing uniform brought into gorgeous display his lean, tight muscles. A plasma pistol was strapped to his thigh. Even simply walking, his movements radiated power and strength. His body was hard, lethal. A warrior, this one.

And his face. Far too rough to be considered handsome. He had the face of a man who had lived tough—and nothing appealed to Mara more. The clean delineation of his jaw contrasted the curves of his mouth. Thick, dark hair cut very short. Dark brows, dark eyes. Dark all over. And gazing intently at her as he strode toward her.

Her life danced along the edges of respectability, often straying into outright dishonesty. When she took a man to her bed, she picked him specifically because he was equally shady, the kind of man who wanted nothing more complicated than a night of physical pleasure before they went their separate, nefarious ways. Then she could go back to her happy solitude until her body’s demands for release had her searching out a new, very temporary partner.

She avoided men in uniform. Too much stability, too many expectations of reliability.

Looking at this man in uniform, Mara began to seriously reconsider her policy.

Whoever he was, he stopped just a few feet from her, and the two of them stared at each other as if the captain, the bay, the station and the entire galaxy didn’t exist. The heat of his gaze went through her like a solar flare, lighting up parts of her that had been cold for eons. Dimly, she was aware of the commander’s bars on his uniform’s shoulders, and beneath that, the patch indicating he was a member of the 8th Wing’s elite flying squadron. Up close she saw the tiny crescent of a scar at the corner of his eyebrow, and she suddenly wanted to lick it.

Maybe when she returned from her mission, she would find this man. They could share a bottle of Raijin whiskey and lock themselves in his quarters for a week. With that kind of incentive, she would be sure the mission went well, and quickly.

The forgotten captain cleared his throat. “Mara Skiren, this is Commander Kell Frayne, of the 8th’s Black Wraith Squadron.”

Automatically, she stuck out her hand. She was a scavenger, but she still had manners.

The commander’s warm hand enfolded hers. At his touch, breathing became suddenly difficult.

She saw his pupils widen, heard his quick inhalation, and knew her touch affected him too.

“Commander Frayne,” she said. She smiled. “I’ll definitely remember your name for my return trip to the station.”

The commander pulled away and frowned. He turned to the captain. “You didn’t tell her, sir.” His voice was gravelly, deep.