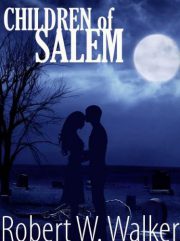 INTRIGUE, SUSPENSE, AND ROMANCE IN THE TIME OF THE SALEM WITCH TRIALS A spy working for religious organizations, Jere Wakely is summoned to Salem Village Parish, where it has become obvious to church authorities that there is serious trouble. He is reluctant to return to his hometown for many reasons, not the least being that his heart is broken and he’s worried about running into his former lover, Serena Nurse. During his investigation, he has no expectation that their love will be rekindled. But their renewed passion parallels a greater fire—one of terror amid the infamous Salem Witch Trials. A witch hunt in this important election year of 1692 is backdrop to a romance filled with intrigue and mystery; the history is accurate, and the truth is disturbing yet fascinating.

“You want me to go into Salem Village Parish disguised as a man of the cloth and that doesn’t offend you?” Jeremiah Wakely hoped the level of his shock didn’t show on his face.

“Not in the least!” Reverend Cotton Mather fired back, registering the surprise on Wakely’s starkly handsome Black Irish features.

“Not in the least,” parroted Jeremiah in a near whisper, pushing aside a shock of raven-black hair.

“Not so long as it provides us with what we need, Brother Wakley.” The two men had walked the length of the public area of the great North Church of Boston from rear pew to altar. “Look here, Jeremiah, my friend, you’ll have no problem ingratiating yourself with this Reverend Samuel Parris.”

“I am not so sure, sir? Not from what I’ve seen of him in the court records your father provided me.”

“Parris has asked for another pair of hands at his troubled meetinghouse, so the man’s expecting us to send someone,” Reverend Cotton Mather assured Jeremiah Wakely as he walked him deeper into the bowels of the First Church of Boston. “And you with your gift of appearing anything but who you are…and with your knowledge of law and theology—who better to pull off this subterfuge?”

“My going into Salem Village Parish disguised as a man of the cloth doesn’t offend you . . . or your father?” Jeremiah asked.

“Not so long as it provides us with what we need, Brother Wakely.”

“I’m just not anxious to go back to the place of my birth as…as an agent for the Boston Church.” It was hardly the only reason Jeremy wished to steer clear of Salem. Bad history for one, and Serenity for another—Serena, he and her brothers called her.

Jeremy had seen Serena’s family name on more than one of the petitions and complaints labeled at the relatively new minister at Salem, this dubious fellow named Parris. Truth be known, Jeremy’s true reluctance to take on this assignment had all to do with Serena Nurse—youngest daughter to Rebecca and Francis Nurse. His plan—if ever to make her his—had not included spying while playing the role of an apprentice minister. Even so, his heart swelled at the thought of finding her after all this time.

He pictured her smile, the radiant blue eyes, sun-dappled hair, and trim body. He recalled their last kiss at the Frost Fish River’s edge, and their first kiss in the great hayloft. He recalled her laughing and running from him. He pictured her swinging down on a knotted rope that her father had made for the children’s sport.

The Nurses had been a large and generous family, and he’d loved Serena. But it had been a decade since he’d left Serena behind without word of why.

“Please, Jeremy,” Mather was speaking in his ear, having to tiptoe to reach Jeremy’s height while holding open the door to the great hall leading to the sanctuary and the library. “Who better for this work than you?”

“There’s Boswell, Connery!” Jeremy held hat in hand and still the doorway must be negotiated carefully for his six-foot frame.

“But you know the terrain and the people—you were once one of them.”

Jeremiah caught sight of himself and Mather in the great mirror at the end of the polished red corridor. An odd-looking couple ill-fitted to one another. Wakely’s muscular lanky frame beside Mather’s hefty, barrel-chested body created the look of a blackguard highwayman conspiring with a cloaked minister whose tender limp spoke of the gout. Certainly, Mather appeared too young for the disease but in fact, he ate far too well. Jeremiah must slow his own stride to keep from out-pacing the minister who’d placed so much coin in his hands.

“You know what I mean. Father insists you are our man—the best hope in this affair.” Mather’s appeal bounced off the wall and echoed down the corridor. He may as well be shouting.

Jeremiah wondered how effective he could be on this—hopefully—his last assignment on behalf of Increase Mather—Cotton Mather’s father and head of the church in the Massachusetts Bay Colony.

This wasn’t the first time he’d been summoned to the back rooms of the largest church in all of Boston to do a job for the Mather family. The pay was generous, and the favors and promises real gifts. To have Increase Mather’s respect and gratitude, not to mention the top minister and legal mind in the country indebted to him? These rewards were too good a prize for a young and ambitious man to turn from. Jeremiah had searched for years to find his place in the world, here in the Bay Colony, and to see his way to his fortune and his comfort. He’d long before stopped dreaming of all that he wanted in life, but here was a chance at a gold ring or two.

“Get inside that disturbed parish, Mr. Wakley,” Cotton Mather instructed.

“To be honest, sir—” Jeremiah felt odd calling Cotton, a shorter and even younger man than himself, sir, but Cotton Mather was the heir apparent here—“I’d rather tangle with pagan Indians than face certain Salem villagers.” Returning unannounced and doing the sort of work I do? What might it cost in the end? Any last vestige of hope of making peace with Serena? It’d surely amount to old wounds reopened. Or seeing the ugly truth of it—wounds so well healed over as to give her no discomfort whatsoever?

Mather laughed at Jeremiah’s last remark and showed his guest through an inner door, a magnificent library, something to challenge the library at Harvard College. Jeremiah scanned the room, wishing he could read every book here when his eye fell on an infamous title: General Rules for Excommunication and Witch Craft Proceedings. One tomb he cared not to read.

“You’ve done well keeping us apprised of Indian movements, Jeremy.” Mather indicated a leather chair, but Jeremiah continued scanning book titles instead, mesmerized. “But this matter of that troubled village parish has become a disease, and we must know the facts.”

“So many differing sides from what I’ve seen so far,” Jeremy muttered.

“Exactly! It’s become a hydra of tongues in our courts.”

Mather’s unusual metaphor for the troubles among the parishioners at Salem Village and some in Salem Seaport threw Jeremiah into a reverie. From all the papers that he had read of the cases that had continually plagued the courts, it appeared that since the day Reverend Samuel Parris signed his contract at Salem, discord ruled. The minister himself had become an angry, bitter, and displeased fellow; displeased with a large contingent of his congregation.

“Perhaps the man is angry by nature,” Mather continued, shrugging, “but now he’s angry over this infernal contract.”

“Questions every word and point, it seems,” Jeremy agreed, turning from the books to face Mather. “And he wishes to sue individuals and whole families.”

“Repeatedly!” Mather’s hefty mid-section bounced with his laughter. “And the man’s repeatedly choking the court system. He’s obsessed! Imagine a man using the courts to combat those who’ve employed him.”

Jeremy had seen Parris’ court papers a few days before when Increase Mather asked him for an opinion. It was the first time he’d seen the Nurses named in the suit—Serena’s father, Francis in particular. In fact, his initial reaction to seeing anyone finding any fault with Francis Nurse left Jeremy scratching his head. This man and his wife had been the kindest of people toward Jeremy.

The opposition had tired of Parris’ three-year reign over the village parish, and according to these parishioners, it’d been a tyrannical rule at best. A Puritan meetinghouse held certain democratic principles, at least among the elder male and female adults, but even these freedoms of the ‘freemen’ and ‘freewomen’ in Salem Village, some felt, were under threat of complete loss so long as Parris presided there.

Mather broke into Jeremiah’s thoughts with, “My father and the minister at Salem Town Church—”

“Reverend Nehemiah Higginson, is it? Is he still at the pulpit?”

“Yes, aha! You do know people in Salem.”

“Only in passing as a boy.” Jeremy recalled Higginson’s booming voice filling the meetinghouse in the village on occasions when he’d visit from his seaport parish. He recalled a sturdy, strong, and straight up man in black with graying hair and huge shoulders. Serena Nurse had once said of Higginson that he was a minister whose compassion would put angels to shame, but that was ten years ago, and Serena was, like Jeremy at the time, a fifteen year old.

“At any rate,” continued Mather, “it’s at Reverend Higginson’s behest that we find evidence against Parris.”

“How much evidence—and evidence of what nature?” Jeremiah pressed Cotton Mather.

“Enough to topple him from the parish altogether. Whatever it takes.”

“No need of crafting it with this man,” countered Mather. “He is his own worst enemy.”

“Then this matter is already decided?” Jeremy sat now.

“My father and Mr. Higginson are old friends and colleagues.” He offered Jeremiah a dram of ale poured from a pewter pitcher. Jeremiah took the offering and drank deeply.

“I understand they go back to Seminary School together at Harvard College.”

“Harvard, where eventually and for many years after, your father presided as president before taking over as spiritual leader of the First Church here. Little wonder your father is suspicious of this Samuel Parris.”