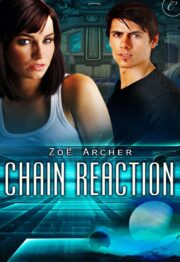 Elite 8th Wing pilot Celene Jur was taken captive after a mysterious device temporarily disabled her ship’s controls. Three solar months later, when Celene receives intel on the man who built the device, she’s ready to get the bastard. Only problem is, the higher-ups think her mission partner should be Nils Calder, a tech-head who can understand the disabling device. The attraction between them is electric, but Celene needs a soldier who can watch her back as she exacts her revenge.
Nils knows his department is nicknamed NerdWorks. Pilots like Celene think the closest tech geeks come to combat is all-night Nifalian chess tournaments. But behind the NerdWorks insignia on his sleeve Nils is an able fighter, ready to prove himself and gain Celene’s trust.
The desire between them is unexpected, but with the fate of thousands hanging in the balance, the hotshot pilot and the tech genius must succeed in their mission—no matter the cost.

Lieutenant Celene Jur wanted vengeance. And now she was going to get it.

She strode down the corridors of the 8th Wing Base, adrenaline pumping through her body. As she walked, soldiers and pilots hurried out of her path—they knew when the fire gleamed in her eyes, nothing stood in her way. That’s how she’d gotten through the grueling Black Wraith training in only sixteen solar months. Only Commander Kell Frayne had ever surpassed her record. He’d completed training in ten solar months, but her old friend was as determined as a siyahwolf on the hunt. Just like her.

Three solar months. It had been three solar months since she had been tricked by a false distress signal. When she had flown to investigate, someone had used a device to temporarily disable her Black Wraith ship. She’d been helpless, powerless. Taken captive. If Kell and Mara Skiren hadn’t rescued her from the auction block, she’d be someone’s pleasure slave now, and her ship torn apart, its secrets sold to PRAXIS.

By the Ten Hells, the person responsible would pay.

Striding into the mess hall, she surveyed the rows and rows of crowded tables. Normally she enjoyed the sound of hundreds of 8th Wing servicemen and servicewomen sharing a meal. Laughter and banter was a necessary counterpart to the life-or-death battles they faced every day. Today, the sound was simply noise. A few people saw her standing at the entrance and waved, but she kept scanning faces until she saw the two she wanted. She walked quickly through the mess, her heart pounding.

She braced her hands on the edge of their table. It surprised her that the table didn’t shake with the amount of energy she exuded.

“We got the bastard.”

“Yes, I’d love a refill of kahve, thanks.” Kell smiled up at her. Since Mara had joined the 8th Wing, Kell smiled more than Celene had ever seen him smile before. When he saw Celene’s face now, though, his smile faded. “The bastard?”

“The one who made the disabling device.” She tried to sit, but couldn’t relax enough, so she remained standing. “Command says they have a lead, and I’m going to follow it.”

“I’d like to use that fuck’s head for target practice.” Mara might be 8th Wing now, and far along in her training to become a Black Wraith pilot, but she still had the heart—and language—of a scavenger.

“You can’t,” said Celene. “Because when I find him, I’m going to cut off his face and decorate the cockpit of my ship with it.”

“Don’t know yet. Got a meeting at 13:00 to talk details.” Celene checked her chronometer. “That’s in ten minutes.”

In unison, Kell and Mara stood, wearing equally determined expressions. “We’ll go with you.” Mara swallowed the last of her kahve and slammed her mug on the table.

“I’d like you to,” Celene answered, “but if you’ve got something else scheduled…”

The fierce look on Kell’s face showed why he was one of the most decorated pilots in the 8th Wing. He fought hard, and with deadly intent. At the controls of his Black Wraith, or even when he trained in hand-to-hand in the combat simulator—there wasn’t a more merciless fighter.

He growled. “Some lowlife makes a device that hamstrings Black Wraith ships, our best weapon against PRAXIS. Endangers all of us, and hurts you.” His jaw tightened. “This fight belongs to all of us.”

His fighter’s spirit had attracted her, once. Years ago, for a few solar months, she and Kell had been lovers. But they soon realized they were better friends than lovers, dedicated more to the war against PRAXIS than each other.

Determination and loyalty gleamed also in Mara’s eyes. “And if there’s anything left over after you’re done with him, I know some parts dealers who’d love to buy his spine and organs. Preferably while he’s still using them.”

It pleased her that Kell and Mara could find happiness together, unlikely as it had seemed at the beginning. A Black Wraith pilot and a black-market scavenger made an unexpected pairing. But it worked, and well.

“Let’s go.” She turned and strode back through the mess, with Kell and Mara right behind her.

Her parents had thought her crazy to leave behind a quiet life of ferrying passengers to and from her homeworld’s moons. But PRAXIS threatened everything. Joining the war against the corporate giant had gained her a cause and a new family.

As they walked through the base toward Command offices, her thoughts were too focused to join the conversation, though she heard Mara and Kell.

Celene understood. Yesterday, Mara finally had her biotech implant grafted just beneath the surface of her right palm, a signal that she was well on her way to becoming a Black Wraith pilot. All Wraith pilots had the implants, since the ships would not run without them. The implants were part of the reason Black Wraiths were so effective—and coveted. They allowed the ship’s pilot to merge with the craft, creating a seamless integration of thought and action. PRAXIS had tried to reproduce the design, but with limited success. Without an actual Black Wraith to copy, they hadn’t gotten far. All that could change, though, with the use of the disabling device. Either PRAXIS would finally get their hands on a Black Wraith and dissect it, or they’d simply knock the paralyzed ships out of the sky.

Neither option was good. She had to make sure neither came to pass.

“Maybe I need to take your mind off of it,” murmured Kell. “Scratch another itch.”

“Later, flyboy. We’ve got an organ donor to hunt down.” But Mara sounded husky, definitely intrigued by Kell’s offer.

Some crewmen whispered to each other as Celene strode by.

She walked on, avoiding the admiration in their gazes and the moniker she had been given. She’d be a fool to let such idolatry affect her. The moment she believed she was the goddess everyone thought she was, she might as well take a plasma blast to the head. An arrogant pilot was a dead pilot. And she couldn’t die. She had too many battles to fight.

A clerical ensign hurried forward when Celene reached Command’s offices and pointed her toward one of the briefing chambers. With Kell and Mara accompanying her, she strode on. If given clearance, she’d leave base today.

Her code at the door of the chamber was accepted, and the door slid open to reveal Admiral Elora Gamlyn standing next to a holo display at the far end of the room. Celene, Kell and Mara all saluted.

“Only your presence was requested, Lieutenant.” The admiral eyed Mara and Kell.

“I’d like them to stay, ma’am, if possible. This intel concerns all of us.”

“We know the gravity of the situation, ma’am,” Kell said.

“So who’s the sipkaswine we’re after?” asked Mara.

Celene choked down a laugh.

“Mara.” Kell placed a hand on her shoulder.

At least the admiral smiled. “Your enthusiasm is heartening, Ensign Skiren. We’re waiting for someone to join us, and then the briefing can commence.” The alert at the chamber door trilled. “And he’s here, now.”

Everyone turned to face the newcomer as the door slid open. He stepped inside, then stopped abruptly when he saw everyone staring at him expectantly.

She had an indistinct impression of having met this man before, but she wasn’t completely certain. 8th Wing was thousands strong, with hundreds on base at any given time. Black Wraith Squad usually kept to themselves. They were an elite group, and more than a little insane. Adrenaline junkies who lived to fly. No wonder everyone gave them a wide berth.

The man walking into the chamber gazed at her. Alarm and fascination combined in his eyes.

Not a surprise. She was given a wider berth than most. Few people made friends with a legend. And as for having a romantic relationship…by becoming one of the best pilots, she’d inadvertently consigned herself to celibacy. She could never be the flawless paragon her lovers wanted. Stainless Jur—that’s who they desired. Tough experience had taught her that it was better to be alone than see the disappointment in her lovers’ eyes when they learned she wasn’t a goddess, only a woman. A very skilled woman who could fly better than most sentient beings in the galaxy, but a woman, nonetheless.

The newcomer stared at her like she was a tigeren that had escaped its cage.

He wasn’t an unpleasant specimen of maleness. He didn’t have Kell’s height or impressive build. Instead he had a lean muscularity that nicely filled out his uniform without being showy. Sandy hair, deep green eyes that gleamed with intellect, a face more rugged than handsome. His mouth surprised her, with its full lips better suited for a fashion vid model than a soldier.

That mouth…seemed so familiar. As if she knew its taste, warm and masculine. No—she’d remember lips like his.