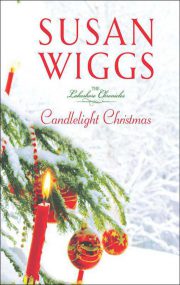 A single father who yearns to be a family man, Logan O’Donnell is determined to create the perfect Christmas for his son, Charlie. The entire O’Donnell clan arrives to spend the holidays in Avalon, a postcard-pretty town on the shores of Willow Lake, a place for the family to reconnect and rediscover the special gifts of the season.
One of the guests is a newcomer to Willow Lake— Darcy Fitzgerald. Sharp-witted, independent and intent on guarding her heart, she’s the last person Logan can see himself falling for. And Darcy is convinced that a relationship is the last thing she needs this Christmas.
Yet between the snowy silence of the winter woods, and toasty moments by a crackling fire, their two lonely hearts collide. The magic of the season brings them each a gift neither ever expected—a love to last a lifetime.

The origin of the Christmas pickle is steeped in mystery. It seems no one knows the real truth. The hand-blown glass pickle ornaments from Lauscha in Germany can date back as far as 1847, and are treasured by families everywhere. The first child to spy the ornament on the tree Christmas morning gets an extra gift from Santa, and the first adult enjoys good luck all the year through. It’s probably just a marketing hook, but who doesn’t like presents and good luck?

The pickle prize inspired this recipe for jars of colorful pickles. Since these are no-process pickles, they are a) easy and b) perishable.

Fill clear glass jars with the pickles and radishes, creating a nice color palette of red and green. Add the herbs and spices. Combine the water, vinegar, sugar and salt in a jar with a lid, and shake to dissolve. Pour over pickles in the jars. Seal and refrigerate. These will be ready the next morning and can last up to a month—after that, please discard for safety’s sake. The longer the cucumbers pickle, the softer they will get, and if you don’t grasp that metaphor, I can’t help you. Anyway, if you like things fresh and crisp, don’t wait too long to eat these.

There were worse things than spending Christmas with your ex-husband, thought Darcy Fitzgerald as she pulled up in front of the house.

A root canal without novocaine, for example. That was probably worse. A crash landing in a small aircraft, perhaps. Reading Silas Marner in ninth grade. Frostbite, a crocodile attack, eating a bad oyster. Head lice.

She enumerated the many ways things could be worse, all the while bracing herself for the hours to come. The car tires churned up last night’s melting snow as she jockeyed her Volkswagen into the small space.

She’d dressed with special care, determined for Huntley to see that he’d lost something special. Deep down, she knew the notion was ridiculous; Huntley Collins had not truly seen her in a very long time.

While pulling the bag of gifts from the trunk, she stepped into the ankle-deep grimy slush. As it flooded her favorite kitten-heel suede shoes, the bone-freezing ice took her breath away. She reared back, slipping on the crusty ice, and landed butt-first in a dirty snowbank. The bag of parcels broke open, and her festively wrapped packages littered the ground.

“Awesome,” she muttered, pulling herself up and trying to brush the filth off her skirt.

Perhaps the most hellish part of the day was the knowledge that she had agreed to this travesty. Huntley had convinced her to get through the holidays together so they wouldn’t ruin things for everyone else.

The Fitzgeralds and the Collinses had been best friends and neighbors for decades. The two Collins boys and the five Fitzgerald girls had grown up together, playing hide-and-seek on summer nights, surfing at Cupsogue Beach, pulling pranks on one another, sneaking beer from the fridge for liquid courage before a school dance, telling each other secrets...and lies. Huntley’s older brother was married to Darcy’s older sister. The families’ fortunes were meant to be entwined forever.

Unfortunately, Huntley’s notion of forever spanned approximately five years. Darcy had found out about his affair—with his ex-wife, just to make things even worse—before Thanksgiving. Yet she had come today out of regard for her stepkids, Amy and Orion, though she expected little from the sullen, resentful teenagers.

She’d been part of their lives for five years, and she had selected their gifts with care. In a weak moment, she’d bought a little something for Huntley, so he’d have something under the tree from his kids, who were too self-absorbed and, at the moment, confused, to shop for him.

She found the smallest of the scattered packages in the ditch—the yodeling plastic pickle. There was a tradition that the first to find the pickle on the tree would get a special surprise. She moved the switch on the back of the pickle. It made a brief gurgling sound and then died.

“Surprise,” she muttered, and trudged grimly up the stairs to the front door.

Just because you’re a single dad is no excuse for feeding your kid junk food. At some point you have to suck it up and learn to cook like a man.

Never underestimate the power of the fantastic bowl of spaghetti.

1 onion about the size of your fist, cut up

Simmer the first three ingredients together for 45 minutes, and then blend with an immersion blender or food processor. Pour over hot spaghetti and pass the parm.

Logan O’Donnell stood on a platform one hundred feet in the air, preparing to shove his ten-year-old son off the edge. A light breeze shimmered through the canopy of trees, scattering leaves on the forest floor far below. A zip line cable, slender as a thread in a spider’s web, hung between the tree platforms, waiting. Below, Meerskill Falls crashed down a rocky gorge.

“There’s no way I’m going off this.” Logan’s son, Charlie, drew his shoulders up until they practically touched the edge of his helmet.

“Come on,” Logan said. “You told me you’d do it. The other kids had a ball. They’re all waiting for you on the other side, and I heard a rumor about a bag of Cheetos being passed around.”

“I changed my mind.” Charlie set his jaw in a way that was all too familiar to Logan. “No way. No W-A-Y-F.”

Logan knew the shtick, but he went along with it. “There’s no F in way, dude.”

“Aw, Charlie. It’s almost like flying. You like to fly, right?” Of course he did. Charlie’s stepfather was a pilot, after all. Logan crushed the thought. There were few things more depressing than thinking about the fact that your kid had a stepfather, even if the stepfather was an okay guy. Fortunately for Charlie, he’d ended up with a good one. But it was still depressing.

Charlie spent every summer with Logan. During the school year, he lived with his mom and stepfather in Oklahoma, a million miles away from Logan’s home in upstate New York. It sucked, living that far from his kid. Being without Charlie was like missing a limb.

When he did have his son with him, Logan tried to make the most of their time together. He planned the entire season around Charlie, and that included working as a volunteer counselor at Camp Kioga, helping out with the summer program for local kids and inner-city kids on scholarship. The zip line over Meerskill Falls was a new installation, and had already become everyone’s favorite feature. Nearly everyone.

“Hey, it’s the last day of camp. Your last chance to try the zip line.”

Charlie dragged in a shaky breath. He eyed the harness, made of stout webbing and metal buckles. “It looked really fun until I started thinking about actually doing it.”

“Remember how you used to be scared to jump off the dock into Willow Lake? And then you did it and it was awesome.”

“Hel-lo. The landing was a lot different,” Charlie pointed out.

“You’re going to love it. Trust me on this.” Logan patted the top of Charlie’s helmet. “Look at all the safety features on this thing. The harness, the clips, the secondary ropes. There’s not one thing that can go wrong.”

“Yo, Charlie,” shouted a kid on the opposite platform. “Go for it!”

The encouragement came from André, Charlie’s best friend. The two had been inseparable all summer long, and if anyone could talk Charlie into something, it was André. He was one of the city kids in the program. He lived in a low-income project in the Bronx, and for André, it had been a summer of firsts—his first train trip, his first visit upstate to Ulster County, where Camp Kioga nestled on the north shore of Willow Lake. His first time to sleep in a cabin, see wildlife up close, swim and paddle in a pristine lake...and tell ghost stories around a campfire with his buddies. Logan liked the fact that at camp, all the kids were equal, no matter what their background.

“I kind of want to do it,” Charlie said.

“Up to you, buddy. You saw how it’s done. You just stand on the edge and take one step forward.”

Charlie fell silent. He stared at the waterfall cascading down the rocky gorge. The fine spray from the rushing cataract cooled the air.