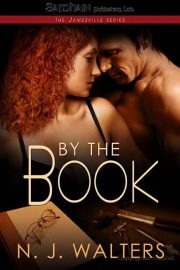 Between the pages…between the sheets…something’s smokin’!
Jamesville, Book 6 Amanda Barrington hopes Jamesville is the right place for her rare-book business—and her new life. The moving truck barely pulls away before both are off to a rousing start. It’s not her new customer that’s caught her attention, though. It’s the customer’s brother, Jonah Sutter. From the moment cynical, ex-military Jonah sets eyes on Amanda, he burns for her like a house afire—which is what she’s going to have if she doesn’t get her house’s electrical system overhauled. He knows he’s not a forever kind of guy, but he’s more than willing to be her fix-it man. In more ways than one. When unexpected danger threatens, Jonah finds himself dealing with more than just the desire to get Amanda into bed. Protecting her means moving in, which exposes them both to a new danger—losing their hearts.

Thank you to all the readers who have loved visiting Jamesville as much as I do. I’m not quite done with this town yet!

To Gerard—you are my inspiration and my biggest supporter. There is no way to thank you enough for everything that you do.

As always, thank you to my editor for her keen eye and hard work.

Amanda Barrington placed her hand on her stomach and prayed she wouldn’t puke.

That so wouldn’t be good for business.

She still couldn’t quite believe she’d packed up her old life in Vermont and moved to Jamesville, Maine. Not only that, but she was now a homeowner as well. The butterflies in her tummy started to dance around once again, so she closed her eyes and took a deep breath to help settle them.

When she opened her eyes, she was still in the front room of her new home, surrounded by boxes waiting to be unpacked. She was also waiting for her first new client. Elizabeth Sutter was dropping by with a dozen boxes of hardcover books she wanted Amanda to have a look at. Recently divorced, Elizabeth was trying to clear out the remnants of her old life so she could start anew.

While Amanda was sorry for Elizabeth’s troubles, she was excited to see what books the other woman had. That was the nature of her business. As an antiquarian and rare book dealer, Amanda did some of her best business when heirs were clearing out estates, or when the newly divorced or widowed were looking for a fresh start. While she had empathy for her customers, she couldn’t quite quell the excitement that gripped her whenever she opened a box of books. One never quite knew what would be inside.

Of course, she had a steady stream of regular collectors with whom she dealt on a constant basis. She’d learned her profession well, and been mentored by one of the best in the business. Irascible and brusque to most, Seymour Morton had taken Amanda under his wing when she was just a gawky teenager, teaching her the business and sharing his wealth of knowledge and contacts with her. It hurt her that she couldn’t pick up the phone and talk to Seymour. She still couldn’t quite believe he was gone. He’d been ninety when he’d died in his sleep, but somehow she’d expected him to live forever.

A heavy knock sounded on the front door, shaking Amanda from her reverie. “You can do this,” she muttered. She’d dealt with hundreds of clients, but this was the first time she hadn’t had Seymour beside her.

Walking to the front door, she pulled it open and came face-to-face with a man who made every single thought vanish from her mind in a heartbeat. His midnight-black hair fell to his shoulders in a waterfall of silk. Her fingers curled into her palms, itching to touch it to see if it was as soft as it looked.

Pale green eyes tipped with thick, dark lashes stared back at her. They reminded her of cat’s eyes. They held the same intense, predatory stare of a cat just before it pounces.

Amanda was finding it hard to breathe, impossible to think. Her skin flashed hot and then cold. She’d swear she was having a menopausal hot flash, except for the fact that she was only thirty-one.

His face was all angles and planes, his lips thin. His nose was slightly crooked, but that in no way detracted from his appeal. This was one sexy man, and she hadn’t even managed to check out what was below his neckline yet.

Her breasts swelled and a low throb began deep in her belly. What the heck was wrong with her?

His voice sent shivers skating down her arms, raising goose bumps in their wake. It was so deep and richly textured. This guy could read the phonebook and make her cream her panties.

He arched an eyebrow at her. She opened her mouth to speak, but was interrupted by a woman’s voice. “Jonah, is anything wrong?”

Like a splash of cold water, reality came crashing back. She was ogling a complete stranger at her front door and he was obviously with a woman. Amanda could feel the heat creeping up her cheeks and the butterflies in her stomach began to flutter again.

“Hi, I’m Elizabeth Sutter.” A lovely brunette with creamy white skin and a shy smile juggled a box in her arms and held out her hand.

Amanda shook the proffered hand as her mind began to fire on all cylinders once again. This was her new client. For the first time since opening the door, she took in the entire scene in front of her. It was only then she noticed that the hunk was holding a large box in his arms.

“Come in.” She pulled back the door and motioned them into the front room, the home of her new business, By the Book. “Please forgive the mess. The moving truck only left an hour ago and I’m up to my ears in boxes.”

Amanda tried not to look at the guy’s behind as he bent down and placed the box on the floor. She really did. But she couldn’t resist. Tight and firm, his ass filled out his jeans to perfection. And she shouldn’t be checking out the guy’s butt, not with Elizabeth standing in the same room. What was wrong with her? She wasn’t the type to poach on another woman’s man. He straightened, turned and stared at her as if he knew exactly what she’d been doing.

Once again, she felt the heat on her cheeks and cursed the fact that she blushed so easily. Combined with her freckles and curly reddish-brown hair, she must look a sight.

“Oh, we could come back another time if it’s not convenient.”

Amanda’s gaze shifted to Elizabeth Sutter, who was nibbling on her lower lip and looking concerned. The box she was carrying was poised in the air, as if she couldn’t quite decide if she was going to put it down or make a run for it. Amanda pictured her new client, and all her books, walking out the door.

Back to business. “Not at all.” She smiled, genuinely pleased to have her very first local client. “I’m sorry for all the mess, but I’m excited to see your books.”

Elizabeth smiled as the man took the box out of her arms and laid it atop the one he’d brought in. “That’s wonderful. This is my brother, Jonah Sutter.”

Relief, all out of proportion to the situation, flooded through Amanda. She didn’t even know Jonah, but finding out he wasn’t romantically attached to Elizabeth sent her hormones jumping. Of course, that didn’t mean he didn’t have a wife or a significant other somewhere out there. And she really had to keep her mind focused on business, not on her attraction to Jonah. “Pleasure to meet you.” Amanda was proud of the way her voice didn’t break. She sounded calm and personable. She extended her hand in greeting.

His green-eyed gaze never leaving her face, he closed his fingers over hers. Heat and strength seemed to radiate from the man. He slowly inclined his head. “You’re Amanda?”

God, could she be anymore scatterbrained? “Amanda Barrington.” She forced herself to pull her hand away even though she would have been quite content to leave it exactly where it was. He had wonderful hands—broad, slightly rough and very strong. A shiver ran down her spine as she imagined those hands running up her arms and down her torso, wrapping around her hips.

“Pleasure.” He turned from her and headed back to the front door. “I’ll get the rest of the boxes.” Amanda noted the way his shoulders filled out his leather jacket and the fact that his boots made no sound on the hardwood floor. He moved silently for such a big man.

“Thank you, Jonah.” Elizabeth’s voice jerked Amanda’s attention back to her client, who waited patiently.

Thankfully, the other woman hadn’t seemed to notice anything amiss. Pulling her professional persona around her, Amanda motioned her client to the lone chair in the room. “Please sit down. Can I get you some coffee? Tea?” She thought she knew where to find the kettle, but she wasn’t one hundred percent sure.

“No. That’s fine. I know you’re busy getting settled, but I just wanted to get these boxes out of the house.” Elizabeth bit her lower lip again and looked away.

Elizabeth’s vulnerability hit Amanda squarely in the chest and her professional demeanor slid away, replaced by genuine concern. “That’s okay. I understand how these things are. Divorce is never easy. You’re ready to start your new life and this is a part of the past you need to deal with and clear away.”

“That’s exactly it.” Elizabeth motioned to the boxes, a tremulous smile on her lips.

“There are several hundred books, but I’m not sure if any of them are valuable. I got half of the library in the settlement. I picked out the books I wanted to keep, but these…”

Elizabeth waved her hand toward the boxes, “…these are the ones I really don’t want.”

Amanda nodded, crouching on the floor. “That’s why you have me. Let’s see what we have here.” Pulling the smaller box down in front of her, she folded back the flap. The familiar excitement coursed through her. The smells of paper and ink rose up to hit her nostrils.

She sensed Jonah just before another box appeared beside her. She didn’t look at him when he turned and left, even though she wanted to. That was one good-looking man.

One by one, she pulled the hardback books from the box. Most were of minimal value—first editions of popular fiction authors that would sell from anywhere between five and twenty dollars. But at the very bottom was a gem.

Amanda picked up the book carefully and gently pulled back the cover, examining the endpapers before turning to the copyright page. It was as she suspected. “This is an original copy of A Clockwork Orange.” The cult classic by Anthony Burgess was worth a pretty penny to collectors.