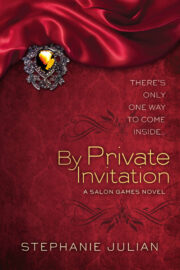 Some invitations don’t need to be sent…only accepted.
Antiques dealer Annabelle Elder’s life is nowhere near as passionate as the erotic art she collects. A cheating ex-boyfriend and her business have seen to that. So when she attends a New Year’s Eve party at Haven Hotel, she sees a chance to blow off some steam. But she never expected to meet anyone like Jared—or to experience such passion in his arms…
Handsome, rich, and charming as hell, Jared Golden brought his Midas touch to Haven Hotel—and created an anything-goes pleasure palace on one floor to cater to his special friends and their very special desires. After falling in lust with Annabelle at first sight, seducing her was easier than he expected. What he didn’t expect was to be seduced in turn…
But unrestrained passion in the bedroom is not the only spark between Annabelle and Jared. Their mutual attraction is confounded by their separate pasts. Caught in an ever-growing web of painful secrets and sensual fantasy, will they be able to face the truth about themselves and trust in true love?

For David, again and always.

And for Kate, who didn’t live to see this published,

but whose notes on early pages led me to the book it’s become.

Writing is such a solitary endeavor but publishing is not.

Thank you, Leis, for seeing what I see in this story. And for what I didn’t.

Thank you, Elaine, for your rock-steady guidance.

Thank you, Judi, just because.

Thank you, Deb, for the shoulder to whine on.

Thank you to the women of VFRW, who are always there with hugs and cheers and stickers and chocolate.

And thank you to my sons, who know I still love them even when I don’t always feed them.

“Jesus, I really hope I don’t get arrested for indecent exposure. Could you have made my neckline any lower, Kate?”

Staring into the mirrored doors as they waited for the elevator in Haven Hotel, Annabelle Elder barely recognized herself. If not for the pale green eyes and the auburn hair, she wouldn’t have.

The woman in the reflection looked freaking amazing with her overflowing breasts and miles of leg. But she didn’t look like any version of the Annabelle she thought she knew.

“Of course I could have,” Kate Song huffed. “But then you would have been arrested. Stop fussing. You look fine, Annabelle.”

Kate reached out to fluff Annabelle’s skirt for the hundredth time, exposing more thigh than Beyoncé on Grammy night.

“Enough already.” Annabelle swatted at Kate’s hands. “I barely recognize myself as it is.”

Annabelle pulled a face at her best friend. Yes, yes. She’d said that, but—

“Hey!” She yelped and grabbed her skirt as Kate pulled it higher on her thighs. “Do you want me to get arrested for soliciting? Gary the Asshole would love to see me locked away.”

“Oh, please.” Kate sighed loudly but stepped back, moving her straight black hair off her shoulders. “That jerk deserved whatever you threw at him.” She paused and Annabelle glanced up to see Kate’s grin. “Including his file cabinet.”

Annabelle’s nose wrinkled. “Too bad it only grazed his shoulder, the ass.”

She wished she’d taken the two-timing jerk’s head off with the thing. Or aimed a little lower and caught his dangling bits. Little itty-bitty bits that’d been on full display three weeks ago when she’d caught the bastard with his head between his secretary’s legs.

“That jerk’s not worth one more second of your time.” Kate flicked her on the shoulder for good measure. “Except to thank him for busting you out of a rut. Think of tonight as your coming-out party.”

Annabelle tried to take a deep, calming breath but could barely manage against the tight lacing. “I’ll be coming out of this dress if I breathe too deeply.”

The matching silk-and-satin fairy costumes created by Kate were masterpieces. But where Kate’s blue bodice had a demure little dip in the front, Annabelle’s green one angled down nearly to her belly button. Kate’s short, filmy skirt hit just above her knee. Annabelle’s barely made it to mid-thigh. She was afraid to look at her rear view again. The skirt was a little longer in back so she wasn’t showing off her ass, left naked by a green satin thong, but still…

“Thank God for big-busted pop singers and all those rappers who love big-ass girls,” Annabelle said with a sigh.

Not that she’d ever flashed so much of it. Her friends and neighbors in Adamstown would be scandalized if they saw her now. They only knew quiet, sedate Annabelle who’d been so damn busy keeping her business afloat for the past year. Poor, stupid Annabelle who should’ve dumped Gary the Asshole long ago.

At least she no longer resembled that girl. Rita Shumacher had quivered with joy from her platinum beehive to her open-toed Manolo knockoffs when Annabelle had told her to cut off her waist-length braid. Then the sixty-something hairdresser had worked her magic and tamed the remaining unruly mass into sleek curls that just brushed her shoulders.

Now Annabelle looked sexy. Confident. Ready to find a man to share her bed and her fantasies for the night before reality returned Monday morning.

Kate yanked on the laces on the back of her dress, making Annabelle squeak.

“I know what you’re thinking and you can stop right now,” Kate said. “No business tonight.”

Annabelle sighed. “I know, but don’t you dare.”

Kate gave an eye-roll worthy of a teenager as her hand froze midway to Annabelle’s hem.

“You know,” Kate said, a distinct challenge in her tone, “if you want to chicken out, we don’t have to go to the party. I’m only here to keep you company. I don’t need a man. I already have a fiancé.”

The two tickets for the New Year’s Eve Masquerade at Haven Hotel in Philadelphia had cost a small fortune. More than Annabelle ever would’ve considered spending for any party.

She’d seen the ad boasting gourmet food, fine champagne, live music, and a night to remember in a piece of newspaper wrapping an antique vase months ago. She’d thought that it sounded like fun, but dismissed it because Gary would never agree to go, the cheapskate. After she’d dumped him, she’d called for tickets.

The bell dinged and the elevator doors opened, whisking away her reflection as they stepped into the empty cage for the ride to the lobby.

Annabelle squared her shoulders. “We’re going. And I will have fun tonight. It’s been too long since I had a good time. No one knows me here. I can flirt with a gorgeous guy, dance all night. Maybe even get laid.” She looked down at Kate. “Do you know how long it’s been since I had good sex?”

Her best friend since college, Kate had her Korean father’s dark eyes and his sleek, straight hair. The rest of her was pure Italian from her late mother. The combination gave her an exotic beauty that always made Annabelle feel like a limp dishrag next to her.

If they hadn’t been best friends since their freshman year at Gettysburg College, Annabelle would try to hate her. But Kate was too nice to hate. Even with her sharp tongue, occasional foul mood, and inexplicable taste in fiancés.

“Unfortunately, yes,” Kate said. “I know how long you went out with Gary.”

At least, I’m going to try.

The door opened again, depositing them in the sinfully elegant lobby of Haven Hotel, and Annabelle touched the antique pin on her bodice for luck. The six-carat, teardrop-shaped orange citrine glowed as if lit from within.

Her grandfather had given it to her a decade ago. After her world had collapsed.

“Good for you.” Kate smacked her on the rear, making Annabelle laugh as they stepped out of the elevator. “Now get out there and get laid.”

Not always in that order.

Tonight, it was the reverse.

From his vantage point at the Italian marble bar in the second-floor ballroom, he surveyed Haven Hotel’s annual New Year’s Eve Masquerade.

Excited laughter filled the air, along with good music, the mouth-watering aroma of gourmet food, and dry-mouthed sensuality. Beneath it all, he heard a satisfied hum.

Jared loved that hum. It gave him a measure of satisfaction comparable only to the buzz from good champagne. Or great sex.

After five years in the hotel business, he and his brother, Tyler, had done exactly what they’d set out to do. They’d created a hedonist’s playground.

From the swanky Frank’s Bar and Asian fusion restaurant Dome on the first floor to the fourth-floor, invitation-only Salon. From the fantasy suites that were booked solid all year to the Indulgence Spa on the third floor.

Haven was a place to have fun, let loose, give in to your fantasies. The ultimate adult playground.

Nothing at all like the stuffy grandeur of his father’s hotels.

He turned, smile already in place for the luscious blonde dressed in a slinky red gown reminiscent of a Golden Age starlet. “Sorry, Jane. I’m on duty tonight.”

Jane Collins pouted her collagen-enhanced lips. “I can’t believe how much of a bore you can be when you’re having so much fun.”

Jared took a sip of champagne to stifle a laugh. Weird but true. “I’m sure there’re more than enough single men here to amuse you.”

Trailing blood-red fingernails down the front of his shirt, the twice-divorced boutique owner sighed theatrically. “Of course. But I wanted to play with you tonight.”

Jared swallowed a sharp-edged retort. His grandmother had instilled too many manners for him to deliberately brush off a lady. But tonight he refused to be tied down. Tonight was for mingling and dancing and, later, even more pleasurable activities.