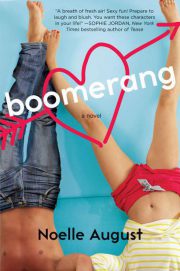 The first book in a sensational New Adult trilogy from Noelle August
Welcome to Boomerang.com, the dating site for the millennial gen with its no-fuss, no-commitments matchups, and where work is steamier than any random hook-up
Mia Galliano is an aspiring filmmaker. Ethan Vance has just played his last game as a collegiate soccer star. They’re sharp, hungry for success, and they share a secret.
Last night, Ethan and Mia met at a bar, and, well . . . one thing led to another, which led to them waking up the next morning—together. Things turned awkward in a hurry when they found themselves sharing a post hookup taxi . . . to the same place: Boomerang headquarters.
What began as a powerful connection between them is treated to a cold shower courtesy of two major complications. First, Boomerang has a strict policy against co-worker dating. And second, they’re now competitors for only one job at the end of summer.
As their internships come to an end, will they manage to keep their eyes on the future and their hands off each other, or will the pull of attraction put them right back where they started?

To Lisa, my first literary agent, my constant reader,

and my best friend. Love you, Blister.

And to Brenda, for all you do,

and for your big, gorgeous heart.

To Lolo, who wrote half of this, but still.

Q: Have you ever had a one-night stand?

On the single most important day of my life, I wake with the thought: Oh crap, where are my panties?

I think this because I also happen to wake in the bed of a stranger, with a wicked shaft of lemon-hued LA light bisecting my bare thigh and not a shred of underwear or any other garment in sight.

This is so not me, and yet here I am, tangled in warm sheets that are most definitely not my own.

Vague snippets of the night before push through my hangover-muddled brain. I remember sitting at Duke’s after my interview with Adam Blackwood, wired with anticipation and the feeling that, finally, I was set to launch. I’d be able to finish my film about Nana, turn it in, and say sayonara to college. And I’d turn this internship with one of the biggest media companies in the country into a real film career where I could find myself, find my style, not just the styles I’d been parroting during my years in school.

I almost remember the guy too. Broad shoulders, an easy manner, and that feeling of heat and possibility. But that’s about it. No face. No name. No idea how this—this minor miracle of actual real-life sex—came to pass.

Sadly, this mystery may remain unsolved. I’ve got to get going.

I struggle up, gingerly tugging strands of my curly hair from beneath the shoulder—the toned and nicely tanned shoulder—of my new friend. My head feels like the inside of a blender set to frappé, and the taste in my mouth suggests something crawled in there and died.

Swinging my bare feet onto the cool concrete floor, I rise, willing away the queasiness that threatens to grab hold.

Thanks a bunch, Patron Silver.

I creep around the bed to see if I’ll have better luck finding my underwear—or really, any item of clothing—on that side of the world. And, I’ll confess, I’m dying to take a look.

My curiosity is most definitely rewarded. Even though the guy’s face is mashed against his pillow, and his short caramel-brown hair lies matted against his head, he is about twelve kinds of hot. He has a strong, beautifully sculpted jaw with just a hint of a cleft, full lips, and the kind of dark sweeping eyelashes that girls need to gob on mascara to achieve.

Stretched out with just the barest corner of sheet covering him—my bad for hogging the blankets—his feet almost dangle off the bed. Which means he’s tall. And even in sleep, his face holds an interesting furrow-browed intensity, like he’s dreaming about saving the world. I know he has to have a stellar personality or there is zero chance I’d have woken up in his bed.

I don’t see any condom wrappers, which makes me wonder what, exactly, did happen last night. It’s definitely not like me to be reckless. So maybe nothing happened? But again: no panties.

While I puzzle over this, my glance drifts over to his bedside clock. The numbers 8:02 a.m. carve their way through the haze, and adrenaline floods my every molecule.

My internship at Boomerang—the answer to becoming more than the daughter of a famous photographer, to stepping into my real life and preserving the life of the dearest person in the world—kicks off in exactly fifty-eight minutes. And I have no idea where I am or where my frickin’ underwear went.

“Crap, crap, crap.” I push my hands through my hair, do a quick inventory of the room, and decide the clothes must have landed elsewhere.

This should be fun.

Hurrying down a narrow hall, I catch glimpses of sports photographs and motivational posters with soaring eagles and mountaintop sunrises. One says, “Life begins at the end of your comfort zone,” which means my life is definitely beginning. Right. Now.

I find myself in a living room with the expected lumpy bachelor sofa, smudged glass coffee table, and giant-screen TV that blots out the sunlight attempting to pour in through two tall Pendleton-blanket-covered windows. It’s also got the requisite single-guy funk: booze, sweat, and a kind of dead-possum tang for the kicker. Books and magazines lie scattered over most surfaces, along with a host of remote controls that suggest an underground lair somewhere; a laptop that looks old enough to belong to Fred Flintstone, and various articles of clothing—a sweatshirt, gym shorts, and—score!—my dress from last night.

I snatch it off the floor and inspect it. It’s so wrinkled it looks like a dump truck backed over it, and it’s stiff in spots, with a V-shaped stain spreading over the top.

Trying to shake out the creases, I wish I had chosen something a little less slinky for my meeting with Adam Blackwood. But I went with this, and he’ll get to see it again today. Only this time it’ll look like I wrestled it off a hobo.

I hear a creak of bedsprings and then a door opening and closing, followed by the rush of water from a shower. So, the guy’s awake. Great. Maybe he can give me a hand with Mission Impossible: Underwear Edition. There’s no way that will be awkward, right?

After searching around the entire living room, picking up clothing, pizza boxes, video game cases, and various pieces of sporting equipment, I manage to find my shoes, purse, and—draped over the kitchen pass-through—my bra. But no underwear.

Did they just disappear? Dissolve right off my body? In that case, kudos to the guy. Evan? No, that’s not it. And all the more reason to wish I could remember, oh, even a couple of minutes of last night.

The microwave clock says 8:09. I gather up my shoes, bra, and dress and race back into the bedroom. Dumping everything onto the bed, I knock on the bathroom door and push it open at the same time. Niceties went out the window sometime between my meeting with Adam Blackwood and my clothing being fired around this apartment like t-shirts at a Lakers game.

He draws back the shower curtain and pokes his head out, giving me an eyeful of chiseled torso in the process. Add in his soulful blue eyes and the water pooling in the deep grooves of his collarbone, and, well, it’s a lot to take in this early in the day.

Clearly, he feels some of that as well. His eyes make a quick circuit up and down, and then he stammers something.

Between modeling for my mother, spending eight shows a week nude in a summer stock production of Hair, and being the go-to “drop trou” girl for my fellow film students, I feel like I spend half my life naked. Am I going to spend half my life blushing and apologizing for myself? No, I am not.

His gaze sweeps over me, and his lips quirk into a smile, though he makes an excellent effort to look into my eyes when he speaks. “Definitely. Definitely okay. Do whatever you need to do.”

“Great.” I turn away and leave him to his shower. Palming the condensation off the mirror, I get a look at myself, especially at my hair, which always constitutes a situation. It frizzes out in a million directions, but it has definitely been worse. Which means, I realize with a pang of regret, that we definitely didn’t have sex after all.

Sex—good sex, anyway—makes my hair go insane. Like giant mushroom cloud insane. Right now, it’s at about Defcon Three, which suggests some vigorous making out but not much more.

I find a brush and tug it through my hair then dab a line of toothpaste onto my finger and apply it to my teeth. After that, I gargle about a half-gallon of his mouthwash and gulp down a few handfuls of water from the tap.

“Dumb question, but do you have any idea where my underwear went?”

He turns the water off and reaches an arm out for his towel, which I hand around the curtain to him. He pushes aside the striped fabric, the towel draped around his waist to accentuate an impressive contoured abdomen.

“Not sure,” he says, grinning. “Let me just put on some clothes, and I’ll help you find them.”

Back in his bedroom after a quick shower of my own, I slip on my bra and dress, feeling weirdly asymmetrical without my underwear.

“Where’s work for you?” he asks as he buttons a crisp white dress shirt.

I have a flash of him wearing a suit the night before and of snaking my arms beneath the jacket to run my hands over his strong back. He looks used to good clothes, so probably something professional. But he has a ton of sporting equipment. Maybe he’s a basketball coach. They wear suits, right?

“Where did you say you need to be?” he asks again, and I realize I’ve totally zoned.

Flushing, I say, “Century City, and I’m going to be so late.”

His hands still on the buttons. “Me too,” he mutters, more to himself than to me. “But it’s twenty minutes in good traffic. You can make it.”