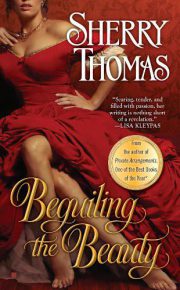 When the Duke of Lexington meets the mysterious Baroness von Seidlitz-Hardenberg on a transatlantic liner, he is fascinated. She’s exactly what he’s been searching for—a beautiful woman who interests and entices him. He falls hard and fast—and soon proposes marriage.
And then she disappears without a trace…
For in reality, the “baroness” is Venetia Easterbrook—a proper young widow who had her own vengeful reasons for instigating an affair with the duke. But the plan has backfired. Venetia has fallen in love with the man she despised—and there’s no telling what might happen when she is finally unmasked…

For my agent, Kristin Nelson, who makes everything possible

Wendy McCurdy, for her exceptional instincts and abundant patience.

Kristin Nelson, for an invaluable last-minute consultation. And for her yummy crème brûlée.

Kris Alice Hohls, for correcting all the German phrases in the manuscript—and for being wonderful.

Maili Ryan, for being the bottomless fount of knowledge she is and for her help in eradicating Americanisms from my writing. Responsibility for those that remain is solely mine for not asking her.

Joanna Chambers, for stepping in to answer questions for Maili.

Janine, for always being there, ready to help.

Ivy Adams, for being endlessly entertaining.

Tiffany Yates Martin of Fox Print Editorial, who was accidentally left out of the acknowledgment page of His at Night.

My readers, for their interest and support during my gap year from the shelves.

Deadlines being what they are, acknowledgments are always written when I’m bleary-eyed and underslept, my heart full of gratitude but my three remaining brain cells flopping about uselessly. If I’ve forgotten anyone, it is not from a lack of appreciation, but only a temporary absence of gray matter.

As always, if you are reading this, thank you. Thank you for everything.

It happened one sunlit day in the summer of 1886.

Until then, Christian de Montfort, the young Duke of Lexington, had led a charmed life.

His passion was the natural world. As a child, he was never happier than when he could watch hatchling birds peck through their delicate eggshells, or spend hours observing the turtles and the water striders that populated the family trout stream. He kept caterpillars in terrariums to discover the outcomes of their metamorphoses—brilliant butterflies or humble moths, both thrilling him equally. Come summer, when he was taken to the seashore, he immersed himself in the tide pools and understood instinctively that he was witnessing a fierce struggle for survival, without losing his sense of wonder at the beauty and intricacy of life.

After he learned to ride, he disappeared regularly into the countryside surrounding his imposing home. Algernon House, the Lexington seat, occupied a corner of the Peak District. Upon the faces of its chert and limestone escarpments, Christian, a groom in tow, hunted for fossils of gastropods and mollusks.

He did run into opposition from time to time. His father, for one, did not approve of his scientific interests. But Christian was born with an innate assurance that took most men decades to develop, if at all. When the old duke thundered over his inelegant use of time, Christian coolly demanded whether he ought to practice his father’s favorite occupation at the same age: chasing maids around the manor.

As if such nerve and aplomb weren’t enough, he was also tall, well built, and classically handsome. He sailed through life with the power and imperviousness of an ironclad, sure of his bearing, convinced of his destination.

His first glimpse of Venetia Fitzhugh Townsend only further fueled that sense of certainty.

The annual Eton and Harrow cricket match, a highlight of the London Season, had just paused for the players’ afternoon tea. Christian left the Harrow players’ pavilion to speak to his stepmother—his former stepmother, as a matter of fact, as she had recently returned from her honeymoon with her new husband.

Christian’s father, the late duke, had been a disappointment, as self-important as he’d been frivolous. He had, however, been fortunate in his choice of wives. Christian’s mother, who’d died too young for him to remember, was generally praised as saintly. His stepmother, who came into his life not long thereafter, had proved a great friend and a staunch ally.

He’d seen the dowager duchess earlier, in the middle of the match. But now she no longer stood in the same spot. As Christian scanned the far edge of the field, the sight of a young woman momentarily halted his gaze.

She was casually perched on the back of an open phaeton, yawning behind her fan. Her posture was slouchy, as if she’d secretly rid herself of the whalebone undergarments that bludgeoned other ladies to sit as stiff as effigies. But what made her stand out from the crowd was her hat—a coronet of apricot-colored feathers that reminded him of the sea anemones that had fascinated him in childhood.

She snapped closed her fan and he forgot all about sea anemones.

Her face—he lost his breath. He’d never encountered beauty of such magnitude and intensity. It was not allure, but grace, like the sight of land to a shipwrecked man. And he, who hadn’t been on a capsized vessel since he was six—and that had only been an overturned canoe—suddenly felt as if he’d been adrift in the open ocean his entire life.

Someone spoke to him. He couldn’t make out a single word.

There was something elemental to her beauty, like a mile-high thunderhead, a gathering avalanche, or a Bengal tiger prowling the darkness of the jungle. A phenomenon of inherent danger and overwhelming perfection.

He felt a sharp, sweet ache in his chest: His life would never again be complete without her. But he felt no fear, only excitement, wonder, and desire.

“Who is that?” he asked no one in particular.

“That’s Mrs. Townsend,” answered no one in particular.

The arrogance of that statement would amaze him in subsequent years—that he would hear her called a missus and immediately assume her husband to be dead. That he took it for granted nothing could possibly stand in the way of his will.

“She isn’t a widow,” he was informed. “She happens to be very much married.”

He hadn’t noticed anyone accompanying her. She appeared to him as if on a stage, alone and flooded by limelight. But now he saw that she was surrounded by people. Her hand rested casually on a man’s forearm. Her face was turned toward this man. And when he spoke, she smiled.

Christian felt as if he were falling from a great height.

He’d always considered himself a breed apart. Now he was just another sod who might yearn and strive, but never achieve his heart’s desire.

You made quite a display of yourself today,” said Tony.

Venetia hung on to the carriage strap. The brougham plodded through London’s congested streets; there really was no need to use the strap at all. But she could not seem to unclench her fingers from the strip of leather.

“One of the Harrow players couldn’t stop staring at you,” continued Tony. “If someone had handed him a fork he’d have devoured you in one sitting.”

She didn’t respond. When Tony fell into one of his moods, there was never a point in saying anything. Clouds gathered overhead. Beneath the spreading shadows, the summer leaves turned gray—nothing escaped London’s reign of soot.

“Were I less discreet I’d tell him you can’t breed. You are God’s elaborate ruse, Venetia. All that prettiness on the surface, quite useless where it counts.”

His words were drops of acid upon her heart, burning, corroding. On the sidewalk the pedestrians opened their umbrellas, held ever at the ready. Two fat plops of rain hit the carriage window. They slid down the glass pane in long, blurred streaks.

“It is not certain I can’t have children,” she said. She shouldn’t. She knew he was goading her. But somehow, on this subject, she rose to the bait every time.

“How many physicians does it take to convince you? Besides, my friends marry and within a year they already have heirs. It’s been two years for us and you show not the least sign of increasing.”

She bit the inside of her lip. The blame for their failure to procreate could just as well lie with him, but he refused to even contemplate that possibility.

“But you will be glad to know that your looks aren’t entirely useless. Howard agreed to join my rail venture—and I daresay he did so to have more opportunities to seduce you,” said Tony.

At last she looked at him. The harshness of his voice was reflected in his countenance, his once winsome features now hard and brittle. During their courtship she’d thought him impossibly appealing—funny, smart, and lit from within by a thirst for life. Had he truly changed so much or had she been blinded by love?

And if he despised Howard for wanting her, then why bring Howard deeper into their lives? They didn’t need the rail venture. Nor another source of displeasure for him.

“Are you going to betray me?” he demanded suddenly.

“No,” she said, weary almost beyond what she could bear. His contempt and dismissal of her had become a near-permanent condition of their marriage. The only thing he cared about—or so it seemed sometimes—was the matter of her fidelity.

“Good. After what you’ve made me become, being faithful is the least you can do for me.”

“And what have I made you become?” She might not be a paragon but she had been a decent wife. She saw to his every comfort, never overspent her allowance, and gave no encouragement to men like Howard.