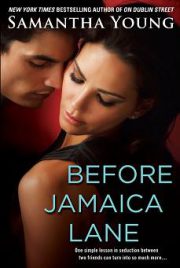 One simple lesson in seduction between two friends can turn into so much more…
Despite her outgoing demeanor, Olivia is painfully insecure around the opposite sex—usually, she can’t get up the nerve to approach guys she’s interested in. But moving to Edinburgh has given her a new start, and, after she develops a crush on a sexy postgrad, she decides it’s time to push past her fears and go after what she wants.
Nate Sawyer is a gorgeous player who never commits, but to his close friends, he’s as loyal as they come. So when Olivia turns to him with her relationship woes, he offers to instruct her in the art of flirting and to help her become more sexually confident.
The friendly education in seduction soon grows into an intense and hot romance. But then Nate’s past and commitment issues rear their ugly heads, and Olivia is left broken-hearted. When Nate realizes he’s made the biggest mistake of his life, he will have to work harder than he ever has before to entice his best friend into falling back in love with him—or he may lose her forever…

Because if it weren’t for you, Olivia might never have become a librarian … and also because I had to get the phrase ‘Let me Dewey your Decimal’ into this book somewhere …

Often I receive tweets and messages from you, including pictures of your travels to the real streets of Edinburgh. Whether you’ve been captured on film on Dublin Street or goofing around beside the London Road sign, the proof of your love for this series, its characters, and its location blows me away. If, after reading Nate and Olivia’s story, you decide to take to the streets of Edinburgh to find Jamaica Lane, I’ll make it easier for you. You see, for the sake of title continuity I took some creative license and changed the street name. Jamaica Lane doesn’t technically exist. It’s really Jamaica Street North Lane, and that’s where readers can find the wee one-bedroom flat where this next ODS couple are about to discover that life, more often than not, can take you where you least expect it …

Every time we turned a corner the icy cold wind hammered into us, almost spitefully, like it was mad when a building buffered us. Its icicle-spiked fingers pricked my rosy red cheeks and I wrapped my arms tighter around myself, my shoulders hunching as I braced against the attack.

‘For the fifth and final time … where are you taking us?’ Joss asked, burrowing deeper against her fiancé, Braden. He’d opened his wool coat and huddled her inside it, his arm wrapped around her waist, holding her close. She wore a short, stylish jacket with a red dress that fit her like a second skin. Like all of us, she was wearing stilettos. In fact, the only thing she wore that shielded her against the Scottish winter was a scarf.

Ellie and Jo were in pretty much the same condition – wearing dresses, heels, and light jackets. I was only marginally warmer in a pair of black dress pants, but my silk top and lightweight tuxedo-style blazer were doing eff all to protect me. Not quite as used to walking in stilettos as my girlfriends were, I made slower progress at the back of our group as Jo led us to our mystery destination. ‘It’s not far,’ she promised, glancing over her shoulder at us as she led the way through the city center high street. Cam, her fiancé, had his arm wrapped tight around her, keeping her as warm as possible, and behind them Braden’s sister, Ellie, and his best friend, Adam, were cuddling into each other for heat too. They were also engaged. Very recently, in fact.

I, on the other hand, did not have a fiancé to protect me from the taunting wind. ‘It’s not far?’ I scoffed at Jo. Since my arrival in Edinburgh a little over nine months ago, Jo and I had grown as close as sisters, so I felt it was okay to scoff at her after she’d dragged our asses out of Edinburgh without much explanation. Hence the poor clothing choices. ‘You lost the right to say “it’s not far” when you directed our cabs to Waverley train station.’

Jo’s apologetic smile suddenly wilted into a frown as she stopped us at a street junction. ‘Okay, I think we’re down here.’

‘Are you sure?’ I asked, my teeth starting to chatter.

‘Eh –’ Jo glanced across the street at a road sign and then pulled out her phone. ‘Just a second, guys.’

My friends huddled together and I stood back a little, taking them all in. I realized that despite how cold I was, I didn’t truly mind. I was simply content to be there with them, still surprised, even, by how close I’d grown to them. They’d accepted me so fully into their lives, partly because of Jo, but also because of Nate, Cam’s friend, and my newly adopted best friend.

As I reminisced, Nate turned around from speaking to Adam and Ellie to direct his beautiful smile my way.

I blinked, distracted by the flush of attraction I felt. I’d gotten so good at ignoring the feeling, it had caught me off guard. That was the problem when you were friends with a guy who totally got you and just happened to be the hottest man you’d ever met in real life.

That flutter, that rush of unexpected feeling, sent me reeling back to the first time Nate and I had met. Honestly, I deserved a medal for ignoring my attraction to him …

Ellie’s mom, Elodie Nichols, and her husband, Clark, had welcomed me and my dad into the fold as if we’d always been a part of their family. It was nice. It made fitting in with Jo’s friends easier. It made fitting in with Jo easier, and since my dad and I had decided to make Scotland our home, it would be good to fit into Jo’s life. She was kind of awesome. She’d also been through a really difficult time these last few years. She deserved to be taken care of, and I knew that Cam was the one person who could do that for her.

I’d let myself and Cole into Cam’s apartment. While he and Jo were at the store getting snacks, I’d decided to take Cole off their hands and give them some time together. That night we were all planning to hang out with Cam’s friends Nate and Peetie, whom I’d be meeting for the first time, and I thought it would be a nice thing to give Jo and Cam some alone time before their friends appeared. As soon as I’d let us in the door, Cole headed straight for the game console in the sitting room while I headed to the back of the apartment. In the kitchen I puttered around, finding bowls and plates for the snacks. I was just washing the dishes when a low, Scottish, and very masculine voice said, ‘Eh … you’re not Cameron.’

When I whirled around to face the intruder, any words that might have descended from my brain to my tongue tripped up at the bottom of that staircase and suffered a concussion.

Leaning against the doorjamb, his arms crossed over his chest, was the sexiest man I’d ever seen.

He quirked an eyebrow at my speechlessness. ‘Has someone pressed your mute button?’

That was funny, so I managed a semi-deranged smile as I drank him in. My eyes roamed him from head to toe, and as I took in all his glory I felt this funny little dip low in my belly, so low it was quickly followed by a shock of aroused tingles between my legs.

Desperately trying to ignore the tingles and failing, I attempted to force myself through the arousal and my shyness to interact with the stranger. The stranger who I was guessing was Nate. Jo had told me all about Cam’s super-hot friend Nate. She had not exaggerated.

Movie-star gorgeous, Nate had a natural tan that you just didn’t expect from a Scottish person, and eyes so dark they were practically black – though right now they were glittering with mischief. He was smiling too, showing off a pair of sexy dimples and perfect white teeth. All this plus a straight, strong blade of a nose, lips I was staring unashamedly at because they reminded me of a certain swarthy, off-the-wall actor’s, and from what I could see of the lean, muscled biceps revealed by the T-shirt he wore, the guy was also roped.

Miracle of miracles, his T-shirt actually distracted me from his muscles.

It had the words RESISTANCE IS FUTILE printed across it.

The paralyzing shyness that usually took me over when I was faced with a hot guy melted into the background as I burst out laughing. ‘Consider yourself one of the Borg, do you?’ I gestured to his T-shirt, which referred to the catchphrase of an alien race on Star Trek.

He glanced down at the words, seeming surprised. When he lifted his gaze to me again his dark eyes were smiling. ‘You got that reference? Most women think I’m being a cocky bugger.’

I laughed even harder, leaning against the kitchen counter. ‘I imagine it’s a little bit of that too. And you can understand their mistake. You don’t look like a Star Trek fan.’

Something sharpened in his eyes, something intense. I shivered as he lazily ran his gaze down my body and back up again. His voice was lower, thick, as he replied, ‘Neither do you.’

That intent look felt like a slow caress. If I was anybody else I’d think he’d meant to make me feel like that.

Still … my breath caught. The air felt suddenly too thin, broken by this weird electricity between us that I didn’t quite understand.

‘Are you one of Jo’s friends?’

I struggled to fight the shyness that was starting to creep in again. ‘Didn’t Cole tell you?’

‘Peetie went in to see the wee man. I wanted a drink, so I came straight to the kitchen.’ His eyes were devouring me again, and apparently my body had been asleep until his eyes touched it because there was a whole lot of tingling, shivering, and overheating going on. ‘Definitely the best choice I’ve made in a while.’

Nate’s eyebrows lifted and then he abruptly cleared his throat, his body jerking upright from the doorjamb. Just like that, the air in the room began to return to normal. ‘You’re Olivia? Of course. The accent. Of course.’

I nodded, confused by his reaction. ‘I’m guessing you’re Nate?’