Главная / Современные любовные романы / Be with Me 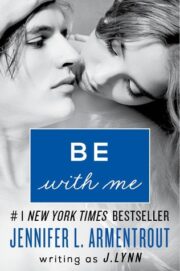 J. Lynn - Be with Me краткое содержание

Teresa Hamilton is having a rough year—she’s in love with her big brother’s best friend, but he hasn’t spoken to her since they shared a truly amazing, mind-blowing, change-your-life kiss. She got out of a terrible relationship. And now an injury is threatening to end her dance career for good. It’s time for Plan B – college. And maybe a chance to convince Jase that what they have together is real.
Jase Winstead has a huge secret that he’s not telling anyone. Especially not his best friend’s incredibly beautiful sister. Even though he and Teresa shared the hottest kiss of his life, he knows that his responsibilities must take priority. He certainly doesn’t have time for a relationship. But it doesn’t help that all he can think about kissing the one girl who could ruin everything for him.
As they’re thrown together more and more, Jase and Tess can’t keep denying their feelings for each other. But a familiar danger looms and tragedy strikes. As the campus recovers, the star-crossed couple must decide what they’re willing to risk to be together, and what they’re willing to lose if they’re not…

Be with Me - читать книгу онлайн бесплатно, автор J. Lynn

Dedicated to my brother, who shares a birthday with Be with Me release day.

Sweet tea was apparently going to be the death of me.

Not because the amount of sugar could send you into a diabetic coma after one slurp. Or because my brother had nearly caused a triple-car pileup by winging his truck around in a sharp U-turn after receiving a text message that contained two words only.

Nope. The request for sweet tea was bringing me face-to-face with Jase Winstead—the physical embodiment of every girlie girl fantasy and then some that I’d ever had. And this was the first time I was seeing him outside of campus.

And in front of my brother.

Oh sweet Mary mother of all the babies in the world, this was going to be awkward.

Why, oh why, did my brother have to text Jase and mention that we were on his end of town and ask if he needed anything? Cam was supposed to be taking me around so I could get familiar with the scenery. Although the scenery I was about to witness was sure to be better than what I’d seen so far of this county.

If I saw another strip club, I was going to hurt someone.

Cam glanced over at me as he sped down the back road. We’d left Route 9 years ago. His gaze dropped from my face to the tea I clutched in my hands. He raised a brow. “You know, Teresa, there’s a thing called a cup holder.”

“Okaaay.” He drew the word out, focusing on the road.

I was acting like a spaz and I needed to play it cool. The last thing anyone in this world needed was Cam finding out why I had a reason to act like a dweeb on crack. “So, um, I thought Jase lived up by the university?”

That sounded casual, right? Oh God, I was pretty sure my voice cracked at some point during that not-so-innocent question.

“He does, but he spends most of the time at his family’s farm.” Cam slowed his truck down and hung a sharp right. Tea almost went out the window, but I tightened my death grip on it. Tea was going nowhere. “You remember Jack, right?”

Of course I did. Jase had a five-year-old brother named Jack, and the little boy meant the world to him. I obsessively remembered everything I’d ever learned about Jase in a way I imagined Justin Bieber fans did about him. Embarrassing as that sounded, it was true. Jase, unbeknownst to him and the entire world, had come to mean a lot of things to me in the last three years.

And the source of my crush.

But then a year ago, right at the start of my senior year in high school, when Jase had tagged along when Cam had visited home, he’d become something very complicated. Something that a part of me wanted nothing more than to forget about. But the other part of me refused to let go of the memory of his lips against mine or how his hands had felt skimming over my body or the way he had groaned my name like it had caused him exquisite pain.

My cheeks heated behind my sunglasses at the vivid memory and I turned my face to the window, half tempted to roll it down and stick my head out. I so needed to pull it together. If Cam ever discovered that Jase had kissed me, he would murder him and hide his body on a rural road like this one.

And that would be a damn shame.

My brain emptied of anything to say, and I so needed a distraction right now. The perspiration from the tea and my own trembling hands was making it hard to hold on to the cup. I could’ve asked Cam about Avery and that would’ve worked, because he loved talking about Avery. I could’ve asked about his classes or how he was back in training for United tryouts in the spring, but all I could do was think about the fact that I was finally going to see Jase in a situation where he couldn’t run away from me.

Which was what he’d been doing the first full week of classes.

Thick trees on either side of the road started to thin out, and through them, green pastures became visible. Cam turned onto a narrow road. The truck bounced on the potholes, making my stomach queasy.

My brows lowered as we passed between two brown poles. A chain-link fence lay on the ground, and off to the left was a small wooden sign that read WINSTEAD: PRIVATE PROPERTY. A large cornfield greeted us, but the stalks were dry and yellow, appearing as if they were days away from withering up and dying. Beyond them, several large horses grazed behind a wooden fence that was missing many of its middle panels. Cows roamed over most of the property to the left, fat and happy looking.

As we drew closer, an old barn came into view—a scary old barn, like the one in the Texas Chainsaw Massacre, complete with the creepy rooster compass thing swiveling on the roof. Several yards beyond the barn was a two-story home. The white walls were gray, and even from the truck, I could tell there was more paint peeling than there was on the house. Blue tarp covered several sections of the roof, and a chimney looked like it was half crumbling. Red dusty bricks were stacked along the side of the house, as if someone had started to repair the chimney but grew bored and gave up. There was also a cemetery of broken-down cars behind the barn, a sea of rusted-out trucks and sedans.

Shock rippled through me as I sat up a bit straighter. This was Jase’s farm? For some reason, I pictured something a little more . . . up to date?

Cam parked the truck a few feet back from the barn and killed the engine. He glanced over at me, following my stare to the house. Unlocking his seat belt, he sighed. “His parents had a really hard time a few years back and they’re just now getting on their feet. Jase tries to help with the farm and stuff, but as you can see . . .”

The farm needed more help than Jase could provide.

Cam laughed. “That’s nice of you to say.”

My fingers tightened around the cup in defense. “It is.”

“Uh-huh.” He flipped his baseball cap around, shielding his eyes. Tufts of black hair poked out of the back rim.

I started to speak, but movement I saw out of the corner of my eye caught my attention.

Racing out from the side of the barn, a little boy seated in a miniature John Deere tractor hooted and hollered. His chubby arms were bone straight as his hands gripped the steering wheel. A mop of curly brown hair shone under the bright August sun. Pushing the tractor from behind was Jase, and even though I could barely hear him, I was sure that he was making engine noises. They bounced along the uneven gravel and ground. Jase laughed as his little brother shouted, “Faster! Go faster!”

Jase appeased his brother, pushing the tractor so it zigged and zagged to a stop in front of the truck as Jack squealed, clenching the steering wheel. Plumes of dust flew into the air.

And then Jase straightened.

My mouth dropped open. Nothing in this world could’ve made me look away from the splendor before me.

Jase was shirtless and his skin glistened with sweat. I wasn’t sure what ethnicity he had in his family background. There had to be something Spanish or Mediterranean, because he had a natural tan skin tone that remained that way all year-round.

As he walked around the tractor, his muscles did fascinating things—rippling and tightening. His pecs were perfectly formed and his shoulders were broad. He had the kind of muscles one got from lifting bales of hay. Boy was ripped. His stomach muscles tensed with each step. He had a very distinctive six-pack. Totally touchable. His jeans hung indecently low—low enough that I wondered if he had on anything underneath the faded denim.

It was the first time I ever saw the full extent of his tattoo. Ever since I’d known him, I’d caught glimpses of it peeking out from the collar on his left shoulder and from under a shirtsleeve. I never even knew what it was until now.

The tat was massive—an endless knot shaded in deep black, starting at the base of his neck, looping and twisting over his left shoulder and halfway down his arm. At the bottom, two loops opposite each other reminded me of snakes curling up and facing each other.

It was a perfect fit for him.

A flush spread across my cheeks and traveled down my throat as I dragged my gaze back up, mouth dry as the desert.

Sinewy muscles in his arms flexed as he lifted Jack out of the driver’s seat, holding him into the air above his head. He spun around in a circle, laughing deeply as Jack shrieked and flailed.

As Cam opened the driver’s door, Jase sat Jack down on the ground and yelled at my brother, but I had no idea what he said. He straightened again, dropping his hands onto his hips. His eyes squinted as he stared into the truck.

Jase was absolutely gorgeous. You couldn’t say that about a lot of people in real life. Maybe celebrities or rock stars, but it was rare to see someone as stunning as he was.

His hair, the color of rich russet, was a mess of waves falling into his face. His cheekbones were broad and well defined. Lips were full and could be quite expressive. A hint of stubble shaded the strong curve of his jaw. He didn’t have dimples like Cam or me, but when he did smile, he had one of the biggest, most beautiful smiles I’d ever seen on a guy.