Главная / Современные любовные романы / Be Careful What You Wish For 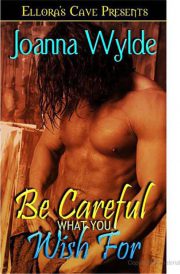 Joanna Wylde - Be Careful What You Wish For краткое содержание

Sandra is having a bad day.Her business is tanking and her latest therapeutic massage client, Edgar, thinks she’s a whore. But even that pales in comparison to what happens when she goes into the bathroom to wash her hands.Sean’s spent the last five years in prison for murder. When he escapes, he wants two things—revenge and sex. He finds both at the office of Edgar Williams, the man responsible for the deaths of his team members. Now Edgar’s dead, but Sean’s still horny. Fortunately, the woman of his dreams is about to walk out of the bathroom and into his arms.Note: This story was previously available in the Forgotten Wishes anthology.

Be Careful What You Wish For - читать книгу онлайн бесплатно, автор Joanna Wylde

BE CAREFUL WHAT YOU WISH FOR

Sandra rubbed her hands together vigorously, letting the soap cut through the remnants of the massage oil.

The cheap bastard probably wouldn’t even pay her, not that she expected it. That’s what she got for agreeing to do a private appointment with a new client. At the time it seemed like a dream come true.

Edgar Williams’ secretary had said her boss was desperate, had even offered to pay twice her fee.

Of course, for what he seemed to believe a massage therapist did for a living, her price was a steal. She could still feel his fat, hairy fingers gripping her ass. Why on earth would a man like that think money could possibly be enough to make her have sex with him? She’d rather be eaten by a snake!

The pipes made a moaning noise as she shut off the faucets, and she wrinkled her nose. For a couple of lawyers, Edgar and his partner didn’t seem to make much. Their office was nothing more than an old, converted house, and it was a dump. She grabbed at the towel to wipe her hands and shuddered as her fingers hit crust. Yuck. She wiped them on her jeans instead, then turned and opened the door.

“I’m out of here. You should be ashamed of yourself, Williams,” she declared as she stalked out of the bathroom into the office. “I have every intention of reporting you to the Better Business Bureau—”

Her voice cut off abruptly as she took in the scene before her.

Edgar stood frozen, facing a tall shadow of a man. Neither spoke.

“What’s going on here?” she asked. The shadow stepped forward into the light. He was big, a man who had clearly spent a lot of time lifting weights. The clothes he wore fit poorly, as if they made for a smaller man. His long, black hair was pulled back in a ponytail and his face seemed chiseled in ice. His arm moved, catching her eye.

Something glinted in his hand. Shit. It was a knife.

“You aren’t supposed to be here,” he said to her slowly, his voice so low she strained to hear it. “I’m sorry you have to be a part of this.” Her eyes flew to his face, meeting a cold gaze. What the hell?

“Give me one reason I shouldn’t kill you, too,” he continued, watching her closely. “I’m here for Edgar, and I hardly figured he’d have a piece like you around. What should I do with you?”

Her heart seemed to stop beating.

“I don’t even know this guy,” she whispered. “Just let me go. I won’t tell anyone anything. I don’t want to be a part of this.”

“How stupid do you think I am?” he asked softly, eyes slipping down her still form. “You’ll scream bloody murder if I let you go. You’ll have to, or they might pin his death on you. In fact, I think I like that idea. You’re a masseuse, right? I thought guys had to go to special parlors to find women like you. A call girl is the perfect murder suspect.”

His mouth twisted, giving the word “masseuse” an ugly connotation. She stiffened.

“I’m a licensed massage therapist,” she said. “I went to school for a long time to learn my craft, and I’ve helped heal a lot of suffering people.”

“Shut up, bitch, nobody cares,” Edgar muttered. “Sean, you don’t have to kill anyone. I’m willing to work with you. We can make things right between us.”

“It’s too late for you Edgar,” Sean said. “I’m touched by your concern for your girlfriend, though.”

“I’m not his girlfriend,” Sandra said firmly. She edged slowly into the room, trying to control the shaking of her legs. Sean stepped toward her, eyes trailing across her body once more.

“I could use some of that licensed healing,” he said, the words sounding dirty. He dropped one hand slowly to his crotch, and cupped himself. Her eyes followed his hand, noticing a large, long ridge beneath his pants. Edgar shot her a glance and sidled to one side of the room. Maybe he had an idea? Not likely, but she couldn’t bring herself to give him away by following him with her eyes.

“Are you going to kill me?” she asked, letting her voice go soft. She straightened her shoulders, pushing her breasts out. If Edgar needed a distraction to help rescue them, she was ready and willing to help out.

Thankfully her T-shirt had a scoop neckline. Now if only she had some more cleavage…

“Not right away,” Sean murmured, running his hand slowly up and down the length of his erection. Out of the corner of her eyes she saw Edgar slip through the door. What was he doing? He was supposed to thump the bad guy over the head while she distracted him, not run away. “Not before I’m done with you.

I haven’t had a woman in a hell of a long time. You look just like a ripe peach to me, all soft and filled with juices.”

A bolt of lightning flashed, followed by a loud clap of thunder. Edgar bolted down the hallway.

“Edgar, you bastard!” she screamed. Sean spun around, giving out a mighty bellow of anger. Sandra looked around desperately for some kind of weapon. The closest thing she could see was a wooden chair. She picked it up and brought it crashing down across the back of his head. He staggered to one side and she pushed past him out the door. She could hear his muttered curses as she ran down the hall, through the living room that masqueraded as a waiting room, and out the front door. There was no sign of Edgar. She jetted across the wet pavement toward her aging hatchback and fumbled in her jeans pocket for the keys. Where were they?

She’d left them inside.

A noise came from behind; he was coming. She needed to get away.

She took off down the street, passing boarded-up houses and small, closed businesses. Nine at night, and the entire block had shut down. Why had she agreed to an evening appointment in this part of town?

It was a cesspit, dangerous for a woman alone.

She could hear his footsteps thudding behind her. Damn, he was fast.

Lightning flashed again; rain burst from the sky, hitting the pavement in splatters. Within seconds she felt it soaking her hair and her T-shirt. She slipped and almost went down, but managed to flail her arms and pull herself back upright.

He was gaining on her. She wouldn’t be able to outrun him.

She turned a corner and a light called to her from a storefront diner? She put on an extra burst of speed and started toward it. Not fast enough. His fingers caught the back of her T-shirt, ripping at it viciously.

She almost went down, but she managed to keep to her feet, somehow tried to keep moving. Maybe she could rip the shirt and get away…

He jerked back on the fabric. Hard. She choked, falling backwards, hitting the ground with such force that she couldn’t breathe. He rolled onto her, roughly covering her mouth with his hand.

“You aren’t getting away just yet, little girl,” he said, his voice low and menacing. “I’ve worked too hard for this to let you fuck it up. Edgar will keep his mouth shut, he’ll be too scared not to. You’re another story.”

Oh, she was scared all right. She choked back a sob, wishing desperately that she hadn’t taken the appointment. What had she been thinking?

He lay on top of her for several tense seconds as her pulse pounded in her ears. Her chest heaved against his, the hard points of her nipples flattened against his muscles. Nothing about him gave even an inch of space. She opened her mouth, gasping against his hand for air. She couldn’t get a deep breath.

One small part of her mind registered he wasn’t breathing hard at all. Bastard.

“I’m going to let you up slowly,” he said, whispered in her ear. His breath seemed hot, menacing. “You need to keep your mouth shut. If you don’t, I’ll kill you. If you do exactly what I say, you may have a chance to live. Do you understand?”

She nodded her head, her gaze darting toward the diner. Why didn’t anyone see her? Sure, it was dark and wet, but they were right in the middle of the street. Didn’t they realize she needed help?

“Look at me,” he said. “Convince me that you understand.”

She turned her eyes toward him, getting a good look at the man for the first time. Pale blue eyes met her gaze, so pale they seemed unnatural. Witch eyes, she thought, shuddering. They bore through her without a trace of warmth, two orbs of ice penetrating her soul.

“Are you going to make any noise?” he asked slowly.

She shook her head as well as she could, meaning it. She had no doubt that he’d kill her if she didn’t obey. Not that he’d enjoy it, she thought. Killing her would be no more than swatting a fly to him. He wouldn’t think twice about it.

“You keep quiet and stay next to me,” he said. “If we run into anyone, you agree with everything I say.”

She nodded, and then he leaned up on one arm. The movement pushed his hips down into her, and to her horror she felt something press against her. That same bulge she’d seen before, only much bigger. He wanted her.

Her startled gaze flew to his face again.

“If you’re good, I’ll keep you around for a while,” he said slowly. “You might have all kinds of uses.”

With that he let her go, pushing himself to his feet and then pulling her up roughly beside him. He grabbed her upper arm and marched her down the street toward Edgar’s office. As they walked, a van pulled up next to them, and for one shining moment hope filled her heart. Then the door slid open, and a black man with eyes as dead as her captor’s looked at them.