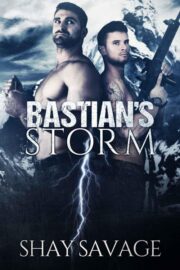 Sebastian Stark just isn’t cut out for normal life with a girlfriend in the hot and humid city of Miami. All in all, he’d rather be back on the island where it was just the two of them, and he could keep everything in balance. The bar down the street tempts him daily, but he’s determined to remain strong. Adjusting to normal life is difficult, but Bastian is doing his best to keep himself together and the nightmares away. Raine’s happy, and that’s what matters to him the most.
But not all nightmares can be driven away.
When Bastian’s former mentor comes into the picture and presents him with an ultimatum, Bastian slips into old habits. Though he wants to shield Raine from the truth, the shady circumstances of his past form into a hurricane he can’t control. In an effort to protect her, Bastian has no choice but to throw himself back into his old job – death match tournaments – just one last time.
Dropped into the arctic wilderness with weapons loaded, Bastian has to compete against representatives from major crime lords all over the states. He’s studied his competition, he knows their weaknesses, and he’s ready to battle for the woman he loves. There’s only one opponent in the mix that causes him any concern. In order to guarantee Raine’s safety, Bastian will be pitted against the key hit man for Chicago’s largest mob family – a guy who’s known as one hell of a shot.
A guy named Evan Arden.

This book is for Sue. You are a true teacher in heart and mind, and I can’t begin to list everything I have learned from you. I am eternally grateful for your dedication to my work, friendship, and generous hospitality.

A giant thank you to the wonderful group of people who constantly encourage me, keep me going, and ultimately make sure what everyone reads is quality work: Adam, Candise, Chaya, Heather, Holly, Ian, Jada, Tamara, and of course, everyone on my street team!

Special thanks for all the Surviving Raine fans out there who waited (somewhat) patiently for the continuation of Bastian and Raine’s story! You are the reason I write.

I didn't bother to wait until I got outside before I lit my cigarette. The sheer number of people who had shown up for the castaways’ welcome home media circus was insane. Maybe I couldn't get trashed like I wanted to, but I still needed some kind of silent fuck you to everyone there. Lighting up before I got to the door was all the obnoxiousness I could manage.

Outside, I leaned against the railing surrounding the patio area. I had no idea if I was in a smoking area or not, and I didn't give a shit. There wasn't anyone else out here anyway. They were all inside, monopolizing Raine's attention.

Somewhere inside my screwed up brain, I knew I was being ridiculous. I didn't care how ludicrous I was, but I still recognized it. When we had been alone on a life raft in the middle of the Caribbean Sea and then on a deserted island together, I'd had her all to myself. Now press people and some asshole congressman who was pursuing the vice presidency next year surrounded her. Sharing wasn't my strongpoint. I’d already shared one woman in my life, and I wasn’t going to do that again.

Logic was irrelevant. Knowing Raine wasn't the same kind of person as Jillian didn't matter when it came to my paranoia. Jillian had taken my trust, used it, and destroyed me with it. She’d taken my unborn child and run away with another man.

I took a long drag off the cigarette and blew smoke up into the air. I watched it dissipate in the warm Miami night and considered just what the fuck I was going to do from here on out. There was no going back to how things were. Raine was so fucking happy being back in civilization again, and though her happiness meant everything to me, all I could think about was the open bar back inside the reception hall and how easily I could sneak in, grab a shot of vodka, and sneak back out to the patio without anyone seeing me. Such is the mindset of a recovering alcoholic.

Was that what I was now?

Was that what defined me?

Fuck if I knew. Raine had made it perfectly clear that it was her or the drink, and the decision was—on some level, at least—a simple one. Vodka was something I desperately, desperately wanted, but I couldn’t live without Raine.

A slight scraping sound behind me and to the left brought me from my thoughts. When I turned to look, the cold blue eyes that met mine were unmistakable.

Every cell inside my body went on high alert like a decompression alarm in an airplane. All the oxygen seemed to evacuate my lungs, and there weren’t any masks in the area to secure around my head.

Inside his gaze, I could practically see the words forming in his mind. I was unfocused. I hadn't heard him approach. I was unaware of my surroundings, vulnerable, and stupid. The scraping sound from his foot was completely intentional. He could have killed me where I stood, buried in my own thoughts.

“Sebastian,” he said with a slight raise of his left eyebrow.

All my flight-or-fight impulses went into high gear. I couldn’t seem to find any words, didn’t have anywhere to run, and was pretty sure I wasn’t prepared for a fight against the man who taught me everything I knew about how to kill people. With what little breath I had inside of me, I took another draw on the smoke and tried to look nonchalant.

“Landon,” I replied, but my voice choked slightly; the smoke in my lungs got caught, and I started coughing. I nearly doubled over as the unfamiliar, overly-processed tobacco and nicotine—something I was no longer used to having in my body—ravaged my system and left me gasping.

As I recovered, Landon just watched me with a bemused look.

Landon’s smirk widened, but he didn’t laugh out loud. He never really did.

There are certainly some people who would have considered his remark a compliment, but I knew exactly what he meant. I wasn’t as big as I had been—I’d lost muscle even before being stranded at sea—and his words held a slight tone of challenge: less muscle, less power. He was calling me weak, and I couldn’t argue with him.

“Living off fish and seaweed will do that to ya,” I said. I was still trying for nonchalant, but I didn’t think I was effective. Landon was still looking at me with his half-grin and raised brow. I tried to pull off a shrug, but it wasn’t working. I looked back to the cigarette perched between my fingers, but it didn’t seem to have any advice for me.

“You finally let someone in,” Landon commented.

I moved my eyes quickly to his as he motioned towards the door leading back inside—back to Raine. My chest tightened, and I wondered just how long he had been in the vicinity and what he might have seen and realized.

Since I first opened my mouth and told Raine about my sordid past, I knew I was putting her in danger. At the time, I had been reasonably convinced it didn’t matter. I didn’t think we’d ever make it back to the mainland and other people again.

“What did you tell her?” he asked as he stepped forward and lowered his voice.

“Everything,” I heard myself whisper.

Landon nodded slowly. I had only confirmed what he already suspected.

As I held my breath, he moved closer, turned, and leaned against the railing beside me.

“I should probably kill you both,” he said with a minute sigh. He turned his head toward me. “You know I don’t want to do that.”

Had he talked to Joseph Franks? Did the Seattle mob boss know where I was and what I was doing? He had to; we had been all over the news since we’d been found. They had even included my real name and my connection as a squealer with the crime lord.

“Leave her alone,” I said quietly. “Do whatever the fuck you want with me, but don’t touch her.”

What should have been a threat came out as nothing more than a desperate appeal. I turned toward him, tossed my smoke to the ground, and tried to stand up a little straighter. I had several inches on him in height, but I always felt small in his presence.

He stared back at me with his ice-blue eyes.

“Not necessarily my decision,” he said.

“Have you talked to him?” I asked quickly. I didn’t need to name Franks; he was a given.

“Not since you resurfaced,” Landon said. “It’s only a matter of time.”

Landon tilted his head to one side but didn’t comment.

I looked into his eyes, and for a moment, they softened uncharacteristically. In that instant, he was the father I never had and I, the prodigal son. His chest rose and fell slightly as he breathed deep and considered me.

“I tried to keep you out of the light,” he said. If I didn’t know him better, I could have sworn there was a hint of remorse in his voice. He shook his head slowly. “You had to go and get yourself on the fucking news. Damn, Bastian—how am I supposed to cover that up? You’re out in the open, sober, and hooked up with the daughter of Henry Gayle. Do you really think he’s going to ignore that?”

“I didn’t fucking do it on purpose!” I growled.

“Do you think that matters?” Landon took a step closer to me, his eyes cold again. “Do you think that changes anything? In the eyes of the cops, you’re a potential source for more information. In the eyes of Franks, you’re a potential threat. You knew that the minute you walked up to the Seattle PD and told them about that night. You told them he’d killed two cops, and since then, I have done everything I possibly could to keep you hidden, to keep you alive.”

He shook his head slowly.

“And now you come back like this? With her?”

I could practically hear my own heart beating.

Landon rolled his eyes, and I reached out and grabbed his forearm.

“You can convince anyone of anything,” I said. “Tell him I’m not a threat. Tell him I’ll behave. I swear to God, Landon-”

“You don’t believe in God,” Landon interrupted, shaking his arm free of my grip.

“Then I’ll swear on whatever the fuck you want,” I snarled back. “I’ll do anything—just keep him away from her.”

Landon stared at me with his stoic and intense eyes.

“He’s going to want you to fight,” he said. “Prove your loyalty again.”