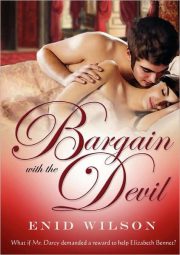 In Jane Austen’s Pride and Prejudice, Fitzwilliam Darcy learns of the debacle involving Elizabeth Bennet’s sister several months after he was rejected by Elizabeth, and volunteers to help find her sister, of his own accord.
But what if Miss Elizabeth had requested Mr. Darcy’s aid in just a few days after the disastrous proposal at Hunsford, and he was still very angry with her refusal? What if he decided to be ungentlemanly, and demanded a very particular reward from her in exchange for his assistance?
This steamy, funny Pride and Prejudice what-if short story explores that scenario with wit, emotion and intriguing plot twists that take this perennial favorite to another direction.

Bargain With the Devil

Jane Austen, thank you for creating these wonderful characters

Enid Wilson loves sexy romance. Her writing career began with a daily newspaper, writing educational advice for students. She then branches out into writing marketing materials and advertising copies. Enid’s first paranormal novel In Quest of Theta Magic, received several top reviews. Enid can be contacted at enid.wilson28@yahoo.com.au or www.steamydarcy.com

Elizabeth Bennet strolled slowly past a line of elegant townhouses in a fashionable area in London for the second day in a row, a maid following a few steps behind her. She knew that, unlike her normal joyful countenance, her face must look pale and agitated. Then, suddenly, her spirits brightened. Increasing her pace, she walked almost directly into the path of a tall gentleman.

“Pray forgive me! I was not looking where I was heading. It was a lovely day and I was hoping to shop at Bond Street but I could not resist taking a walk to admire the lovely townhouses in the area.”

“How long have you been in London, Miss Bennet?”

“Where are you staying?”

“But of course. I… am walking to my club. Is your family in good health?”

Elizabeth walked closer to him and lowered her voice. “I fear we are very ill indeed, Mr. Darcy. May I interrupt your day and request a more private meeting with you, in the park around the corner?”

She saw his eyes widened. He nodded his head and said, for the benefit of the footman and maid who looked on, “Miss Bennet, it was a pleasure to meet you in London again. May I escort you to Bond Street through the park?” He then offered her his arm.

“My pleasure,” she replied and gave him a small smile. When she put her hand on his arm, she could feel the strength and the warmth of his arm, even through the thick coat. She shivered.

“Are you cold, Miss Bennet?”

Mr. Fitzwilliam Darcy cast her a look. They walked on silently while her maid followed.

“Should we take a rest over there?” He asked at last.

His deep voice startled Elizabeth from her dark thoughts. With a sigh, she took a seat at a bench under a large Chestnut tree. He sat down, as well, at the far end of the bench, while her maid wandered farther.

The park was small, and there were few people present, due no doubt to the early morning hour.

Elizabeth gathered her thoughts. “Mr. Darcy, pray excuse my impertinence for requesting this private meeting with you.”

He did not reply but turned slightly to glance at her.

Bracing herself, Elizabeth began. “I would like to apologise for abusing you so abominably to your face in Hunsford, all the more so because my behaviour was based on untrue facts. I am truly ashamed of myself. My actions were blind, partial, prejudiced and absurd.”

“Pray allow me to continue, Mr. Darcy. Vanity has been my folly. From the very outset of our acquaintance, I was pleased with the preference of Mr. Wickham, and offended by your seeming neglect. I have courted prepossession and ignorance, driving reason away where either of you were concerned. Till the moment I read your letter, I never knew myself.”

“And now, the most dreadful circumstance has overtaken our family.” Tears sprang to her eyes despite her determined efforts to compose herself. “My younger sister, Lydia, has left all her friends, and has eloped, throwing herself into the power of…of Mr. Wickham.”

For a terrible instant, Darcy appeared fixed in astonishment. Then he stood up and paced before her. “How did it happen?” he prompted tersely.

Elizabeth drew a steadying breath, determined to respond in as controlled a manner as possible. “The militia left Meryton about the same time as I left for Hunsford. My sister Lydia was invited by Colonel Forster's wife to stay with her for a few weeks. Lydia left Brighton together with Mr. Wickham on Sunday night, and they were traced almost to London, but not beyond.”

“My father is here in London. He has been trying to find her for the past three days, with my uncle’s assistance. He sent for me from Kent at the same time. That was the reason I requested this meeting. You have known Mr. Wickham since your youth. I beg for intelligence to help us in our search.”

Mr. Darcy made no answer. He continued to pace for a while, then stopped and looked sharply at her.

“And what would be my reward for helping you?” He asked at last.

It was Elizabeth’s turn to widen her eyes. “Reward? I am appealing to your gentleman’s nature to help a family in distress.”

He laughed coolly. “As I recall, you stated yourself that I had a selfish disdain for the feelings of others, and that I was no gentleman. Why would such a man help a family in distress without some reward in view?”

Elizabeth's trembling voice faded. Standing abruptly, she said to him coldly, “It was a mistake for me to beg you for intelligence. Mr. Darcy, pray forgive me for interrupting your day.”

She began to walk away, but he grabbed her arm and prevented her retreat. “Sit down, Miss Bennet. You can ill afford to be missish when I can help you recover Miss Lydia and force Wickham to marry her.”

She stared at him in disbelief. “You cannot seriously suggest that I would trade my virtue for it. How can you believe that I would corrupt the reputation of our family just to save it from another form of ruination?”

“You are so certain that I demand you to sell your soul?”

Elizabeth faltered. “But…if you are not asking me to be your…your mistress, pray tell what other reward were you hoping for?”

Maddeningly, he spread his hands. “In truth, I did not have a specific goal in mind when I asked. I was simply inquiring. But since you are already thinking in that direction…”

“Mr. Darcy! Pray do not toy with me,” she protested, her throat aching with distress. “My family is in ruin. I have no heart for playing such games with you.”

“So, you admit that you were always playing games with me, in the past? Was that why you thought that the pain of your rejection would be of only short duration? You thought I was devoid of true feelings in the matter?”

“I have apologised for hurting you…”

“No, you have only apologised for abusing me to my face. You did not take my feelings seriously when you refused my offer, nor have you indicated that you do so even now, with your apology.”

“Sir, if you want me to apologise for hurting your feelings…”

“There is no point in an apology if the need for issuing one did not even occur to you before I mentioned it.”

“What do you want then? I cannot conceive that you would want me as your wife now, even if you should offer your support to us, for you must realise that I would be a sister to Mr. Wickham. Moreover, you have just stated that you do not want me as your mistress – not that I would agree to such a situation in any event. So tell me, please, what kind of reward you could possibly have in mind, considering that you know my family not to be in any way capable of offering financial recompense to you."

His shoulders lifted fractionally and fell. “I do not know yet. Can we not simply agree that you will owe me some reward if I succeed in finding your sister? I can promise that I shall not offer you the arrangement of a mistress. Other than that, I would consider myself at liberty to ask you to do whatever I wish, as reward.”

“But that is the vaguest term of agreement! What if you should request that I do something immoral?”

His face was stern with offended pride. “Is your opinion of me so low that you believe me capable of asking you to do something immoral? If so, I am grieved indeed.”

Cheeks aflame, she protested, “No, sir, I am not saying that I believe you would. But surely we should not enter a bargain without the clearest terms in mind.”

“You are a worthy opponent in negotiation. How, then, does this suit you? I shall bring my sister to walk in the park tomorrow, at the same hour as today. At that time, I shall introduce her to you so that I may contact you through her, thereafter, without raising undue suspicion.” He raised a single brow. “And I shall wait to name my reward until after I have succeeded in arranging for Wickham to marry your sister.”

“What, then, if I refuse to grant your reward?”

His expression hardened. “Then I will simply undo the arrangements.”

Elizabeth gasped. “But that is no negotiation at all, if I do not have the right to refuse!”

“You cannot refuse. You can, however, negotiate.” Darcy’s dark gaze challenged her. “So then, do we have an agreement?”

Returning his glare, she nodded reluctantly.

The following day, true to his agreement, Mr. Darcy and his sister encountered Elizabeth. "Miss Bennet, what a coincidence! Are you walking to Bond Street again?”

“Why, Mr. Darcy, you have caught me once again. Some ladies just cannot stay away from the shops.”