Главная / Современные любовные романы / All Fall Down: A Novel 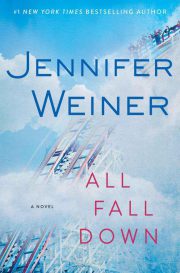 Jennifer Weiner - All Fall Down: A Novel краткое содержание

Allison Weiss has a great job…a handsome husband…an adorable daughter…and a secret.
Allison Weiss is a typical working mother, trying to balance a business, aging parents, a demanding daughter, and a marriage. But when the website she develops takes off, she finds herself challenged to the point of being completely overwhelmed. Her husband’s becoming distant, her daughter’s acting spoiled, her father is dealing with early Alzheimer’s, and her mother’s barely dealing at all. As she struggles to hold her home and work life together, and meet all of the needs of the people around her, Allison finds that the painkillers she was prescribed for a back injury help her deal with more than just physical discomfort—they help her feel calm and get her through her increasingly hectic days. Sure, she worries a bit that the bottles seem to empty a bit faster each week, but it’s not like she’s some Hollywood starlet partying all night, or a homeless person who’s lost everything. It’s not as if she has an actual problem.
However, when Allison’s use gets to the point that she can no longer control—or hide—it, she ends up in a world she never thought she’d experience outside of a movie theater: rehab. Amid the teenage heroin addicts, the alcoholic grandmothers, the barely-trained “recovery coaches,” and the counselors who seem to believe that one mode of recovery fits all, Allison struggles to get her life back on track, even as she’s convincing herself that she’s not as bad off as the women around her.
With a sparkling comedic touch and tender, true-to-life characterizations, All Fall Down is a tale of empowerment and redemption and Jennifer Weiner’s richest, most absorbing and timely story yet.

For my readers . . . who have come with me this far

Vera said: “Why do you feel you have to turn everything into a story?” So I told her why:

Because if I tell the story, I control the version.

Because if I tell the story, I can make you laugh, and I would rather have you laugh at me than feel sorry for me.

Because if I tell the story, it doesn’t hurt as much.

Because if I tell the story, I can get on with it.

Down the Rabbit Hole

Do you generally use alcohol or drugs more than once a week?

I hesitated with my hand over the page. I’d picked up the magazine to read the “How to Dress Right for Your Shape” story advertised on the cover, but it had opened to a quiz that asked “Has Your Drinking or Drug Use Become a Problem?” and something had made me stop. Maybe it was the black-and-white photograph of a woman in profile, bending sadly over her wineglass, or maybe the statistic beside it that said that prescription painkiller overdose was now the leading cause of accidental death of women in America, surpassing even car crashes. I had a pen in my hand—I’d been using it to fill out the stack of forms for Eloise’s five-year-old well-child checkup—and, almost without thinking, I made an X in the box for “Yes.”

I crossed my legs and looked around Dr. McCarthy’s waiting area, suddenly worried that someone had seen what I’d written. Of course, no one was paying any attention to my little corner of the couch. Sleet ticked at the panes of the oversized windows; a radiator clunked in the corner. The lamplit room, on the third floor of an office building at the corner of Ninth and Chestnut, with a volunteer in a striped pinny at a knee-high table reading Amelia Bedelia to kids sitting in miniature chairs, felt cozy, a respite from the miserable winter weather. Three years ago my husband, Dave, my daughter, and I had moved out of Center City and into a house in Haverford that I refused to call a McMansion, even though that’s exactly what it was, but I loved Ellie’s pediatrician so much that I’d never even tried to find a suburban replacement. So here we were, more than half a year late for Ellie’s checkup, in the office where I’d been taking her since she was just a week old. We’d parked in the lot on Ninth Street and trekked through the February slush to get here, Ellie stepping delicately over the piles of crusted, dirty snow and the ankle-deep, icy puddles at the corners, complaining that her feet were getting wet and her socks were getting splashy. I’d lured her on with the promise of a treat at Federal Donuts when her checkup was over.

Ellie tugged at my sleeve. “How much longer?”

“Honey, I really can’t say. The doctors need to take care of the sick kids first, and you, Miss Lucky, are not sick.”

She stuck out her lower lip in a cartoonish pout. “It isn’t FAIR. We made an APPOINTMENT.”

“True. But remember when you had that bad sore throat? Dr. McCarthy saw you right away. Even before the kids who had appointments.”

She narrowed her eyes and nibbled at her lip before dropping her voice to a stage whisper that was slightly more hushed than your average yell. “I am having an idea. Maybe we could tell the nurse lady that I have a sore throat now!”

Ellie considered this. “I hate karmel.” She smoothed her skirt and wandered off toward the toy basket. I recrossed my legs and checked out the crowd.

The room was predictably full. There were first-time mothers from Queen Village and Society Hill, who wore their babies wrapped in yards of organic cotton hand-dyed and woven by indigenous Peruvian craftswomen who were paid a living wage. The moms from the Section 8 housing pushed secondhand strollers and fed their infants from plastic bottles, as opposed to ostentatiously breast-feeding or slipping the baby a few ounces of organic formula in a BPA-free bottle with a silicone-free nipple hidden under a prettily patterned, adorably named nursing cover-up (I’d worn one called the Hooter Hider).

On the days when you use drugs or alcohol, do you usually have three drinks/doses or more?

Define “dose.” One Percocet, from the bottle I got after I had my wisdom teeth pulled? Two Vicodin, prescribed for a herniated disc I suffered in a step class at the gym? I’d never taken more than two of anything, except the day after my father had been diagnosed with Alzheimer’s and my mother had set up a temporary fortress in our guest room. Could three pills count as a single dose? I decided not to answer.

Do you use drugs or alcohol to “unwind” or “relax”?

Hello. That’s what they’re there for. And was that so bad, really? How many times had I heard my husband say “I need to go for a run,” or my best friend, Janet, say “I need a glass of wine”? What I did was no different. It was, actually, better. A run was time-consuming and sweaty and hard on the joints, and wine could stain.

“Hang on, sweetie,” I said, as my iPhone rang in my purse. “Just one minute.”

“Shh,” I whispered, before hurrying toward the door, where I could keep an eye on her while I talked. “Hi, Sarah.”

“Allison,” said Sarah, in the gruff, all-business tone that surprised people, given her petite frame, sleek black bob, and freckled button nose. “Did the fact-checker call?”

“Not today.” The Wall Street Journal was in the midst of its every-six-months rediscovery that women were online. They were doing a piece on women who blog, and Ladiesroom.com, the website that I wrote for and Sarah ran, was to be featured. I was alternately giddy at the thought of how the publicity would raise Ladiesroom’s profile and nauseous at the notion of my picture in print.

“She just read my quotes back to me,” said Sarah. “They sounded great. I’ve really got a good feeling about this!”

My daughter was standing about six inches from my face, brown eyes brimming, lower lip quivering. “Gotta go,” I told Sarah. “We’re at the doctor’s.”

“Oh, God. Is everything okay?”

“As okay as it ever is!” I said, striving to inject good cheer into my tone before I slipped the phone back into my purse. Sarah, technically my boss, was twenty-seven and childless. She knew I was a mother—that was, after all, why she’d hired me, to give readers live, from-the-trenches reports on married-with-children life. But I tried to be a model employee, always available to talk through edits or help brainstorm a headline, even if Ellie was with me. I also tried to be a model mother, making Ellie feel like she was the center of my universe, that I was entirely present for her, even when I was on the phone, debating, say, the use of “strident” versus “emphatic,” or arguing about which picture of Hillary Clinton to use to illustrate another will-she-or-won’t-she-run story. It was a lot of juggling and quick switching and keeping my smile in place. “Sorry, honey. What do you need?”

“I’m FIRSTY,” she said, in the same tone of voice an old-school Broadway actress might use to announce her imminent demise.

“But that is where the SICK kids are.” A tear rolled down my daughter’s pillowy cheek.

“Ellie. Don’t be such a drama queen. Just go get a drink. You’ll be fine.”

“Can I check what is in your purse?” she wheedled. Before I could answer, she’d plunged both hands into my bag and deftly removed my bottle of Vitaminwater.

“Ellie, that’s—” Before I got the word “Mommy’s” out of my mouth, she’d twisted off the cap and started gulping.

Our eyes met. Mine were undoubtedly beseeching, hers sparkled with mischief and satisfaction. I considered my options. I could punish her, tell her no screens and no SpongeBob tonight, then endure—and force everyone else in the room to endure—the inevitable screaming meltdown. I could ignore what she’d done, reinforcing the notion that bad behavior got her exactly what she wanted. I could take her outside and talk to her there, but then the receptionist would, of course, call us when we were in the hall, which meant I’d get the pleasure of a tantrum on top of another half-hour wait.

“We will discuss this in the car. Do you understand me?” I maintained the steady eye contact that the latest parenting book I’d read had recommended, my body language and tone letting her know that I was in charge, and hoped the other mothers weren’t taking in this scene and laughing. Ellie took another defiant swig, then let a mouthful of zero-calorie lemon-flavored drink dribble back into the bottle, which she handed back to me.

She giggled. “Here, Mommy, you can have the rest,” she said, and skipped across the waiting room with my iPhone flashing in her hand. Lately she’d become addicted to a game called Style Queen, the object of which was to earn points to purchase accessories and makeup for a cartoon avatar who was all long hair and high heels. The more accessories you won for your avatar—shoes, hats, scarves, a makeup kit—the more levels of the game you could access. With each level, Ellie had explained to me, with many heaved sighs and eye rolls, you could get a new boyfriend.