Главная / Проза / Against the Wall 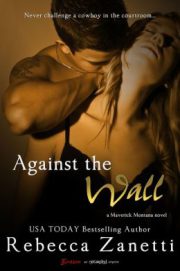 Never challenge a cowboy in the courtroom…
Surveying the proposed site for a high-end golf course should have been a breeze for spunky Landscape Architect Sophie Smith. But when this born-and-bred city girl is suddenly—and quite literally—swept off her feet by a sexy cowboy on horseback, she realizes that the country life has some serious (and seriously steamy!) possibilities. That is, until she finds out exactly who her smokin’-hot wrangler really is.
Cowboy and Tribal lawyer Jake Lodge is desperately trying to block the development. And if that means playing hardball—and being every inch the shark lawyer—so be it. But Sophie is a distraction he didn’t expect. A distraction that makes his blood burn.
Two different worlds. Two opposing sides. And when they finally give into the exquisite temptation, the consequences will shake the foundations of both of their lives…

This book is dedicated to my friend Tina Jacobson, who has supported my writing from the beginning…and who also came up with the name for this book.

The silence bordered on bizarre.

Shouldn’t there be crickets chirping? Birds squawking? Even the howl of a hungry wolf in the muted forest? Of course, such sounds would send a city girl like Sophie Smith barreling back through the trees to her rented Jeep Cherokee. The quiet peace had relaxed her into wandering far into the forested depths, but now the trees huddled closer together, looming in warning.

Enough of this crap. Time to head back to the car.

Her only warning was the crack of a stick under a powerful hoof, a thumping, and a shouted, “Look out!” A broad arm lifted her through the air. The arm banded solidly around her waist, and her rear slammed onto the back of a rushing horse. She yelped, straddling the animal and digging her hands into its mane. The image of the man attached to the arm flashed through her brain, while his rock-hard body warmed her from behind.

Not a wannabe cowboy from a bar in the city. A real cowboy.

The image of thick black hair, hard-cut jaw, and Stetson hat burst through her shocked mind as muscled thighs gripped both the back of a massive stallion and her hips. The beast ran full bore over rough ground.

Only the sinewed forearm around her waist kept her from flying through the air.

This wasn’t happening. Sophie shut her mouth on a scream as the powerful animal gracefully leaped over a fallen log and her captor pulled her into his solid body. He moved as one with the animal. Her hands fisted the silky mane like it was a lifeline to reality.

Screw this. She threw back an elbow and twisted to the side, fear and anger finally galvanizing her into action.

“Stop.” A deep voice issued the command as warm breath brushed her cheekbone.

With a mere tightening of his thighs on the great animal, they skidded to a stop. The arm trapping her shifted so she slid easily to the ground and stayed around her waist until she regained her footing. With a sound that was more growl than gasp, she backed away from man and mount until she collapsed against the bark of a towering tree. The horse tossed his head and snorted at her retreat.

The man sat straight and tall on the animal, dark and curious eyes considering her.

The smell of wet moss surrounded her. She gulped in air and studied him. He was huge—and packed hard. Scuffed cowboy boots pressed down on the stirrups while a dark T-shirt outlined impressive muscles. Long lashes framed incredible eyes, and she could swear a dark eyebrow lifted in amusement.

Two more horses charged suddenly through the meadow, sliding to a swift stop behind her captor. One animal was a pretty white, the other a spotted paint, and both held powerful cowboys complete with boots, jeans, and Stetsons. All wore black hats—like the villains in every Western movie ever filmed.

“Unbelievable,” she muttered under her breath.

At her voice, her captor jumped gracefully off his mount and stepped toward her.

“What should we do with her?” the man on the white horse asked. His gravelly voice contrasted oddly with the glint of humor in his tawny eyes. Filtered sunlight illuminated the gold, brown, and even black hair flowing unchecked around his shoulders. He was a symphony of twilight, where the other men wore the ominous tone of midnight.

“I caught her. I get to keep her,” her captor said, his eyes intent as he took another step toward her, firm muscles bunching in his upper arms.

“Another step, and you get to land on your ass.” Sophie readied herself to target his knees as fear uncoiled in her stomach. He stood at least a foot taller than her own five foot four.

His grin was quick and unexpected. It also added to the nerves still jumping in her belly. He might be a psychotic throwback to the pioneer days, but he belonged on a Calvin Klein underwear billboard.

The forest pressed in, and a smattering of pinecones hit the earth. Their soft, fragrant thunks shot adrenaline through her veins. Something high in the tree twittered a soft screech, reminding her she was far from home.

She centered her breath and decided on a groin shot.

Just then, a happy feminine shout yanked her attention toward a petite young woman rushing toward the horses. The female whirlwind all but collided with Sophie’s tormentor. “Jake, you’re the best! I got the best picture ever. The action shots are amazing.”

The woman released Jake and jumped at Sophie to grab both hands. “Oh my God, didn’t you hear them coming? They nearly mowed you down. But Jake has great reflexes—he saved you. The picture is phenomenal. Your eyes were huge, and you looked so scared! I am going to nail this project.”

Sophie wrinkled her brow at the stunning woman. She had long black hair, straight features, and aquamarine eyes, which were alight with happiness as she pumped Sophie’s hands in her own.

“You’re welcome?” Sophie pressed her backside against the tree trunk.

The woman threw back her head and laughed. “I’m Dawn, and you already met my brother Jake.” She gestured behind her to the motionless cowboy. “Those are my brothers Quinn and Colton.”

“Ma’am,” both men said, tugging on hat brims while remaining perched comfortably on their stallions. Colton had the colorful array of hair, while Quinn’s hair and eyes were as dark as Jake’s.

Dawn stomped wet grass off her boots. “We’re from the Kooskia Tribe. I was trying to capture a historical action shot, but you stepped right into their path. This was perfect.” She patted Sophie’s hand. “Don’t worry. You weren’t in any danger. Jake’s an excellent rider.”

Wait a freakin’ minute. Sophie glared at Jake. What an asshole. “Why didn’t you put me down sooner?”

“Sorry if we scared you,” he said softly, his eyes anything but apologetic as his generous lips tipped in humor. “Dawn needed a picture for her senior project, and I didn’t want to stop until I was sure she’d gotten what she needed. It was a long setup—or so she told us.”

Temper stirred at the base of Sophie’s neck. “I caught her? I get to keep her?”

“Yeah, you looked ready to faint,” Quinn said as his horse tossed its head and sidestepped in a graceful prance.

“Actually,” Jake said, his eyes narrowing, “she had shifted her stance to kick me in the knees.” He cocked his head, almost seeming wishful she had tried it.

She wondered if she could’ve taken him down and ignored the annoying voice in the back of her head laughing hysterically.

“Really?” Colton grinned. “I would’ve liked to see that.”

“Me, too.” Sophie returned his grin, and her temper dissipated. She bet she had looked terrified. She had been.

“I’m a senior at the University of Montana, and for my photography project, I need to capture a series of action shots. There’s nothing like horses rushing through shadowed trees to show action.” Dawn smiled even white teeth. “You’re probably lucky Jake was able to pick you up before running you over.”

Sophie cleared her throat, her gaze lifting again to Jake. Warmth spread through her abdomen. The man standing so solidly next to wild beasts and surrounded by untamed land was something new and definitely out of her experience. He was all male, and something feminine in her, deep down, stretched awake. Her heart kicked back into gear. Fighting her suddenly alive libido, she smoothed her face into curious lines. “Why didn’t you just shout for me to get out of the way?”

He cocked his head to the side, those dark eyes softening. “I did, but you didn’t move fast enough. One second the trail was clear, the next you were about to get trampled. I turned my horse and grabbed you before one of my brothers could run you over.”

So he had actually saved her. Sure, he’d had some fun at her expense, but at least if she needed to kick him later for it, she still had legs. She lifted her chin. “Thanks for the rescue.”

His cheek creased with a dimple before he turned and remounted his horse. “Any time, Sunshine.”

“What were you doing in our forest, anyway?” Dawn asked.

Sophie’s heart dropped to her stomach. This was where the niceties stopped. “I’m Sophie Smith from Green Par Designs.”

That was an easy, accepting tone. Sophie frowned. “Yes. I’m here to design the golf course next to the lake, so I was checking out the land.” Now the pretty woman would get angry, considering the Kooskia Tribe opposed the project. The pine-filled canopy blocked the sun’s warmth, and Sophie shivered.

“Oh. Well, that explains it, then.” Dawn tossed ebony hair out of her face.

Sophie gaped and quickly closed her mouth. “Aren’t you opposed to the golf course?”

“Of course. For one thing, it’s bad placement because the fertilizers will pollute the lake.” Dawn softened her rebuke with a smile.

“And the other thing?” Sophie asked.

Dawn shrugged. “The land doesn’t want the golf course there.”

“Yep.” Dawn tugged her toward the clearing. “Come on, I’ll show you my shot before Jake takes you back to your car. Thanks again for the picture—it was perfect.”

“You’re welcome.” Sophie shook her head and let the woman lead her from the forest while three muscled cowboys followed tamely behind them.