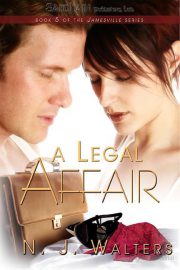 A night of secret passion could immerse this lawyer in red-hot gossip. Book 5 of the Jamesville series. Alicia Flint enjoys her community, her home, and her career as a lawyer. But since her livelihood depends on her spotless reputation, it’s not easy to even date in this small town, much less take a lover. Then a chance encounter with a stranger at a friend’s wedding tempts her to do something she’s never done before-have a red-hot, one-night stand. The guy will be gone tomorrow; no one need ever know her delicious little secret. Gill Baron has come to Jamesville to visit friends and figure out what he wants to do with the rest of his life. As a newly retired, burnt-out cop, he’s not looking for love, but he won’t say not to a night of no-strings sex with the seductive brunette. A night that leaves him wanting more. When she meets the investigator on her latest case, Alicia is shocked to come face-to-face with Mr. One-Night-Stand. Jamesville doesn’t need another lawyer-related scandal to gossip about, but the truth is, she needs Gill’s top-notch investigative skills. Their attraction is too deep to keep the town clueless of their affair forever. When Jamesville finds out, Alicia wonders if her reputation-and her relationship with Gill-will weather the storm. Warning, this title contains very explicit sex and lots of it

To all the readers who have come to love the inhabitants of Jamesville as much as I have, thank you for your encouragement and support.

Thank you to my amazing husband, who continues to encourage me every single day of my life. I couldn’t do this without you.

And thank you to Heidi, my amazing editor, who keeps me on the straight and narrow. I appreciate all your hard work!

Gill Baron watched the laughing, twirling crowd on the dance floor, wondering how the hell he’d found himself at the wedding of two people he’d met only yesterday. He took a long pull from his beer before setting the bottle back down on the table in front of him, all the while scanning the room. It was an old habit. One he couldn’t break.

As a cop—retired cop, he reminded himself for at least the tenth time today—it was second nature for him to assess his surroundings and all the people in it. He was still having a hard time believing he’d actually done it, retired from the police force in Alabama after twenty years on the job.

But he’d seen enough. More than any person should have to see in a lifetime. If he closed his eyes, he could see their faces. The innocents he hadn’t been quick enough to save, or simply hadn’t been able to help. Their faces haunted his sleep. When they’d begun to haunt his waking hours, he’d known it was time for him to get out before his job consumed him.

He took solace in the fact that he had made a difference. The red-haired woman currently dancing with her adoring husband was proof of that. Shannon Brooker, now Shannon O’Rourke, was one of the people he’d helped, and he now considered both her and her husband, Patrick, good friends.

Gill still wasn’t quite sure why he’d come here. When he’d finished his last day on the job, he’d thrown some clothing in a suitcase, and headed out of Alabama. He’d kept driving, stopping whenever the whim struck him, with no destination in mind. Or so he’d thought until he’d reached the sign announcing the town of Jamesville several days later.

Sighing, he took another swallow of his warm beer. This was his first one and would probably be his last. He didn’t drink much, as it interfered with his ability to assess and react to any situation that might arise.

Shannon and Patrick had welcomed him into their home and introduced him to Patrick’s family. It was Patrick’s brother, Shamus, who was the groom at today’s wedding. He’d married Cyndi Marks in a simple ceremony a few hours earlier.

Life sure was funny sometimes.

They were a loud, boisterous bunch, but you could see the connection, the bonds between them. His only family was a sister who lived all the way out in California with her second husband. They rarely saw one another, but his sister was happy and settled, and that was good enough for him.

Now, if he could only figure out what he was going to do with the rest of his life, he’d be a happy man. He’d known he wanted, no needed a change. There were plenty of options for him to explore, but he’d put off making any definite plans. Since actually putting in his notice, he’d been restless. Uncertain. It wasn’t like him at all.

Patrick had invited him to stay for a while, and he planned on taking him up on the offer. Maybe a few days of rest and relaxation would clear his brain.

The three-piece band currently belting out a popular country song was actually quite good. He tapped his toe, keeping time as the six couples on the floor moved to the music.

Other folks milled around the room, snacking from the mouthwatering buffet that had been set up in the dining room.

The reception was being held at Stone Manor, the bride’s B & B. Barely open, the new bed and breakfast was a sight to behold. Filled with antiques, yet with no pretension.

The living room was large and formal, yet the way the room was arranged gave it an air of intimacy. The large stone hearth had a fire cheerfully crackling in it. There were sofas and chairs pushed against the walls to create a dancing area in the middle of the floor up at the far end. Down at the other end, there was a sitting area and some tables scattered around where people could set their food and drinks. It was currently filled with happy wedding guests, and one stranger, if he counted himself.

Gill sat right at the edge of the dance floor, near the middle section of the room, with a small, round table in front of him. His back was to the wall and he was close to one of the two entrances. There were about fifty other people surrounding him, all enjoying themselves. One woman in particular kept catching his eye. He’d noticed her during the wedding ceremony, and then later as she drifted through the buffet line. At the moment, she was ensconced in a chair almost directly across from him.

About five-six in height, she appeared taller, not only because she was wearing heels, but also because of the way she carried herself. She projected command and authority, but at the same time didn’t appear standoffish.

He leaned back in his chair, laid his foot across his knee and allowed himself to just watch her. She was wearing a long-sleeved black dress made of some soft-looking fabric that fell past her knees. The neckline wasn’t particularly low, but he could just see the slight swell of her breasts above it. The material clung to her body, accentuating the dip of her waist and the swell of her hips.

Gill felt his cock stir, which surprised him. It has been quite some time since he’d felt any interest in the opposite sex. His job hadn’t been conducive to long-term relationships—too many odd hours and too much he couldn’t, or wouldn’t, talk about.

Not that women were in short supply. Hell, he could find a willing woman in just about any downtown bar on a Friday or Saturday night. That would be fine if all he wanted was to get laid. But that kind of meaningless physical release hadn’t appealed to him in years.

His last relationship had ended after only six months. That was—he had to stop and think about it—over two years ago.

He didn’t miss her particularly, but he did miss the feel of turning over in bed at night and having a warm, soft, woman lying next to him. He missed sharing meals with another person and having someone there when he finally found his way home after a long day of work.

He was getting maudlin in his old age. At forty-two, he was still in the prime of his life. It had to be the wedding and the fact that he was at a crossroads in his life making him think about such things.

As if she could sense his interest, his mystery woman turned her head and stared right at him. His body responded immediately, making his pants even more uncomfortable than they had been. Her short black hair framed her face, with spiky bangs drifting across her forehead. Her features were well-defined with high cheekbones, a slightly pointed chin and a slender nose. Her lips weren’t overly plump, nor were they too thin. The deep colored lipstick she wore accentuated them and made him wonder what they’d taste like. He’d really like those lips touching him…everywhere.

Tiny gold earrings winked from her ears and a double strand of pearls wrapped around her neck and fell almost to her waist. Her stockings were sheer and her shoes were black and high-heeled, but not too high. Maybe three inches.

She raised a finely arched eyebrow in question and he almost smiled. There was such command behind that small gesture. He was curious to know what color her eyes were. It was hard to tell from this distance, but if he were a betting man, he’d say green.

Somehow, green eyes would suit her.

She’d come alone. He’d noticed that right away. And she wasn’t wearing a wedding ring. Not that that meant much nowadays. But she didn’t strike him as the type of woman who’d cheat on her man. There was too much pride in the set of her shoulders and her gaze was forthright and honest.

The last thing he needed to do was have a one-night stand with a local woman, and someone who his hosts obviously knew, or she wouldn’t be at the wedding. Still, his body disagreed with his assessment of the situation, his cock pressing hard against the zipper of his jeans, letting him know that it thought the idea of a one-night stand was just dandy.

Gill hadn’t been expecting to attend such a formal function while on holiday, and hadn’t packed any dress clothes. Thankfully, he’d brought along a sports coat and a few shirts so he wasn’t totally out of place among the tuxedoes and suits.

Why the hell he was worried about what he was wearing, he didn’t know. Obviously, he’d had too much to drink. He pushed his lone beer away and drummed his fingers on the arm of his chair.

As much as his mystery woman physically aroused him, Gill knew it wouldn’t be smart to pursue either the attraction or her. Maybe it was time for him to thank his hosts and head back to Patrick and Shannon’s place for the night.

He glanced at his watch. It was only ten o’clock and this party would probably go on for hours yet. When he looked back up, she was no longer sitting in her chair. With a sure, steady stride, she was headed directly for him.

Gill straightened in his seat and rose as she approached him. He felt his lips curve upward. He’d been right. Her eyes were green.

Alicia Flint sat on the edge of the crowd, toying with her glass of white wine as she watched her biggest client and good friend, Cyndi, dance with her new husband. The two of them were a perfect couple even though Shamus was almost ten years younger than Cyndi. Somehow, between them, the age difference didn’t matter.